It should come as no surprise that despite this show having “revenge” in its title, it’s looking less likely all the time that Masamune will actually want to dump Adagaki once they become a going concern. He’s had an idea of her in his head all these years as an object of rueful loathing, but actually getting to know her is gradually rewriting that idea.

Despite gaining the tacit support of Koiwai in his revenge efforts, Masamune comes up with something all on his own: a wager with Masamune concerning test scores. Koiwai seemingly abstains from assisting, and Masamune even thinks she double-crossed him by slipping him laxatives during a test, but it turns out he ate bad eggs. 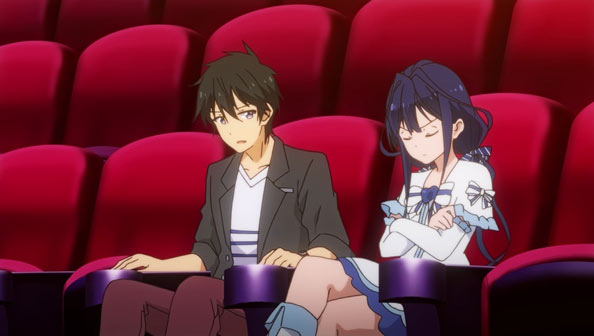 When the results of the test wager are inconclusive, Koiwai redeems Masamune’s confidence by arranging for Adagaki to go on a date with him out of concern that he’s an emotional wreck. Koiwai is well aware of the immense trust Adagaki has in her obedient maid, but stops short of telling Masamune exactly why she’s helping him out.

Koiwai’s motives aside, Adagaki is very game for the date, and reveals her inexperience with the practice of courtship by arriving in a costume to “break the ice.” She puts up smug airs, but also hides behind Masamune’s broad back when a creep tries to snap a picture of her, and gets all freaked out by a horror movie.

Adagaki isn’t just inexperienced in dating, but in interacting with people on equal terms. With a maid and an army of servants at school, she’s used to being waited on hand and foot. But as he watches her argue with a small child about why she’s dressed so weird, it dawns on him he’s been letting her get away with the cosplay thing all day, sparing her the embarrasment. He’s going soft! 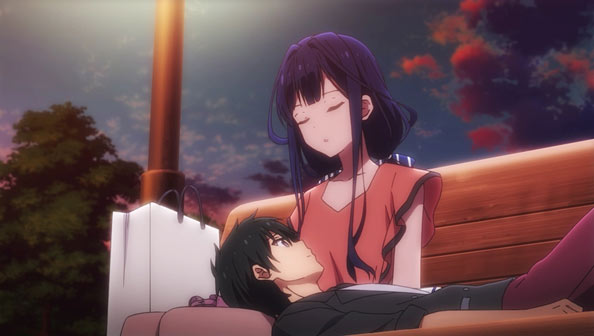 Back when Masamune was a little fat kid, Adagaki called him pathetic and urged him to get stronger…which is exactly what he did. After accidentally walking in on her changing and hitting his head, he wakes up to find his head is in her lap and she’s asleep. After tasting her venom, back then and more recently, the date showed her some of her other facets, including vulnerability and kindness.

Koiwai knows Masamune is “Pig’s Foot”, which means she knows how much Masamune worked to improve himself physically and academically to become the chick magnet he is today. Now she intends to use him to improve Adagaki, and in true tough love fashion, believes getting dumped might do the trick. The only issue is, will Masamune actually do it? I have my doubts.

Minene tries to take out the Third, holder of the Murder Diary, but his suit is impervious to gunfire and bombs. She’s cuffed by Detective Nishijima, but manages to escape his custody by getting on his good side and shooting him. Meanwhile, Akise sets Yuki up with Yuno for a day at a wedding rehersal, which only makes it harder for him to confess to her that he’s not really in love with her. When night falls, Yuki takes her to her house, where Akise has been snooping around. The room full of corpses is gone, as are her memories of Yuki’s first visit.

Yuno may be whacked out of her gourd to the point of burying memories – and whole rooms of her house, but she’s not half as annoying as Yukiteru Amano. Seriously, his inner monologues are like nails on a chalkboard. Are we really supposed to hate him this much? Because we do. You’d think he’d realize by now the only reason Yuno is remotely lucid and under control is because she thinks he loves him. Why in the name of all that is holy would he go back on those words? Forget that she’d be crushed, she’d crush him.

At least he briefly enjoys a day of pretending to get married – which is frankly a pretty odd yet effective diversion while Akise checks out Yuno’s creepy, powerless house. At this point, the house is almost like a silly set for a horror movie. It’s dark, dirty, and threatening. But there are some practical issues that vex us; like how Yuno manages to stay so clean in a house like that, and how she shows no signs of physical stress from digging such a humongous hole out back. But it definitely helps her crazy cred.