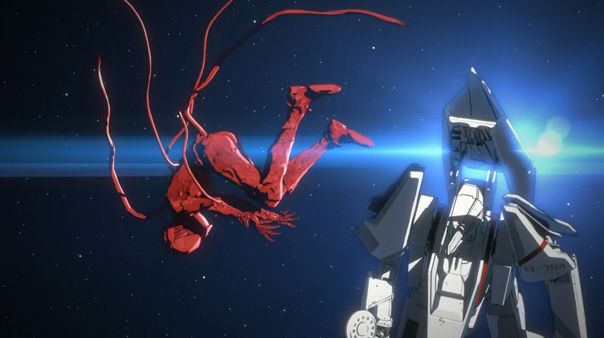 The Gauna may be frightening and powerful and immensely creepy, but they’re still life forms, which has us wondering what their beef with humanity is. Do they act out of pure instinct, or reason? When they make a placenta clone of Shizuka who giggles and reports each time she takes out a Gardes frame, are they fucking with them, or is the perceived sadism mere coincidence?

I could fill a review with what I don’t know about the Gauna, and another with questions, but you know what? I kinda like not knowing. The Cylons in the re-booted Battlestar Galactica were a classic example of the age-old problem with learning way too much about the “Bad Guys”: they get less scary. Right now, the Gauna still frighten me, and that’s the way it should be in a show where two of them are enough to cripple Sidonia if they find their way inside.

On the other hand, the more I learn about the “Good Guys”, the more I can connect and care about them surviving. We learn a great deal more about Sidonia’s history through flashbacks. The first half of the episode reinforces why we should fear the Gauna; the second half shows us the people who shaped the present Nagate and Izana inhabit.

Some of those shapers are still around, like Kobayashi, Lala, and Izana’s “grandmother” Yure; others, like Nagate’s “grandfather”, Saitou Hiroki, aren’t. The four were among less than 450 colonists to survive the Gauna slaughter a century ago. They all danced on the razor’s edge of oblivion that day; to avoid falling off, they had to turn to creative genetics. 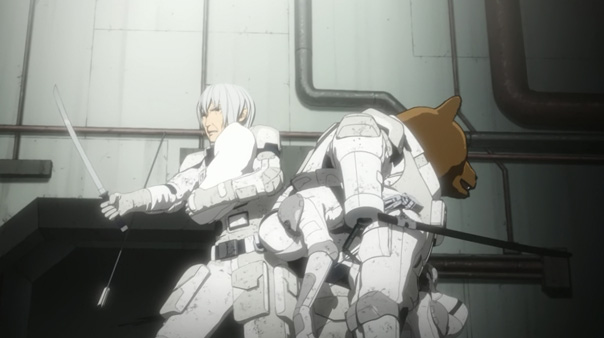 Immortals were forbidden from procreating, but when an aged Hiroki, who had been Sidonia’s ace, returned after being lost for eighty years, Kobayashi broke the rules, collaborating with Yure to clone him. After a kick-ass sword fight with bows and arrows (!), Saitou fled to the bowels of Sidonia, where he raised and trained Nagate—immortal from birth—all by himself.

And that’s pretty much where we stand today: Nagate is a threat to the old guard, tolerated only because of Kobayashi’s influence and because she repeatedly sends him out on ridiculously dangerous sorties. But he’s also the hope of humanity, someone you imagine will blow by Kunato (who didn’t look so good this week) to become Sidonia’s new ace. 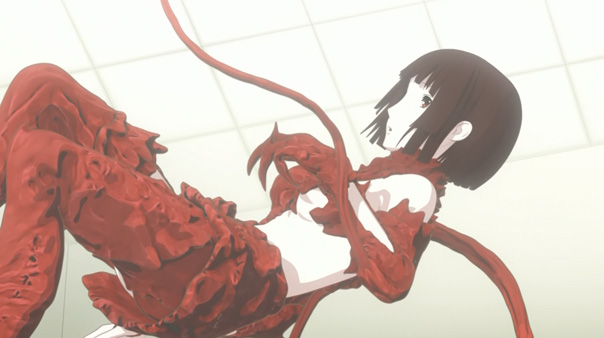 He didn’t get to face off against “Hawk Moth” (what they’re calling the Gauna-Shizuka), this week, and he doesn’t seem quite ready to do so, but I feel like that battle is coming sooner or later. In the meantime, Sidonia’s eggheads have a creepy placenta clone of his would-be girlfriend. Is she a Gauna instrument of communication? An insidious weapon? A biological by-product? As I said: I hope we don’t learn too much. 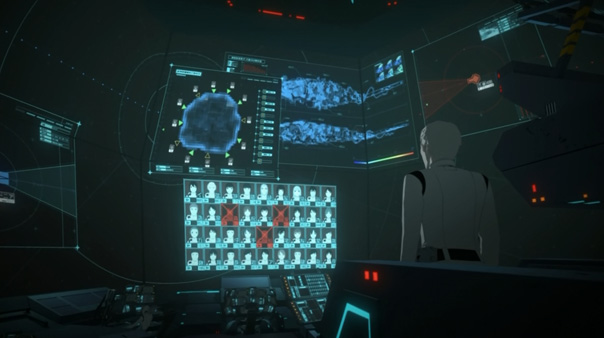 I had a feeling Hoshijiro Shizuka (whose kanji I’ve learned also mean “silent star”) would fall at some point, and stay fallen (note that I didn’t say “dead”, more on that later), based on the simple fact she’s only listed as a supporting character, as opposed to Izana’s main billing. But last week, that fact was dropped in my—and Nagate’s—lap like a dead cat, so it didn’t quite feel real…yet.

This week, we get to see the doomed mission that claims Shizuka, and learn that it was Kunato—using the private channel, the sniveling punk—who caused Nagate’s screw-up, which led to a momentary lapse in concentration. And all space needs is a moment to kill you or someone you love. Despite knowing how badly this would all turn out, it was still thrilling every step of the way, right up to the point the knife was twisted.

What’s even darker about Kunato’s vendetta is that he’s seen enough of Nagate and Shizuka to know that if one of them got into trouble, the other would go after, against orders or reason. Heck, his little scheme could have ended up destroying his precious Tsugumori, too. In both cases, getting back at Nagate takes precedence over all other considerations, including defeating the Gauna.

Kunato is just one of many enemies and critics of Nagate to come out of the woodwork, not counting Nagate’s harshest critic: himself. Fortunately, he has allies as well; powerful ones like Kobayashi, who willfully ignores all calls to “do something” about him, almost as if she’s aware someone could be trying to sabotage him. Or maybe she just doesn’t want to admit to being wrong about him, or anything else.

Nagate also has his landladybear Hiyama and his not-presumptuously self-appointed best friend Izana to drag him out of his dusty room and his funk. A food vender mistakes Izana for a girl, probably because that’s what she’s slowly becoming because of Nagate. But most significant of his allies is his late gramps, who he remembers talking about a pilot having to show Resolve with a capital R—not coincidentally this episode’s title. 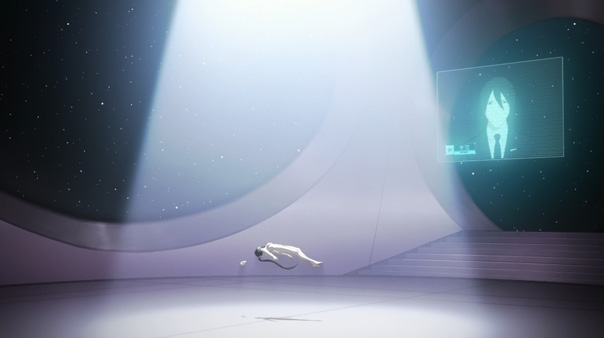 “The Gauna won’t wait for you to dry your tears,” Nagate recalls him saying. But whether it’s fear of (or grief from) loved ones dying, or one-sided rivals fucking with him, a pilot must shut it all out in order to perform. The Elite Four couldn’t do that, and got slaughtered. Kunato clearly can, but one day his recklessness could blow up in his face. Even Yuhata, promoted to Kobayashi’s XO (Damn, she rose faster than Amane!) exhibits an ability to Keep Calm and Carry On. 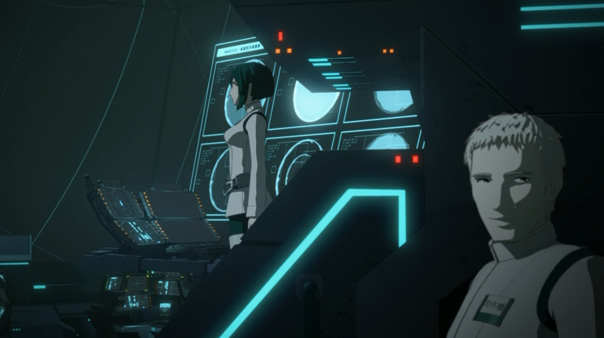 Shizuka let personal feelings affect her judgement out there, and as we see, the Gauna have little mercy for those who do so. The detailed-yet-split-second destruction of her frame was as heart-wrenching to watch as it was inevitable. The sight of her Gauna-corrupted frame emerging from the gas giant debris (an explosion we only saw in 8-bit, sadly) sent chills up my spine.

That’s because the “702” raggedly scrawled on its flesh-like coating (a stark contrast to the tidy fonts the humans use) suggests the Gauna aren’t as mindless as I first thought, inadvertently lending credence to the growing portion of the populace that believes the Gauna will cease their aggression if they cease theirs. But that won’t happen as long as Kobayashi’s in charge. She’s like an anime Adama.