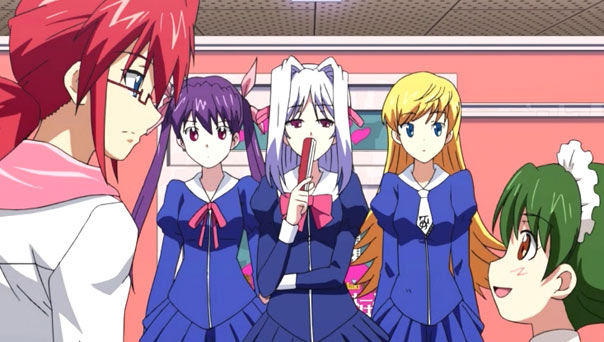 Kagami-sensei’s latest lecture kills two birds with one stone: teaching Irregular Twintails (Makina) the true dignity of maids (Akiba, not regular), while encouraging Potatoes (Kiriko) to get back to doing what she loves: performing as the underground maid idol and YouTube sensation “Cutter Girl.”

Makina puts up a fight, offering her Wikipedic knowledge of real-world maids and dismissing the Akiba kind as “fakes.” Even so, she agrees to serve as a maid at a cafe run by a friend of Kagami’s who has gotten serving down to an intricate science.

Kagami, or rather the cafe where he brought Makina, makes a decent case for the dignity of Akiba maids by showing her the amount of skill, initiative, creativity, and people skills required to make a diverse array of “masters” happy. Sometimes that means acting cute or subservient…sometimes it means being standoffish and rude.

He paints maid cafes as a microcosm for society at large, but Makina fires back that most of society doesn’t “get” or approve of maid cafes, so she can’t let Kiriko continue lest she give the school a bad image.

In the B-part (which Kagami announces by tapping on the fourth-wall), Kagami arranges a live performance in front of a growing crowd of people, with the idea being if society doesn’t approve, she’ll make them approve by delivering a dazzling performance.

Potatoes, suddenly full of confidence, calls Makina’s bid, stating she’d be able to weather explusion better than not being able to do what she loves. She then takes the stage and becomes an instant hit online and off, with Kagami pulling the logistical strings. Now, it would hurt the school’s image if they did expel Potatoes.

While I’m glad the show seems to be back on track with regard to Kagami tackling the problems of a student or two per week, this will be my final review of Denpa Kyoushi. It’s far from terrible, and often downright charming. In a lighter season, or with higher quality visuals, I’d keep it. But the fact of the matter is I’m reviewing more shows than I want to this season, and Denpa’s iffy production values made it vulnerable for culling. 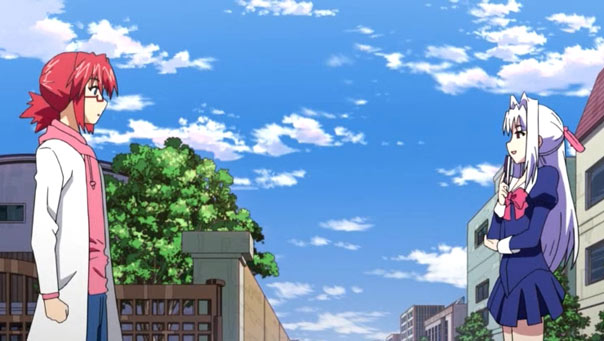 Kagami’s voluntary dismissal from school seemingly ended the “weekly student project” format I had become comfortable with and fond for, and all for reasons that didn’t do Kagami any favors in the likability department.

Still, like me, Hiiragi Koyomi (later nicknamed “Options” by Kagami because she herself says she’s loaded with them) has enjoyed watching Kagami improve the lives of his students with amusing methods, and wants to see more of that at her school.

Only Kagami doesn’t want to teach, so Hiiragi formulates an elaborate military operation, using all of the resources and connections at her disposal to track him down. I think the overarching joke is that Kagami isn’t really on the run, but just has a very busy schedule of YD activities in Akiba.

I’ll be honest, I didn’t dig the whole chase sequence. I’ve seen super-rich people put on much better shows than Hiiragi did here, and the show’s animation bordered on the putrid this week, and really didn’t do Akiba justice. Hiiragi’s minions also seemed particularly incompetent, and I wasn’t buying Kagami’s hacking prowess.

Am I being overly pedantic with a show not intending to be that serious? Perhaps; especially when the chase ends with Suzune literally throwing a big net over Kagami and then tossing him in a burlap sack. Still, it’s good to see Kagami brought back down to earth by his little sister (who knew he liked a certain voice actress) after he was able to defeat the might of Hiiragi family, Jack Bauer-style.

Hiiragi brings Kagami to his sister’s school, Icho, where he’ll teach first before moving up to Hiiragi. But even if its the poorer of the two schools, it’s still pretty fancy. There, Kagami meets Hiiragi’s No. 2, the mirthless twin-tail he quickly nicknames “Irregular Twintails.” Momozono resents Hiiragi recruiting this NEET “thing” just to make things more “amusing.”

Kagami can absorb Twintails’ barbs, but when she turns her ire on Shikishima Kiriko, a student being expelled for having a part time job at a maid cafe, the situation suddenly becomes YD for Kagami. He agree to take the job if Shikishima is reinstated, and vows to teach Momozono about the dignity of maid cafes. And jut like that, we seem to be back in the “weekly student project” format I didn’t mind. Denpa Kyoushi can keep its chase scenes.

Depna Kyoushi isn’t winning any beauty contests, but I don’t care as long as it keeps delivering interesting weekly student stories, each of which will inform a different part of Kagami Junichirou’s overarching story of whether he’s teacher material (which seems apparent), or more importantly to him, whether he yearns to teach (still up in the air).

This weeks student is the class rep, Yukina, who is upset that he’s slacking off in teaching the class. She shoplifts in Akiba to blow off steam, but Kagami happens to catch her in the act. Even without trying, kagami manages to teach one of his students a lesson, though in lecturing her about her actions affecting the lives of others rings as a bit hypocritical, considering he uses his YD philosophy to do what he wants, no matter who it affects. 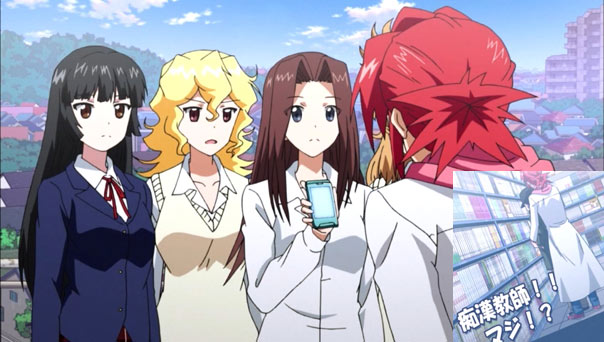 But the fact that his actions affect people in a positive way, as both Face Punch and Wicked Blondie are now BFFs, and both consider Kagami to be the one who made them better people and dream accordingly. The game he distributed to his class has also become a school-wide fad, bringing the kids closer together.

But when internet pics of Kagami appearing to molest someone break out, their faith in him is shaken, but not broken. That’s not the case with the rest of the class and school, which see the photographic evidence and conclude they were betrayed. Kagami is promptly fired after an interview, and it falls on Yukina to come clean about the truth of the anime store encounter.

When she happens to meet Kagami on a bridge that night (lots of coincidences in this show!) she learns that even if she does the right thing, it won’t bring Kgami back, because he was looking for an excuse to quit. His anime blog that he yearns to work on every waking moment he isn’t watching anime, dropped to second place, and in his YD-addled mind that’s more important to affecting positive change in youngsters.

Yukina doesn’t let him let her off the hook though. She comes clean to her classmates, and Kagami is exonerated in the eyes of the students, who are on his side at the ceremony announcing his dismissal form the school. He quiets them down with a stirring motivational speech about not letting rules get in the way of going after their dreams, and giving everyone a special weapon for thier mobile games…which means he was listening to Minako after all.

Having delivered his final lecture (though he should have told them to follow his blog), Kagami withdraws from the school, only to be cornered by Hiiragi Koyomi, fan-wielding chairperson of Hiiragi Academy, an even more prodigious school. She’s watched his month of progress with great interest, and wants him teaching at her school. Just when he thought he was out…