Much of this week’s story is told by the Tada family cat, Nyanko Big, who is over ten years old and hence not only knows a few things about life and the Tada family, but has a very deep voice that commands respect. But he’s also a fat-ass glutton, and so cannot leap nearly as far as he thinks he can. The cat-POV premise is a bit twee/hokey, but never offensively so; it’s mostly just charming. 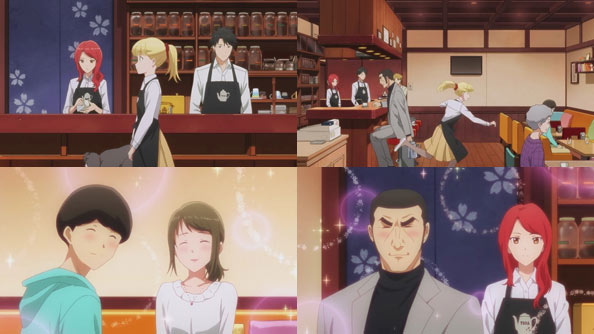 Nyanko Big observes Mitsuyoshi with Teresa and Alec, two human women even he can see are pretty special, but he knows the boy who saved him ten years ago has never been that into women. The universe seems committed to changing that, both by having Teresa and Alec live right next door to his home and family cafe, but have then help out at the cafe while his gramps is out.

We encounter both newcomers in a young nervous couple and regulars like an elderly couple and someone who gives off a hitman vibe but shares Teresa’s love for the Rainbow Shogun, and also has the reflexes to catch a pitcher of water Teresa nearly drops. 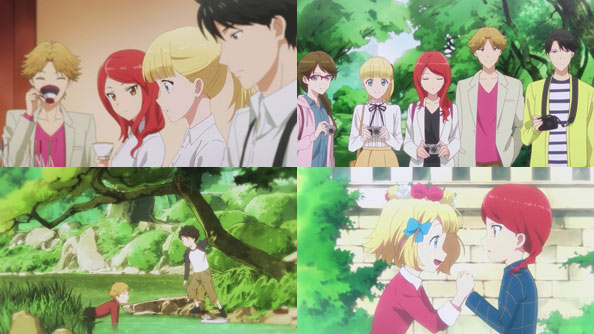 The group takes a break, during which time Mitsu makes everyone coffee, while Teresa provides “hot chocolate spoons” to dip in their cups. Mitsu nonchalantly takes a taste from Teresa’s cup, making it an unspoken indirect kiss, but he doesn’t seem to realize it.

Later, the photography club gathers at Hibiya Park for some Spring-themed photos, and not only does Ijuuin remember when Mitsuyoshi saved him from a “kappa” the river years ago, but Teresa remembers when Alec saved her after Teresa jumped in to retrieve the crown of flowers Alec made for her. 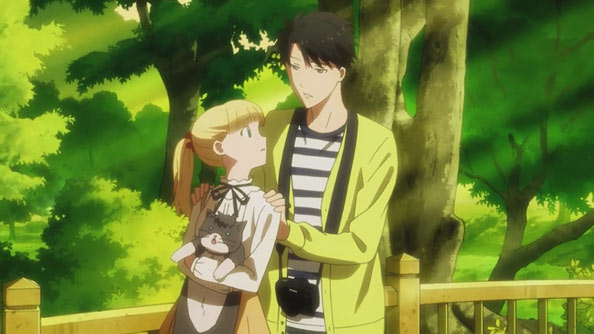 Nyanko Big, who had finished his patrol and was lounging in the park, encounters and falls in love with the local salon cat, Cherry, but once again his leap is far shorter than he’d like, and he ends up in the drink, then quickly up a tree.

But when he slips and falls, Teresa is there to catch him…and Mitsuyoshi is there to catch her. So far their romance has been extremely quiet and low-key, with no words at all said about it…save those of a cat. Whatever there is between Teresa and Mitsu, it’s clearly going to take some time.