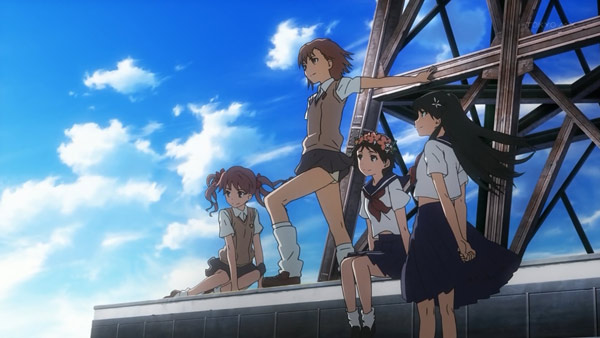 Mikoto, Shirai, Saten, and Uiharu are all prepping for a study group. Shirai notes how peaceful Academy City is, Mikoto checks in on the sisters, who are on the mend but will require treatment to extend their lifespans. Shirai bumps into Kongo, and later she and Mikoto cross paths with Mugino and Frenda. Mikoto, Shirai and Uiharu arrive at Saten’s place with their diverse yet complimentary ingredients  and they have a hot pot feast, which Haruue eventually joins as well.

With the Sisters vs. Accelerator arc completed, Railgun S exhales with a transitional episode with lots of light, pleasant slice-of-life which takes stock of where everyone is and, more importantly, serves as a vehicle to reunite the four core girls with something non-life-threatening. Mikoto’s duty had definitely distanced her not only from Shirai, but Saten and Uiharu as well, and the “hot pot study group” was a nice way to shorten that distance, at least until the next crisis (which isn’t hinted at this week; something we’re actually thankful for).

This episode was also a means of having various supporting characters make an appearence, including the Frog-Faced Doctor (AKA Heaven Canceler), Kongou Mitsuko (as stuck-up as ever), Shirai’s clover kids, and, perhaps most surprisingly, members of ITEM. Mugino/Frenda jaw with Mikoto/Shirai (and Shirai’s ignorance of who they are help the comedy here), but things don’t get out of hand, underlining this episode’s commitment to being peril- and stress-free, which after so much of both in the last arc, was welcome.

Editors Note: We apologize for being a bit behind on our weekend anime schedule, as we are currently engaged in various non-RABUJOI activities. Please excuse the lateness of the subsequent reviews.