Meteroa and Celestia quickly recover from the injuries sustained in last week’s battle. Matsubara is by Celestia’s bedside when she thanks him for the drawing and story that ultimately induced Altair’s retreat. Matsubara believes the people who deserve more of the credit are the masses who saw and liked the art. He also clarifies that he wrote her story as proof he lived, not simply for fun.

While taking Souta on a head-clearing, exhilarating ride in the Gigas Machina, Kanoya talks about how differently the creations all seem to approach their reason for being, but notes they’re all the same in that all they can do is what they’re meant to do: save the world, in the case of heroes (and threaten it in the case of the villains).

Creations like him who save the world only exist because worlds that have to be saved exist. Kanoya recognizes and respects Souta and the other creators’ role as the makers of those worlds, whether as proof they existed, or any number of different motivations creations simply don’t have access to. 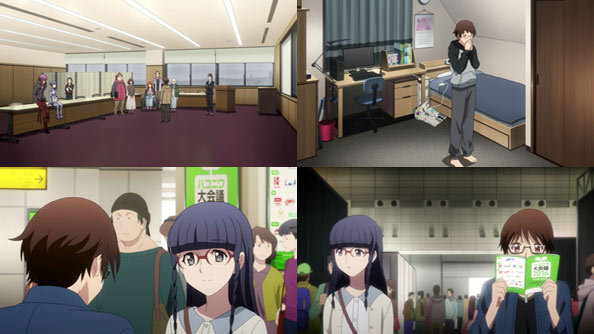 Kanoya gives Souta a lot to think about, and at the first meeting with Meteora back on her feet, discussing how a change in strategy is necessary, Souta provides the reason why: Altair’s creator is already dead, and he killed her.

From there, we travel back to Souta’s first contact with Shimazaki Setsuna, when she praised his drawing of Celestia. He liked her drawings, and she liked his, so they started an online friendship that eventually led to an in-person meetup.

When they meet at the station, we learn Shimazaki’s real name isn’t Setsuna, but Yuna, that Souta is exactly how she had hoped he would be. Yuna is also kind, beautiful, and adorable, in a way that makes watching her and Souta enjoy the day together, while knowing her ultimate fate, that much more heartbreaking.

Their day is suddenly infused with danger and dread but also intimacy when they arrive late to a presentation and Souta decides they should go up to a catwalk for a better view. Yuna slips and almost falls to her death, but Souta grabs her (thankfully well-made) purse strap and saves her.

The two are suddenly in each other’s arms, heavily breathing, and Yuna is excited by how much of an adventure the day has become. Souta then lends her his glasses, which she takes without hesitation and asks how she looks.

We know that despite the sweet start to their relationship, things gradually turn bitter, and while we had the broad strokes of how and why Shimazaki ultimately offed herself, it’s instructive to get the heartbreaking details.

Souta, who is, after all, only human and just a kid, gave in to envy and resentment as Shimazaki’s popularity on their art boards took off while he stagnated. Souta found he couldn’t be the supportive voice Shimazaki wanted and needed, and he drifted further and further away.

His supportive voice would’ve been of great help to Shimazaki with enduring the storm of hate that hit the boards when another poster—possibly also jealous of her—started the rumor of her plagiarizing work. From there, the mob was off to the races, viciously attacking her and suggesting she kill herself.

Throughout all this, Souta was merely an observer. While he initially felt he had to step in and try to help Shimazaki, he felt paralyzed by a number of things: the possibility of the mob turning on him, as well as the slight satisfaction he can’t deny he got from some of the criticism.

So while Souta didn’t plunge a sword in Yuna’s chest, he did nothing to stop others from doing so. It was a choice he made; the kind of choice Kanoya said creations don’t have; and it was the wrong choice.

Now the world is a place where Yuna is dead, her creation is loose and on a quest of vengeance. But his choice to come clean with the others wasa good one; hopefully the first of several he and the others will make and bring an end to Altair’s tempest.

Believing Chikujouin’s lies about Meteora being Mamika’s murder, Aliceteria goes all out against the sorceress, who borrows several missiles but can’t connect on any of them. Alice also counters Meteora’s summoned weapons with sommoned warriors of her own, who surround Meteora menacingly and try to catch her in a tangle of red laser beams. 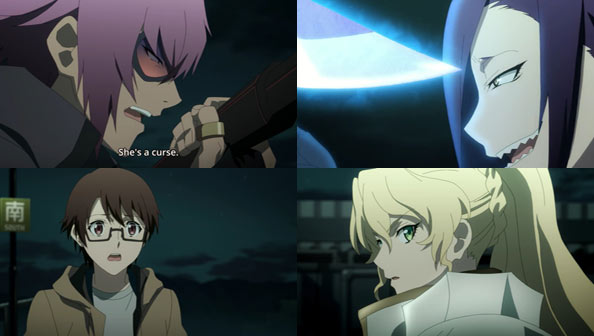 Souta calls Kikuchihara, but she and help may not arrive in time, so it’s up to him to try to stop Alice, and he actually gets her to at least pause by coming between her and a wounded Meteora.

He tells her that far from being entertained by the horrors in her world, he’s always felt sad about them, has rooted for her to win a better future for that world, and looks up to her as a lofty role model: a paragon of chivalry, courage and honor. I appreciated Souta finally putting his life on the line for his friend rather than staying on the sideline, even if he’s only armed with words.

Like so many creations now in Souta’s world, Alice doesn’t feel like the heroine Souta describes. She’s something different, and someone she believes doesn’t deserve his esteem. But however flawed and fallen a person she has become, she takes stock in the fact she’s still a knight, and will still avenge her friend’s death, come hell or high water.

While this is taking place, Mirokuji is fighting Chikujouin, who considers their sparring a form of flirtation, and gets him to agree to hand over his female samurai Hangaku (whom he calls a “curse”) if she beats him. 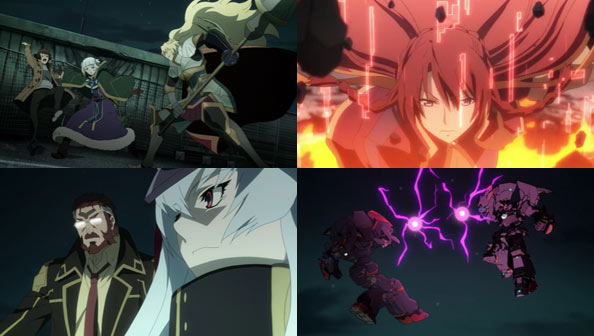 Once Alice has had enough even of the innocent Souta’s talk, she lunges at him, but this time it’s Meteora who gets in the way, taking the full force of her strike. It’s the only one Alice gets, however, before the timely arrival of Celestia. She’s to neutralize Alice, and Kanoya Rui is floating above it all in his Giga as a last-resort.

Just when we thought Rui was going to have to be the difference in this battle, Altair appears and attacks him with a clone of his own Giga, thus neutralizing him. Blitz takes his place by Altair’s side, and suddenly all the (living) players are on the field at once.

Altair also guides Alice’s weapon so it impales Celestia, delivering a seemingly mortal wound. It’s up to Matsubara to throw caution to the wind and quickly “revise” her character by having Marine post a new illustration of her, full of power and resplendent in flames.

The post catches fire itself, gaining thousands of likes and follows, thus imbuing Celestia with the power of that illustration, combined with his written words describing it. While it strains credulity for such a post to go viral so quickly, it’s neat to see the creator ability finally make a difference in a battle.

I also like how Matsubara considers it a matter of pride as a professional creative that his protagonist not lose to the creation of an amateur doujin artist (though it’s a dig at someone whose full story we’ve yet to see, so I’m still reserving judgment on her).

In the act of revising Celestia, Altair is somehow adversely affected, and seemingly shifts slightly out of sync with the world, the opposite of what she was going for. She beats a fast retreat, as the stars are “not yet in alignment” for her.

It would seem she’s been foiled, but only temporarily. Worse, once she dissipates, Celestia reverts to her pre-revised state, complete with acute blood loss and gaping chest wound; she’s rushed to the hospital where hopefully she’ll be okay.

And even worse still, We learn the end result Mirokuji’s battle with Chikujouin: she stole Hangaku from him, which surely drops him way down on the Creation Power Rankings. Still, everyone is still alive (for now) and the world still stands intact; that’s not nothing.