The Gist: Kawafuji is aware of Handa’s increasing paranoia in the wake of the amnesia plot and tries to introduce him to a new friend. Handa, being paranoid, dresses in a disguise for the meeting. However, at the end of their hang out day he comes to like the new person… but totally confuses issues be rescuing his new friend from bullies as Handa.

Then the school palm reader is stumped by how average Handa’s palm is. Also, that he will never marry nor have love, but will be surrounded by many children in the near future. She too takes this as an accidental compliment from Handa and strives to work harder.

The Verdict: while I greatly enjoyed the dog-rape segment for it’s rapier like subtlety, the third act was the most concise joke. There’s not much to say beyond that really… Handa-kun’s accidental nice guy hero formula is pretty straight forward and the cast around him follows such a predictable pattern, once you’ve seen one, you’ve seen it all.

Still worth a chuckle. Not a very clever chuckle but a chuckle all the same;

The age of males is long gone…

The Gist: This week’s unintentional conflict pits Handa against Tennouji Sawako-sama, the man-hating student council president. This is because Handa is popular, technically viceless, and looks like he is amassing a group of powerful students… all things that could challenge Sawako’s domination of the school, and males in general.

Sawako’s first plan is to seduce and control Handa with two of the school’s most predatory females but it’s thwarted in traditional Handa fashion: the girls overhear what seems like a genuine life lesson directed at them and leave, only for Handa to actually be talking to stray cats.

Sawako’s second plan is to capture Handa and force him to wear a skirt. This leads to a chase by de-masculinated student council vice-president Rikimaru, which culminates in Handa and Sawako falling down the stares. Handa appears to have protected her during the fall and, again following the show’s formula, wins Sawako’s heart without knowing what is going on at all.

In an unexpected twist, Handa loses his memory and becomes a creepy opportunist clown. There are many jokes about him trying to pick up girls but everyone things he’s just another fake because the real Handa would never cheapen himself like that. Eventually, Handa becomes depressed again, maybe or maybe not actually regaining his memory in the process… 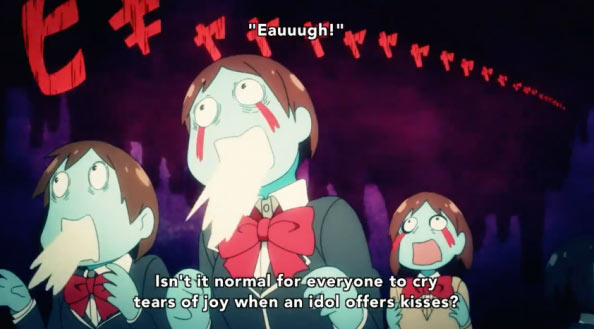 The Verdict: The opening act was pure formula but it was moderately entertaining. The jokes were well timed, the visuals were silly, and the accidental life lesson was amusing.

Unfortunately, the second act was not so good. It didn’t do anything with the amnesia tropes, it was short, and nothing really came of it except end everything was back to normal by the end.

To its credit, Handa-kun builds a remarkably lived in world where any character that has received a face and screen time continues to weave in and out of future episodes. Suicide-chan and the Predator Girls and not-Handa all make appearances here. But it’s a pretty average, lightly funny world to have dedicated so much effort to.

The Gist: This week Handa-kun continued to hit its stride with another trio of silly nonsensical situations. First we meet a Handa-kun cosplayer with terrible teeth, then students misunderstand Handa’s mom to be his girlfriend, and last Handa tries to make small talk because his parent teacher meeting doesn’t go well.

The Verdict: Handa-kun’s shortcomings as a show remain the same but so do its strengths in comedic timing. This leaves me with little to say beyond summarizing the episode, unfortunately. Fortunately, I was laughing most of the way! 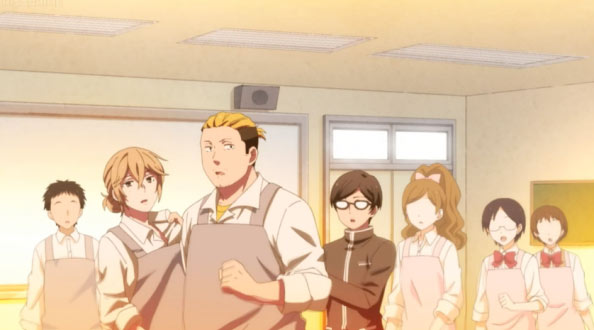 The Gist: This week concludes the character introductions with Tsutsui Akane-kun, Kondo Yokio and Kawafuji-kun. The three-part episode format makes each segment feel a little short but, honestly, that’s probably for the best.

Even though the core gag is the same in each segment (Handa-kun thinks the opposite of what everyone thinks he thinks), hopping from segment to segment keeps it from feeling over used. Played out or not, the question is, does Handa-kun have enough to like in the first place?

Tsutsui Akane-kun’s segment is the most interesting, structurally. See, Akane-Kun used to be a girly boy and he was literally tormented by the way Handa imagines being tormented. In a way, it is the way Handa is tormented: Girls thought Akane was stealing their boyfriends.

Unlike Handa, Akane broke and left school to become a shut in. Then he became a tough and redefined himself. When Handa/misunderstanding inevitably brings Akane back to school, the cycle continues with his own awkwardness leading Handa to think they are enemies.

tl;dr? It’s smarter than it is funny but it was also pretty funny.

Yokio’s section would be straight forward except we, as viewers, can draw a deeper understanding of Handa’s weird popularity from Yokio’s conclusions. Yokio see’s Handa’s decisions as bizarre, and he can see everyone is forcing themselves to think of these decisions in a positive light, but he can also see that the results are positive. Handa-Force stops fighting to pay attention to Handa’s kitchen fire and they all appreciate getting ‘treat’ of special custard at the end, even if it’s gross.

The results make the intention unimportant. In a way, because Handa is an eccentric artist, his actions are basically performances too, which makes them not out of place for him to do… in an academic sense.

Looking at it from another angle, Yokio knows Handa’s work is high concept and he gets that ‘an ordinary Joe can’t grasp his appeal’ but that’s not going to stop him from trying. 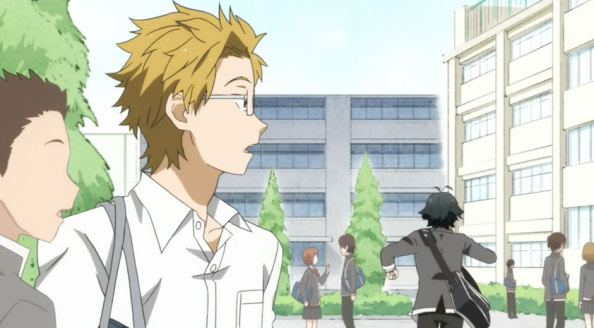 Kawafuji’s segment isn’t particularly interesting from a structural stand point and the jokes are over the top instead of funny. However, it shows us why Handa is so terrified of everyone, why Kawafuji is his only friend and why they would still be together in Barakamon.

Now that the comedic timing and dialog are tight, Handa-kun is enjoyable to watch. (even with the socially awkward cringe-factor) If some chuckles and tie-forward to the better show is enough to warrant keeping it on your schedule, there you have it. If not, summer’s packed with great shows. No big loss.

The Gist: Handa ‘defeats’ the two girls from last week, as well as ‘glasses’ Aizawa Junichi and ‘model’ Nikaido Reo who were introduced as members of Handa-force last week.

As with last week, Handa ‘defeats’ these opponents largely through his lack of understanding and, for the same reason, most people think highly of him. As you may have expected: all’s well that ends well: ‘muscles’ Juri-chan and Maiko-chan are back to being friends… and accept being romantic rivals.

What makes Handa-kun special: its protagonist is a hot mess of illogical responses that, against all odds, turn out in his favor. Take his misunderstanding of Maiko and his choice to write her a letter.

By making Muscles (Juri) fall for him, she became aware of the inequity of her relationship with Maiko. Then, after they both fail to win his affections and choose to try calligraphy, their relationship realigns, but with a new balance between them. A truer balance. That’s good narrative building!

What holds Handa-kun back from being great is that it only gives us one side of the coin seen in Barakamon. There, Handa played off of another character, and there was warmth from their back-and-forth.

Here, there is truly no warmth. Handa doesn’t like anyone here, not even a little. This isn’t ‘wrong’ but it is a little weird if you think about it: it’s about a talented jackass getting away with whatever and everyone assuming he’s a nice person.

The Verdict: Handa-kun has a solid formula and it deserves plenty of laughs. There’s real craft to how the narrative is constructed too. That said, it’s hard to imagine Handa-kun standing out without Barakamon.

And this is no Barakamon. 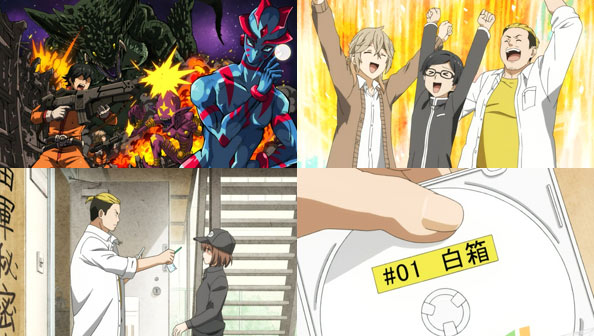 Barakamon was an awesome, often frenetic comedy with a ton of heart, so I was weary of a prequel taking place in high school. There was no need to worry: Handa-kun is an entirely different animal in the best way. It’s no match for Barakamon, but it has it’s own absurd energy and charm.

The scene plays with out own expectations and ignorance about what exactly this show is going to be about (besides Handa in high school), while taking a couple of good-hearted digs at the expectant audience-anime studio relationship.

When we finally get to Handa in high school, he’s an absolute mess, as expected. While everyone around him either loves, envies, or reveres him, Handa doesn’t have a clue, and gets the exact opposite vibes that are being thrown his way. Even the button-cute class idol wants to date him, but he assumes she’s trying to beat him up.

Handa’s talent also lets him get away with murder in class, as his thought processes often leak into public hearing, the math lesson be damned. He doesn’t bother to look or hear anything anyone does or says correctly. He’s hopeless.

That being said, Handa tries to hear Maiko out, but in the strangest way possible; writing a note for Maiko’s gruff, bizarrely proportioned friend Juri, in a scrawl elaborate and nigh-incomprehensible to a high schooler. Not exactly the best way to relay a clear message!

His note convinces Juri that he’s into her, and so when Handa arrives at the agreed upon spot behind the gym after school, both Juri and Maiko are there waiting for him. Naturally, he assumes the worst: some kind of challenged or fight is imminent, but you have to respect his “courage”…if only he had a friggin’ clue what was going on around him! Alas, his constantly churning mind obscures all.

We close on that spot behind the gym, and go back to the group of four friends who started the episode, just as frustrated as I am by the “To Be Continued.” But the kicker is when they mail Handa their creepily-drawn homemade anime, and before the OP is over,  he simply has to switch it off.

Well, that’s not what I’ll be doing with the real anime…it was a gas, and I’m excited to see what bizarreness it can bring to bear next time.