TG35 tables its fanservice and harem elements this week, instead focusing on the more serious matter of Kusanagi continuing his quest to make Ootori accept him as a captain and a comrade, a decision I felt made for a better episode than the first.

When Ootori affirms her unwillingness to allow being lumped in with the Small Fry Platoon, Suginami reveals her nickname of “calamity” in Inquisition, where she was a revenge-driven loose cannon – accusations she won’t deny.

Eager to make his unit better and not willing to sit back and let Ootori continue to fight alone, he keeps trying to convince her, but his efforts are interrupted by the summoning of a hero or “einhenjar” tasked with assaulting the academy. In confronting and battling that einhenjar, Kusanagi eventually backs into the very means to help shoulder Ootori’s burdens by contracting with a “relic eater”, Lapis Lazuli. 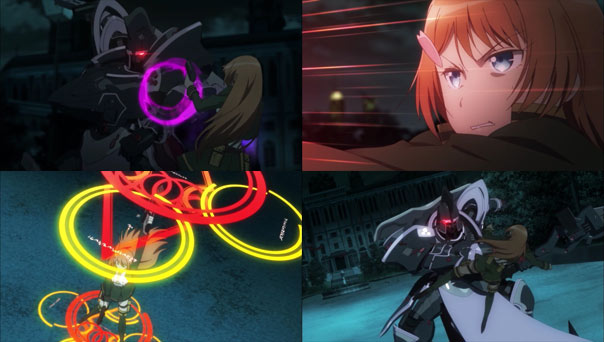 But first, Ootori runs off and tries to take on the einhenjar (Arthur Pendragon, armed with a railgun Excalibur) all by herself, questioning what good she is if she can’t handle such a “puny threat” on her own.

When conventional attacks fail, she summons her own relic hunter, Vlad, in the form of two pistols, but she only has a provisional contract with him, and Vlad’s need to take her blood to function effectively weakens her more.

Finally, the director de-summons Vlad, leaving Ootori defenseless against Pendragon. But that action reveals the director’s intention: to give Kusanagi the opportunity to contract with Lapis, a pairing he’s been looking forward to.

Kusanagi comes to Ootori’s aid, backed up by Saionji and Suginami, but his attacks also fail. At the same time, Ootori realizes it was Kusanagi she beat back in the past; they didn’t meet for the first time last week. I wonder if there’s anything else to that past connection.

Pendragon then does to Kusanagi what he did to Ootori, and he ends up bleeding out on the ground—until Lapis suddenly appears through the dust cloud (a nice visual), transports him to a different dimension, and takes him through the contracting ceremony, consisting of questions such as “would you abandon what is precious to you” (hell no) and “would you abandon your humanity” (sure) to achieve his goals.

I liked the prompt, no-nonsense introduction of Lapis, as well as her occasional moments of playfulness (bum-ba-da-bum!) amidst her usual ethereal stoicism. She also reminded me of Knight Rider a bit; a sentient piece of technology-as-companion. Also notable: no boob-grabbing or nudity silliness with Lapis, and her outfit, while cool-looking, is also pretty modest. Refreshing! 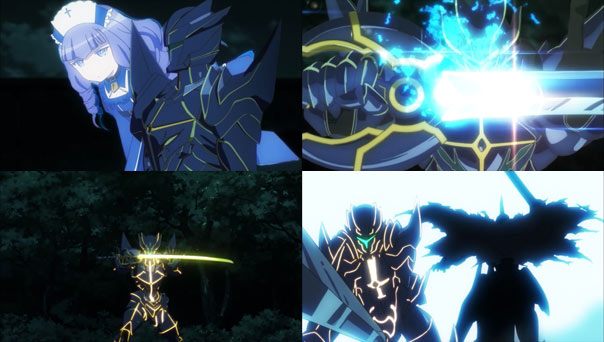 There’s the sense Kusanagi isn’t quite sure what’s going on, but Lapis helpfully informs him the contract is complete and she is now his. And what she is is an unbreakable sword and suit of armor which are just the two things someone with his sword skills needs to not only fight witches effectively, but also in order to convince Ootori he can be relied upon, despite his normally unreliable aura.

With Pendragon easily dispatched,  Kusanagi joins Ootori against a tree trunk, saying he won’t presume to lecture her about revenge, but earnestly asks her to at least let him share half of her burden, as her comrade and her friend.

Ootori, having been saved from certain death, is hardly in a position to protest further, and in any event, once Kusanagi passes out on her lap, she privately confesses to not really minding the feeling of having someone wanting to, and being allowed, to share her burden. If her fight with Pendragon taught her anything, it’s that she won’t get far alone.

As for the sixth main character, the witch Nikaidou Mari, she seems to be in reluctant cahoots with the murderous necromancer who summoned Pendragon, but passes out before Inquisition arrests her. I imagine she’s on a course that’ll eventually lead her to Kusanagi and the 35th.