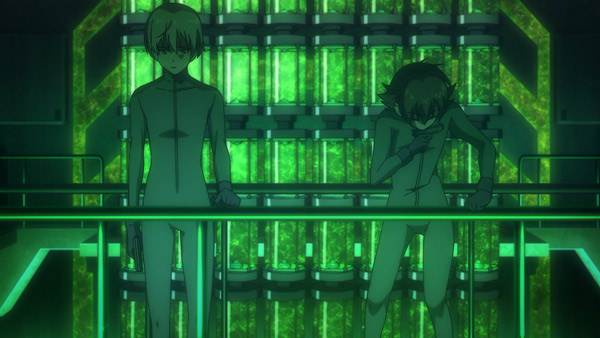 Haruto learns that anyone who pilots Valvrave will eventually end up an empty shell like Marie. The Dorssian Royalists ask New JIOR to destroy a covert Dorssian submarine, the Phantom, in exchange for supplies. Yamada and Akira are sent to search for Rukino, while L-elf and Haruto infiltrate the sub as the others stand by in the stolen transport hidden underwater. Meanwhile X-eins is summoned by Colonel Cain to the “Castle of No Return” in Grunau.

A concerned H-neun beats X there, and Cain hunts him down. In the bowels of the Phantom, L-elf and Haruto find a hundreds of unconscious people having Runes extracted. When L-elf threatens to make Satomi pilot Unit 1, Haruto pilots it instead, sets off a volcanic eruption, and mops up the Dorssian forces attacking the transport. X-eins arrives at the castle, where Cain laments he has to start “the ceremony” over again. 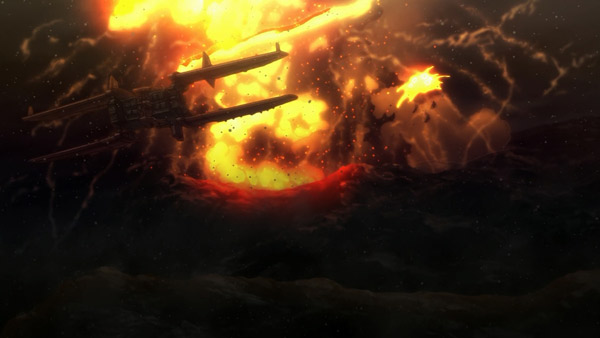 While they started out as monolithic, brutal Space Nazis—an opaque villain to root against, the Dorssians have become a lot more textured and nuanced, starting obviously with L-elf’s decision to revolt against his own people, but carried through with all of the military-political intrigue involving Cain, and the fact that he’s not really human, but some kind of godlike being who’s up to no good. And obviously conscious that it has a whole season to fill, the series is delving even deeper into the everyday lives, pasts, and motivations of L-elf’s former comrades, namely H-neun and X-eins.

Meanwhile Haruto and L-elf get some quality time together, and Haruto, with his post-Marie nightmares and the knowledge he’s being slowly killed by his mecha, appears to waver, and L-elf decides that maybe it would be best if more JIORans resign their humanity so the burden can be shared. This has the semi-intentional effect of rattling Haruto’s cage to the point where he jumps back into the cockpit and raises hell, vowing never to share his unit – or his curse – with anyone else. Which leads to him setting off a friggin’ volcano, which is such Valvrave-y thing to do.

Saki, Kyuuma and Aina find an unconscious Haruto and L-elf, but they’re cornered by A-drei, H-neun, X-eins and Q-vier. L-elf wakes up, shoots A-drei in the eye, helps Haruto’s friends escape, and goes with them. The Dorssians consider L-elf a deserter and take the Valvrave into custody. Haruto, who is in L-elf’s body, uses his special forces skills to retrieve his own body and the Valvrave.

Once back in his body, Haruto heads into space with Saki and a bound L-elf. Shouko calls Haruto to tell him she’s alive and trapped in a car under rubble. A-drei and Q-vier pursue and pummel the Valvrave whose overboost engages when it hits 666 heat capacity. Haruto cripples A-drei’s Ideal, and when an ARUS fleet arrives, Dorssia beats a retreat. Reunited with Shouko, Haruto still doesn’t confess.

This episode debunks a couple assumptions we made about last week. First, Shouko isn’t dead, so Haruto’s services as her furious avenger are no longer required. Frankly should have known she’d be back, considering she’s a main character. Second, Haruto, who also cheated death last week, isn’t a vampire per se. Rather, biting necks allows him to “borrow” the body of the bitee, and they’ll have no memory of what he does as them.

L-elf calls him a monster for stealing his body and making it appear that he’s betrayed Dorssia. Frankly, Elfie’s a monster too for participating in a slimy, unprovoked attack on the peaceful, if naive, JIOR. Perhaps more so, since all Haruto pushed was the “resign humanity” button. But that’s enough for him to wave off his confession to Shouko. He takes L-elf’s monster label to heart, and probably fears hurting her and the others with his new abilities. He’s probably not wrong.