Alessand goes through a lot of emotions as he stalks and kills Mugaro. There’s some excitement and satisfaction he’s proven his “worth” to the Onyx Soldiers, but also a crushing guilt and self-hatred. He is truly a fallen knight. He failed the test.

He also fails to get out undetected; Favaro spots him fleeing the scene of the crime, but rather than give chase, he takes Mugaro to Rita, who tries despretely in vain to save his life as everyone around watches, including Nina, who had been previously so distracted by her own woes. 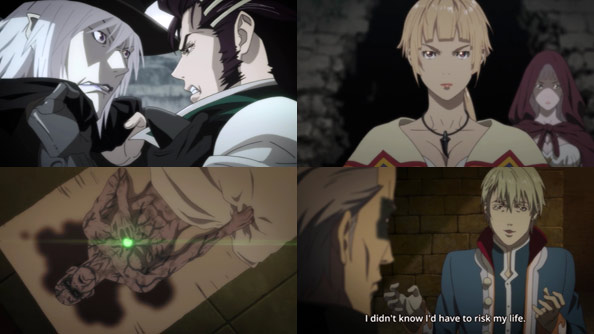 It wouldn’t be much of a drama if Rita could’ve so easily saved Mugaro, so he dies, and the group is scattered and lost as a result. After grieving, Jeanne returns to the Land of the Gods with Sofiel and purpose.

Azazel—at times a father, brother, and friend to Mugaro—also storms off, after his hunch about one of Kaisar’s subordinates being responsible is proven true by Favaro.

And naturally, Alessand doesn’t get what he bargained for. He has the blood of a holy child on his hands, but when the Onyx commander shows what being an Onyx soldier really means—becoming host to a life-sucking stone that leads to an agonizing half-life—he immediately balks. I must say, Alessand has gone from harmless buffoon to loathsome wretch in shockingly short order.

Up in the LotG, Gabriel rejoices at the return of Sofiel and Jeanne, but also pained by the news of the loss of El. Never mind; the time for mourning is over, as far as Jeanne is concerned. Sofiel transforms her into a holy warrior, and they prepare to return to the surface world in force to exact their revenge.

Azazel has less luck, at least initially, with his superior Lucifer, and Azzy has to take a book to the face, but he eventually convinces him that Jeanne is indeed moving against Charioce, and there will never be a better time to strike. Whether any kind of coordination is in the cards, we’ll have to see. 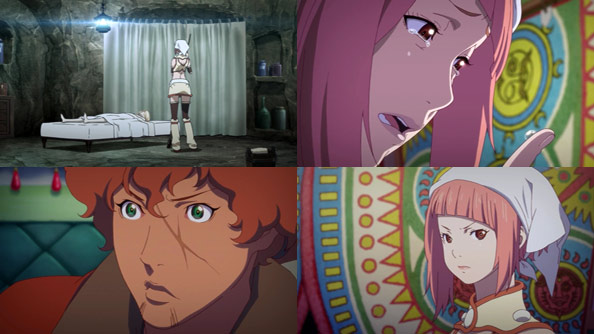 And then we have Nina. Ever since Mugaro’s death, her demeanor has been muted, and she admits to feeling numb; like Titus Andronicus, she hath not another tear to shed. She cleans and cleans until, while cleaning Bacchus’ wagon, she finds Mugaro’s dress, and the tears begin to pour, as she recalls raw anguish similar to when her dear father died.

After her good long cathartic cry, Favaro visits her in the wagon, but has no certain answers to her questions. When Nina gets up and shows her face, Favaro is surprised to see it’s no longer soaked with tears; instead, she wears a face of stern determination; of focus.

Like Azazel, like Jeanne, she’s done crying. And if Charioce will continue to hurt and kill her friends, she’ll take it upon herself to stop him, no matter what it takes. Not long thereafter, Jeanne speaks to the people from on high: rise up against the mad king who killed her only child and intends to kill many more.