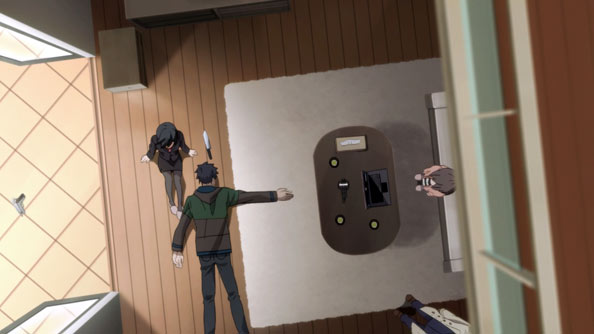 What had been a calm encounter with Inami Nahoshi takes a turn when Hondomachi outs her as the Gravedigger mastermind. Nahoshi is calm because her accomplice Kazuta is in the house with all the kitchen knives.

A dust-up ensures, with Matsuoka receiving a flesh wound to the shoulder and Hondomachi stabbing Kazuta to death, much to Nahoshi’s uncharacteristic dismay. These two detectives are just powerful electromagnets for trouble.

Demonstrating that the detectives at the Wellside are always working, five of them spend their time a police officer’s funeral discussing the Walker case. Why does he keep showing up in the id wells of serial killers, and in the same whimsical form? The name of the inventor of the Mizuhanome, Shirakoma Nishio, comes up, which is sure to be important later on.

While this case are already complicated enough, one of them brings up the possibility one of them is a mole working from within. Considering we only have cursory familiarity with these five detectives, the eventual reveal of one of them as Walker wouldn’t be that narratively satisfying, at least not yet. 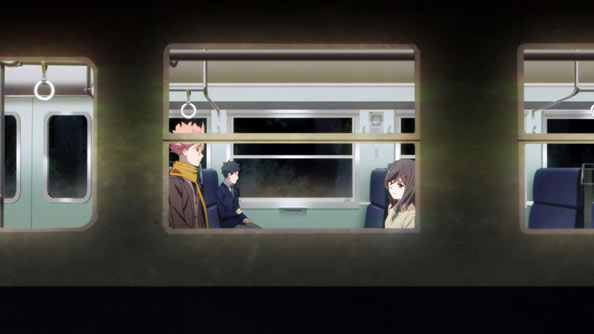 Using the cognition particles from Kazuta’s urge to kill (which manifested in a dying kiss to Hondomachi), Narihisago is injected from the flying house to a train. On it, Kaeru is (obviously) dead via stabbing. When he follows the very obvious bloody footprints, he discovers the train is a closed loop, ending right back where it begins.

The Wellsiders determine this is the very train Nahoshi’s mother jumped in front of…while Nahoshi was on it. A high school-aged Nahoshi is here to, with a younger Kazuta sitting on the opposite side of the aisle. There was once a time when Nahoshi abhored seeing dead things or people; her mother’s suicide flipped that sensibility.

IRL, Nahoshi reveals all the locations of the barrels containing her victims, but on the id train she didn’t kill Kaeru; Kaeru killed herself. When Narihisago comes to this conclusion, he weeps in her lap. He grows weary of coming upon her corpse over and over again. He wants to save her, but like the train, he’s going in circles. One wonders how long he can keep up the Brilliant Detective act with his sanity intact (such as it is already).

That brings us to Hondomachi, the other protagonist. Matsuoka recommends her to be a second Brilliant Detective utilizing the Mizuhanome. Hondomachi is flattered, but Matsuoka considers it a practical decision, in part to protect him and their colleagues. Hondomachi has killed more than once—by attempting to kill herself and then killing Kazuta. Matsuoka laments he couldn’t keep her out of this business, but she’s too suited for it, and there’s no turning back.

The Wellsiders make a connection between the surveillance devices found in the Perforator’s house match those used in the case involving the “Challenger”, AKA Katsuyama Denshin, the man who killed Narihisago’s daughter. With every subsequent case, ID:INVADED adds another piece to the larger puzzle of John Walker and the root of Narihisago’s fall, just as his possible successor begins her ascent.

Hondomachi may not be a superhero who got her deductive powers from a hole drilled in her head, but that bizarre injury offered her unique perspective into someone like Kazuta Haruka, whom she meets in the street and who kisses her before fleeing.

For her, everything suddenly points to Haruka, a former victim of the Perforator, being the Gravedigger. Their equipment hasn’t been able to detect his killing intent because when he has a sudden urge to kill he reacts with a gesture of love instead—a kiss—and would therefore kill those whom he loves.

Sure enough, cognition particles are found an an Id Well is opened, into which Sakaido is injected. He enters the well in the middle of the sky falling at great speed, but manages to land on a floating island containing a house later identified as belonging to Kazuta.

Once Sakaido’s memory is activated by the sight of a murdere Kaeru, he looks under her carefully-spread pool of blood to find a girl hiding who has shifting features and voices—a composite of the Gravedigger’s victims.

Sakaido also finds shards of a photo also found when Kazuta was a victim, and Hondomachi and Matsuoka are dispatched to meet with those in the picture one by one while Nishimura and a SWAT team head to the site of Kazuta’s house, now a soy sauce brewery.

The composite girl said her boyfriend went out of the house to fight the “monster”, and when Sakaido heads out he quickly learns that monster is John Walker, who kills the “boyfriend”, dodges Sakaido’s attacks, and flies off with that trademark tip of his hat.

As Hondomachi diligently interviews the “cutest” of the people in the photo, Inami Nahoshi, Nishimura and his team discover vats that could contain victims, but are blown up in the brewery—it was all a trap. Meanwhile Hondomachi is unafraid to pry as far as she can with questions relating to Inami’s love life. Inami also seems all too happy to clean her head wound when it suddenly starts bleeding.

By the time Matsuoka gets word of the trap, Hondomachi has Inami cornered, revealing her to be a sadist using Kazuta’s scrambled romantic and murderous urges to her advantage by having him commit the murders for her. Hondomachi moves to arrest Inami and demands to know where Kazuta is; meanwhile, he’s lurking nearby with a knife.

It’s interesting to see how both Hondomachi and Sakaido have been elevated in their deductive ability by their respective marks (the former, her head wound; the latter, his crime) In the Id Well, Sakaido is the Brilliant Detective, as well as a Mission Impossible-style action hero.  But in the real world, the ace detective is without doubt the recently wounded but no-less-relentless Hondomachi.

Whether he feels bad about trying to sacrifice Stella or not (I would guess not), Elias can’t accept Chise leaving him. He wants her back, and wanders aimlessly in search of her. When he kills part of the forest he’s in, Spriggan springs into action and takes him down.

Titania and Oberon show up, willing not just to help him find Chise, but to invite them both to the land of the faeries (always with the ulterior motives). Elias declines that particular offer, but Titania still helps him find Chise.

Titania’s powers reach far and wide, and practically everyone Chise has encountered and/or befriended on her various adventures notices those powers. As for Chise herself, she now finds herself watching a young Joseph’s memories.

Joseph was the son of a witch and gravedigger and much hated by the villagefolk for those qualities. But when he finds Cartaphilus half-buried in the woods, he takes him home out of pity, and resolves to heal his extensive injuries using the skills he no doubt learned from his mom. 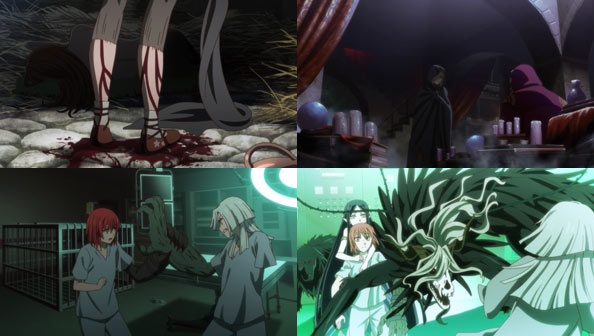 Only Cartaphilus never gets better, no matter what treatments Joe tries. He doesn’t get worse either, which means the conditions that would allow Joseph to leave the town he hates so much never materialize. Joe snaps, and decides that drastic measures are the only answer: he “becomes one” with Cartaphilus.

The newly merged individual travels (presumably) to London, collecting body parts from innocents to replace the ones that no longer work, and learns from a mage that the ancient curse he has cannot be lifted.

With that, Chise comes out of it, and Cartaphilus almost immediately tries to rip her arm off, hoping it’s the final piece to the puzzle of ending his suffering. It doesn’t look good for Chise until Titania, Elias, Spriggan, and Ruth arrive in the nick of time to save her. 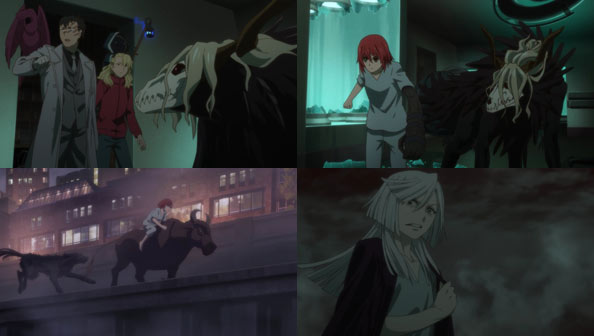 Renfred and Alice arrive as Cartaphilus unleashes his grotesque menagerie, and a big battle occurs in the small space. Still, Chise is laser-focused on Cartaphilus, and when he creates a portal to escape, she follows him, but not before shooting an angry look at Elias.

Elias and Ruth follow her, and they end up in a foggy London alley with Chise, just as a fleeing Cartaphilus bumps into Mariel, who just happens to be in that very same alley. Mariel, hoping to help in some way, transforms herself into a bull for Chise to ride.

They find Cartaphilus sitting on the same fountain we’ve always seen during the second-cour credits. Can Chise end his suffering, while also saving herself?