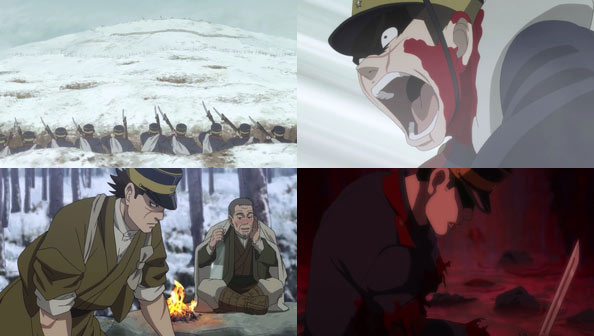 It’s 1904: The Russo-Japanese War, three years before my older grandfather was even born. Sugimoto Saichi is in the trenches, and earns the nickname “The Immortal Sugimoto” for…well, refusing to die. Bullets always miss or glance off him. He’s never in the path of a cannon or mortar.

His vitals always manage to avoid enemy blades. Even when he rushes the Russians head-on yelling “JUST TRY AND KILL ME!”, they fail to kill him. One might say this particular quality of his is a blessing, but all it means is he gets to live on as everyone around him dies.

Among the dead who leave him behind is his old friend and war buddy, who is survived by a wife with failing vision and a child. Sugimoto nearly killed a superior, so he’s cashiered out of the service, and must try to scrape together a living in a place where the gold rush has long since run dry. 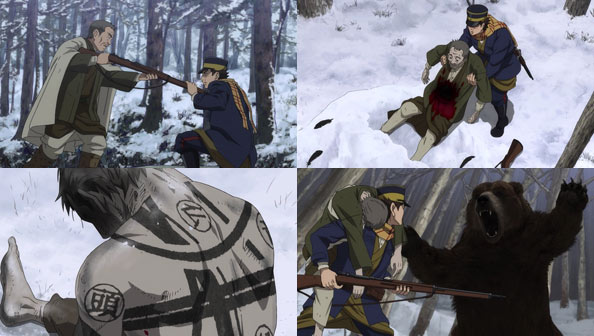 While panning in a river for the dregs of that rush, an old drunk keeps Sugimoto company, telling him what initially sounds like a tall tale about a man who stole a mass treasure of gold from the native Ainu and killed a bunch of them. He was imprisoned, but tattooed pieces of a map to the treasure on other prisoners who then escaped, promising them a half share.

When the drunk realizes he’s said too much and tries to kill Sugimoto, Sugimoto clobbers him and forces him to flee…but now Sugimoto is more certain the man wasn’t just telling tall tales. That’s confirmed when he later finds the man’s corpse. He was killed and buried by a bear, but his body bears the map tattoos. 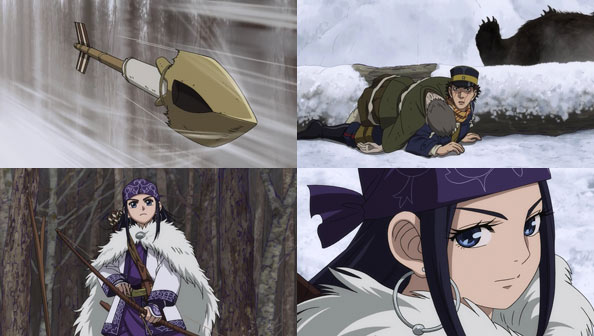 Of course, it’s not that simple: a bear returns, apparently to reclaim its meal, and Sugimoto isn’t ready…but thankfully someone is. Up until now things like timing, physics, and coincidence had served The Immortal Sugimoto, but here and now he finds himself face-to-face with the personification of his luck and salvation: a petite Ainu woman who introduces herself as Asirpa.

Out there in the wilderness, I’d much rather have Asirpa by my side than Sugimoto, especially considering its him, not me, who’d more likely escape death once again. She not only determines that the bear they just killed wasn’t the one who killed the prisoner, but that the man who tattooed him never intended to share the treasure. That man also killed Asirpa’s father to get the gold in the first place. 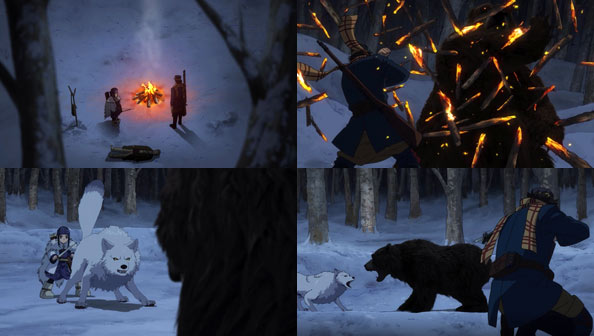 Because this is just barely the 20th century, and Sugimoto isn’t wealthy enough to own a camera (and the cameraphone is a century away), the only way to preserve the parts of the map they now have is to skin the man. (I suppose he could make a drawing, but lacks the materials) But that will take time, and night waits for no one, not even the Immortal Sugimoto.

Instead, he and Asirpa keep a fire going and use the corspe to lure the megabear to them. He gets the jump on Sugimoto and extinguishes the flame, accelerating their plans somewhat. Then Asirpa’s guardian angel, a white wolf that may well contain the soul of her late father, joins the fray, protecting her and giving Sugimoto an opportunity to shoot the bear. 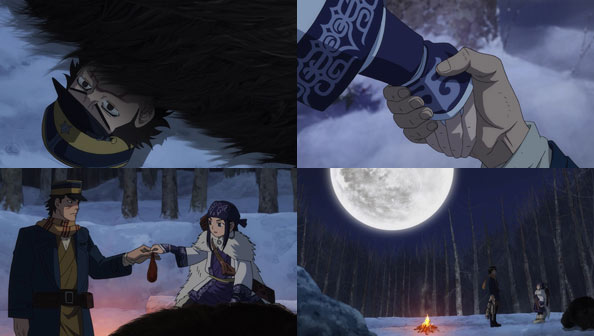 The bear doesn’t go down that easily, and requires a well-placed blade to its heart to kill, but Sugimoto survives, and impresses Asirpa with his warrior instincts. That being said, she can have no part of the bear she helped kill, as it ate human flesh and was sent to a special form of hell. She, by the way, doesn’t want to shed human blood either.

After Sugimoto skins the map from the map (gross), he vows to be the one to do the “dirty work” while she’ll continue to provide the wisdom and support she has so far, and without which he’d have already been killed by now. Together they’ll find the other pieces of the map (even the skin he has is a patchwork of disconnected map fragments), she can get revenge for her father, and he can get gold for his friends’ family.

Sounds like a good win-win deal, and a strong finish to a hell of a strong and intriguing story set deep in a place utterly inhospitable to humans who have lost touch with nature, and starring two people who are immensely badass in very different yet equally fascinating ways. Hat tip to tombeet for the recommendation! 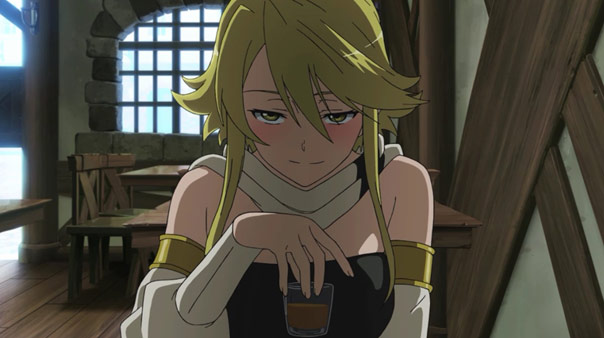 HMMM…Well, now, that was certainly something. A quick check of MAL indicates this puppy currently stands at 8.27, which is high. Almost as high as Hannah’s top pick, Zankyou no Terror, and certainly higher than anything else I’ve watched so far this Summer. MAL ratings can be as dubious as seemingly kind aristocrats in the Imperial Capital, but in this case, they did not mislead, and now I have some catching up to do. 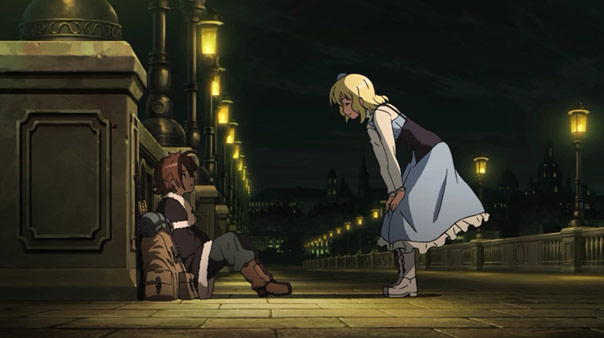 Don’t get me wrong: there’s a lot here I’ve seen before. In fact, the lands of AGK could easily be a continent over from the lands of Hitsugi no Chaika, which I must admit I’m kind of missing right now, so this really scratches that itch. Like Chaika, it starts strong, as the protagonist Tatsumi—also seemingly plucked from an RPG—brings down a monster that’s actually pretty cool and fearsome-looking (the horse isn’t quite drawn right, but I’m splitting horse hairs). 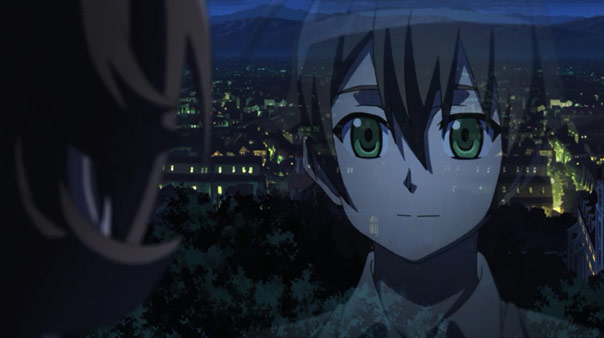 Tatsumi comes from a remote mountain village, seeking fame and fortune in the capital with which to help said village, presently suffering from overtaxation. His first interaction with a (busty) citizen of the capital results in him losing all his money, but the kindly young Lady Aria spots him sleeping outside and invites him to her palace, where he is offered every hospitality by Aria and her equally lovely-seeming family. 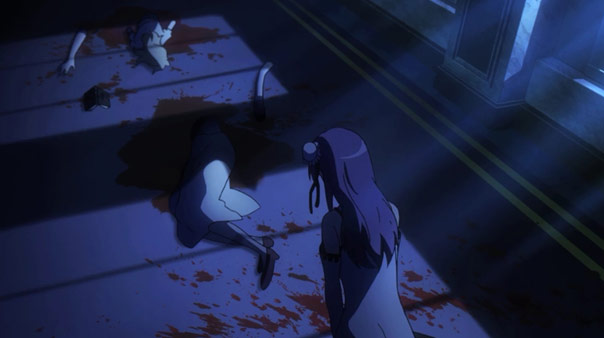 Considering all the foreboding things we’ve heard about the capital “rotting with corruption” and “demons in human form”, they do seem to clash with those descriptions. When Aria’s mother is walking down the hall and is suddenly sliced into several pieces by an assassin in a stylish flash of blood, I honestly felt pretty bad for her. Man, was I a bloody idiot! 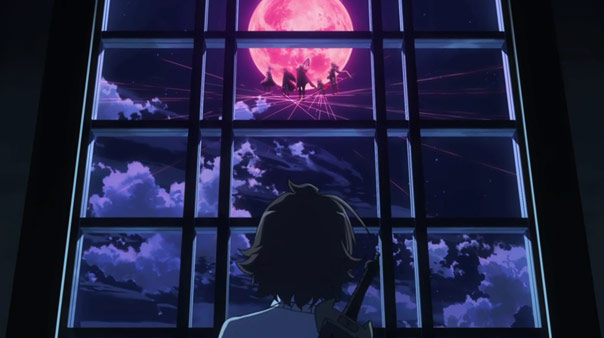 The show made an interesting, and I thought clever, choice to portray the week’s villains as the good guys, while Night Raid, the group of assassins who attack them, look like the villains. We see things as Tatsumi sees things, and he’s ready to die to protect his benefactor Aria…until the contents of her family’s creepy-looking storeroom are revealed to him, which…Oh Dear GOD. 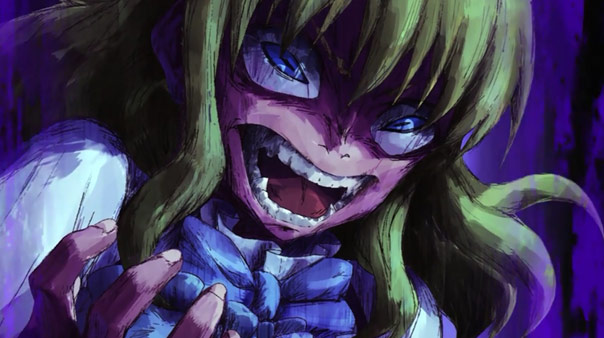 Turns out they’re a ghastly family sadists disguised as Good Samaritans, luring in country folk new to the city and having their way with them. Among their victims are Tatsumi’s own childhood friends and companions, Sayo and Ieyasu. When the jig is up, Aria merely lets off a vicious rant defending her actions, but before the members of Night Raid can kill her, Tatsumi does it for them, without a moment of hesitation. 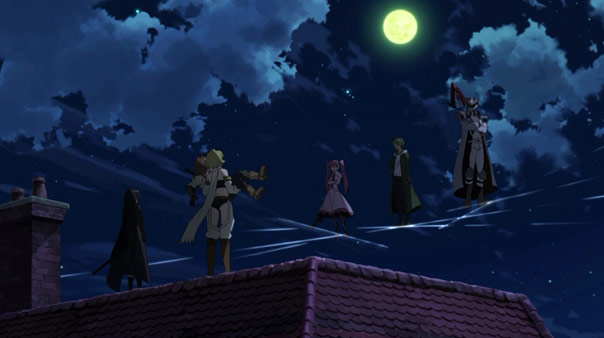 Leone, the busty woman who swindled him, is a member of Night Raid, and the one with by far the most screen time and lines among them. Recognizing Tatsumi’s courage, skill, and above all luck (every RPG hero needs it!), she recruits him into their group on the spot. “What’s up with this turn of events?!” exclaims Tatsumi, a babe in Leone’s arms as she soars through the night. I don’t know, m’boy, but it’s a lot of fun so far!