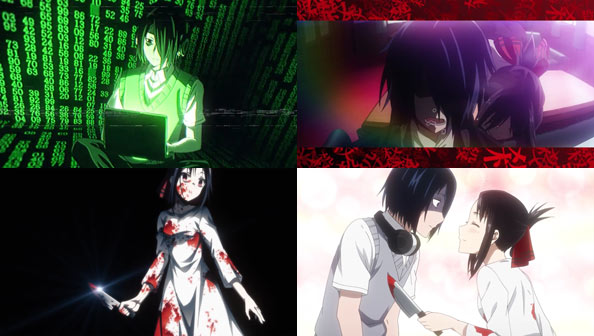 This week we finally meet StuCo treasurer Ishigami Yuu, the sheltered, skittish yin to Chika’s gregarious, ebullient yang. Miyuki appointed him treasurer due to his considerable skills in financial management, and while he’s not often around, the work he does mostly at home keeps the StuCo solvent. So Miyuki is determined to discourage Yuu from suddenly resigning.

Yuu wants to resign because he has the complete wrong idea about Kaguya, mistaking her intense, imperious gaze for murderous intent she not only intends to act on, but has acted on before, and more than once. Matters aren’t helped when Kaguya scares the shit out of both guys by entering the office with a bloody knife and bloodstained tunic.

Turns out she’s just costume-fitting for the drama club, but she reminds Yuu—who doesn’t know better than to take her threats of pain and death 100% seriously—never to blab to Miyuki about hiding cafe coupons under the desk, hoping to lure Miyuki into a date. She also warns him not to quit the StuCo, so Yuu’s fear of being killed for resigning outweighs his fear of staying. 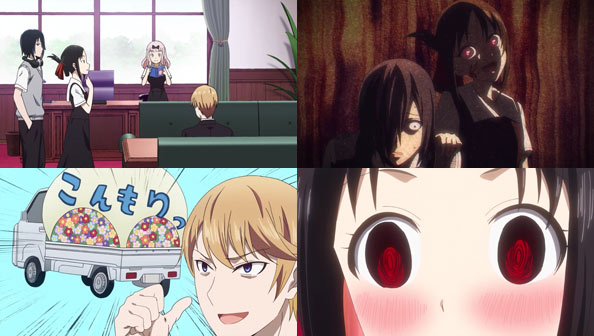 So the first segment is a bit ol’ loss for Yuu. In the second, Chika breaks out a book of psychological tests that determine who you like; a book Kaguya knew Chika would eventually acquire and read the whole thing in advance so that her answers wouldn’t subconsciously indicate her love for the President.

Miyuki also suspects Chika’s questions are a trap, and so gives a dishonest answer that indicates he’s a siscon, while Yuu’s answer indicates Stockholm Syndrome. Chika’s final question throws both Kaguya and Miyuki off, since it’s not from the book but online, and they both inadvertently answer honestly.

In this instance, Miyuki is determined to be the loser since his answer to gather an entire field of flowers indicates he harbors a similarly ridiculous amount of love for Kaguya, compared to Kaguya’s more modest bouquet. That being said, I don’t put a lot of stock in Chika’s unscientific tests, skewed as they are toward romantic intention. 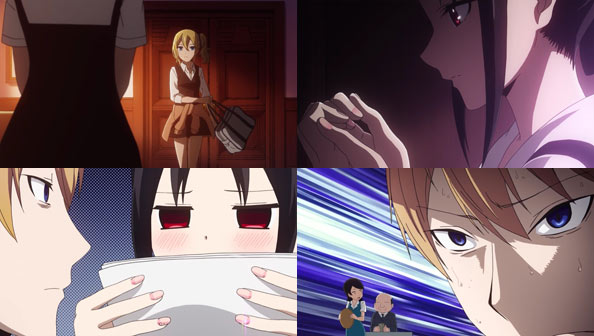 In the final segment, Kaguya’s maid Hayasaka (who is apparently also a student there but has a gal-like persona with her friends) wants to give Miss “Swans don’t need ornamentation” Kaguya-sama some glam, starting with some gel nail polish with tasteful rhinestones on the ring fingers. Kaguya wants Miyuki to notice them and compliment her, but is also worried he’ll think they’re frivolous or silly.

Turns out he seemingly doesn’t notice the nails at all, even when she waves them inches from his eyes. The truth is, he immediately notices she’s being fashionable, but is worried about whether to respond, and how, assuming it’s another trap that will expose his feelings for her or simply to make him look foolish. He knows an improper compliment can be sexual harassment. 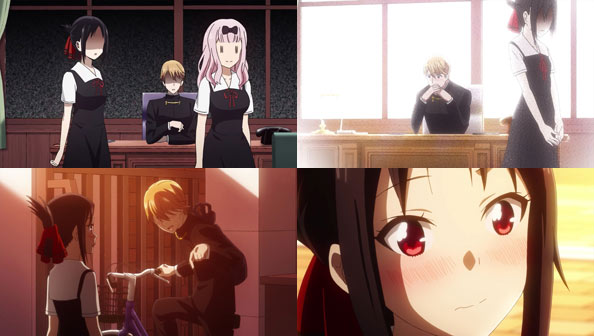 Yuu doesn’t make giving anyone compliments a particularly good idea when he correctly guesses that Chika has changed hair conditioners based on the smell, an observation Chika comes right out and calls “creepy”, leading Yuu to slink away wishing for death to come.

Once the day passes and Kaguya hears nothing from Miyuki, she starts to head home, on the verge of tears. But Miyuki, finally deciding what to do, races to her side in his bike, mentioning the nails, but coming just short of calling them “cute” (he only gets “cu-cu-cu” before chickening out and racing off).

Kaguya is frustrated he didn’t finish his thought, but the mere fact he noticed her nails after all, and was so bashful about it, makes her happy beyond belief, not to mention the winner of the segment.