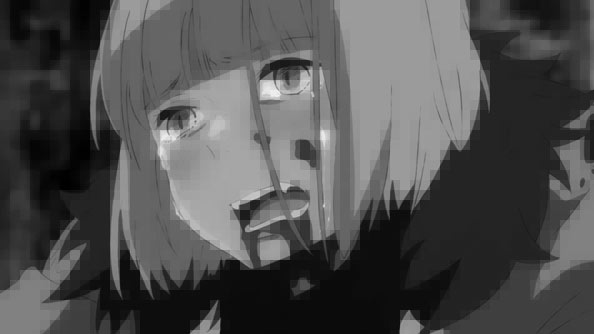 It is with a not-particularly-heavy heart that I say adieu to Children of the Whales, a show that just hasn’t been doing if for me the last couple of weeks. Its appalling lack of focus and momentum, the blandness of its many characters, and its thoroughly incoherent mythos (glowing hands, anyone?) all conspired to sap away any interest I might have initially harbored. To sit and watch the show try to flesh out and humanize the magenta-haired sadistic murderer who’d been nothing but a detestable jerk this whole time…yeah,  I’m out. 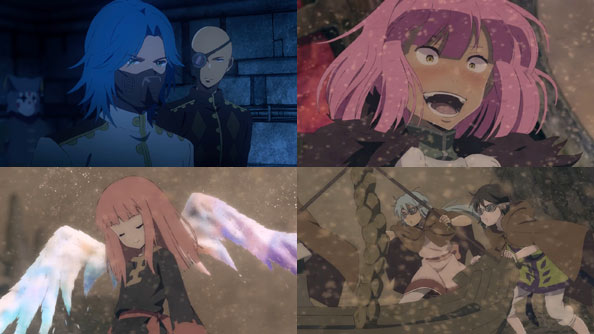 I asked for the battle to finally begin, and I got what I wanted…sort of? As intimidating as the looming Skylos appears out of the sandstorm and as meaty the score sounds, the battle largely lacks punch. Neri’s song is nice, I just wish more were going on while she sang it. As for the return of Mr. Pinkhair, lets just say I wish he’d stayed out of this; he’s a thoroughly uninteresting, annoying “crazy killer warrior.” 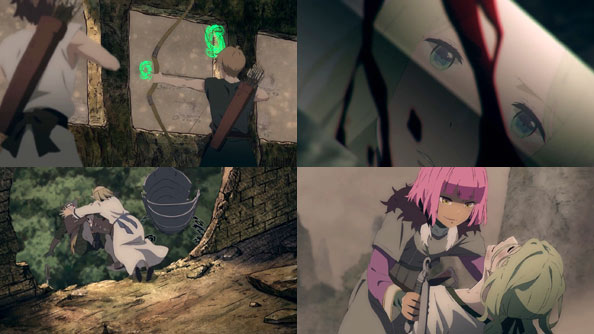 I am somewhat relieved this battle isn’t as large or lopsided a slaughter as the first; the Thymia-armed defenders, many of them kids, get their licks in before, say, one fighter lets her guard down and gets stabbed by Pinky.

The Elder who wanted to sink the whale also gets an excellent death, getting cut right down the middle of his face but using his momentum to send the two attackers plummeting to their deaths with him, saving several children.

Suou finds the elder, but before he can say goodbye properly, Pinky is there to torment him. Pinky is everywhere! How does he cover ground so quickly? At any rate, the Kamiya Hiroshi-voiced Shuan is poised to rescue Suou by giving Pinky a good fight. Not this week, though.

The raid on Skylos goes all too predictably well at first, until half of the force walks straight into a just-as-predictable trap right when they thought they were nearing the finish line. They all get slaughtered, though Lykos hung back, sensing said trap, while Ginshu guards the door with a wounded Nibi.

It would seem Falaina’s raiders were allowed to have their fun; now the hammer of Skylos is poised to come down on them, and hard. The commander was quite clear that all should be annihilated, even Lykos, despite her brother’s status.

Chakuro—I haven’t mentioned him yet, have I?—really doesn’t want to fight or kill, but did a decent job with his defensive magic. It’s clear Team Falaina is going to need more of it if what’s left of them are going to survive this thing.

The people—specifically the youth—of Falaina prepare for battle. After a certain age even the Marked can’t use Thymia, so they’ll be depending on children to fight, many of them quite small, and like everyone else, tought their entire lives not to use their power to hurt people.

They must unlearn all that pacifist conditioning and learn to kill, which is what their enemies will be experts at right out of the gate. A seldom-seen elder makes sure Suou understands what leadership is: he’ll be sending children to kill and die. Suou seems to. I mean, what’s the alternative; just sit around and wait to be killed?

One Falainan who’s never had trouble hurting people with his Thymia is Ouni, and he mentally prepares for the task ahead with his old friend Nibi, who welcomed him into his gang when they were kids when Ouni showed him that things like the Bowels weren’t really that scary.

There are scary times ahead, but it certainly seems that Nibi will be by Ouni’s side for them. Whether that spells the end for him when they infiltrate Skylos and try to kill its Nous…this isn’t the episode about that fight, but the final build-up to it. And at that, it works generally well.

As one of the people going on the infiltration mission, Chakuro will be doing more than simply witnessing events, he’ll be a direct participant in them; forced to use his infamous “destroyer” powers for actual destroying; maybe of the Nous, maybe of fellow humans, maybe both. It’s uncharted territory.

Fortunately, Lykos will be by his side, and while her gradual falling for Chakuro was both inevitable and predictable, it sure beats her having no emotions at all, even if, as she says, “feelings get in the way.” It’s true! But without feelings, would life really be worth living? I mean, what are we doin’ here, trying to win a stoicism contest, or LIVING?!

While preparing for the battle that may decide the fate of many a person, as well as that of the entire Mud Whale, the show remains content to keep us in the dark about Neri and her apparent twin, Ema, or what is up with her angel wings of light.

Suffice it to say, she’ll play a more satisfying role educating Chakuro on the secrets of the Mud Whale perhaps nobody knows besides the elders; and some stuff that even they might not know. But for Ema to start spilling the beans, Chakuro has to come out of this in one piece.

The villagers throw sand at each other in a tradition called the “sand returning” which kicks up those who have been lost into the air. In a touching scene Lykos witnesses Chakuro doing this for the late, dearly departed Sami.

After that calm comes the storm—a sandstorm, of course! Skylos can be heard before its red lights can be seen, but the great battleship doesn’t fully emerge quite yet; we get the credits. That means next week will be the battle – no more procrastinating! 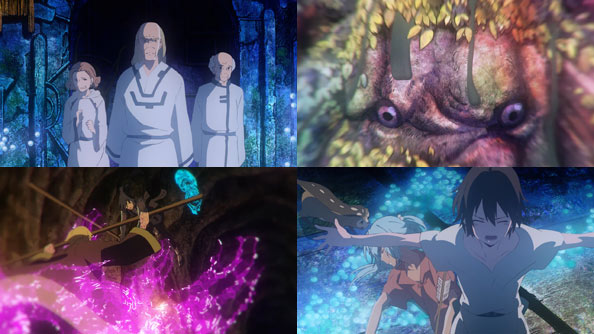 This week Chakuro and his friends locate the nous at the core of Falaina that apparently every sand ship has, are interrupted by three elders who bring archers to kill the nous, thus sinking the Mud Whale, but Chakuro manages to convince them not to, though they do manage to shoot Lykos in the leg.

After that, Suou is freed and Taisha’s aides gather to his side, he meets with Lykos, who tells everyone about the eight ships the empire has and how there could be other countries out there, and Suou gives a speech to the rest of the Whale’s population that they’re going to fight and defend until they can find allies. 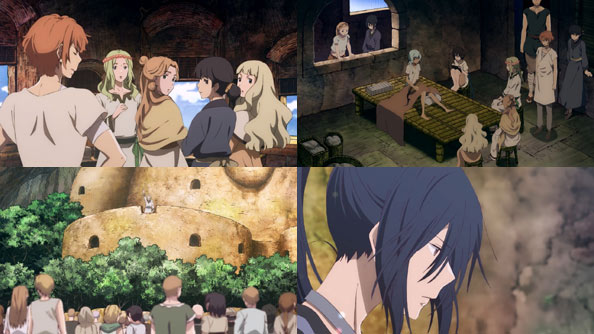 That’s a good amount of material in one episode…so why the heck did it feel to me like virtually nothing happened? I suspect it’s at least in part due to the overall presentation, which has felt lacking in urgency and peril since the surprise attack that ended episode two.

There’s also the fact that the Mud Whale feels like such a small and static setting whose leadership seems to change on a dime with little to no repercussions. The rest of the population is treated like one united faceless entity that cheers at the prospect of Ouni joining the defense force.

Perhaps most troubling—and contributory to my waning interest in this show—is the protagonist Chakuro, whose defining character trait is a guy who says a lot—both to others and through narration—but does very little, while Lykos’ is simply “girl who developed emotions” and little else.

As a result, it feels like I’m watching a set of thin and fairly generic characters caught up in a world that’s groaning under the weight of its convoluted (and at times, random-feeling) mythology.

Right now, that’s just not grabbing and holding my attention as much as the other Fall shows I’m watching. Maybe next week, when the defense of the whale begins in earnest, I’ll be able to muster more enthusiasm.

Suou is brought before the council of elders, named the new Chief of the Mud Whale, and given his first and last orders: to prepare the people to “return to the sea of sand” from whence they came; in other words, they want the entire remaining population to commit suicide en masse.

Wait, why are these clowns in charge again? Even Suou can’t accept that fate, and while trying to talk to the eldest elder of them all (who seems senile but seems to speak the truth nonetheless), gets knocked out by the captain of the guard and thrown into the Bowels.

Meanwhile, Chakuro is carving words into a cliff face when approached by Ginshu, who seems to be moving quickly after Sami’s demise, offering to help “Cha-kki” learn to use his Thymia better for the next defense of the Whale, obviously unaware of the elders’ decision. 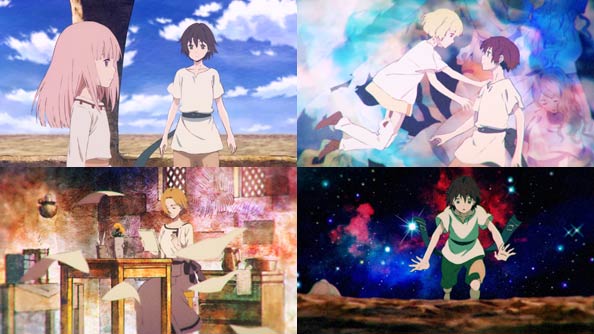 While gazing out into the sea, Nelli comes to Chakuro, and transports him into a series of visions involving those who have passed away, including Sami and Taisha, both of whom make clear that it’s not time for Chakuro to give up hope and join them; nor is it time for the Mud Whale to vanish.

It’s heartbreaking to see Sami anew, especially as she says she wanted to be Chakuro’s wife. She was never able to say this while alive, and so Chakuro never got to return her feelings.

These visions fly in the face of the elders’ wishes, but they—with the exception of one of them to whom the others no longer listen—have lost hope, and want only to give their people honorable deaths rather than let them be needlessly slaughtered. 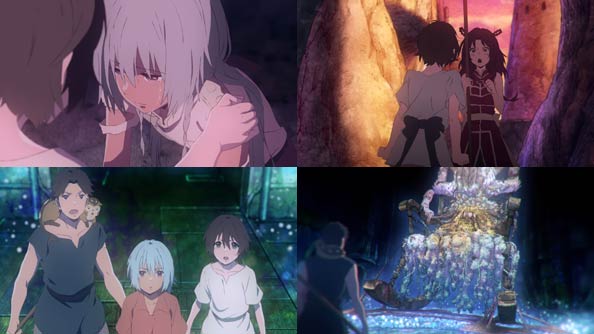 Newly invigorated by the visions from Nelli (who seemed oddly possessed by someone else afterwards until snapping back into regular Nelli), Chakuro learns what happened to Suou, and seeks help from Lykos, Ouni, and Ouni’s gang (what’s left of it).

They come afoul of the guards, but Chakki is able to seduce Ginshu into letting them pass. They descend into the deepest parts of the Mud Whale where they’ve never been before, until they find Nelli with what looks like a Nous sitting in a giant…rocking chair?

I’l say this: with his primary role as one who must bear witness, Chakuro isn’t the most thrilling protagonist, but at least he’s working to save the Mud Whale and its people. He hasn’t given up. And whatever the heck is going on at the end, I’m definitely intrigued and want to see where this is going.