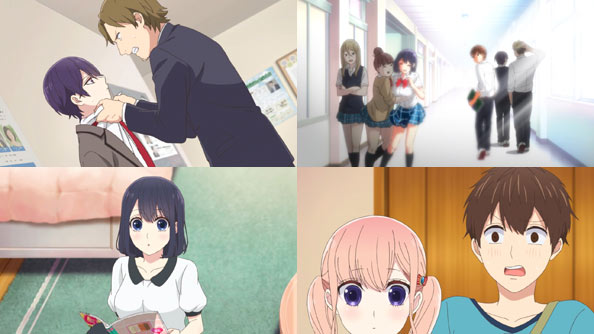 As Yukari continues to be pushed and pulled hither and thither by Lilina, it’s worth mentioning he wasn’t always so passive. Nisaka remembers being hassled by a bigger guy, and Yukari called the cops. Overreaction? Certainly, but it still took guts. He didn’t do nothing.

Meanwhile Lilina’s romantic experimentation continues apace; inviting both her betrothed and Misaki to her house; Misaki, who still utterly ignores him at school. 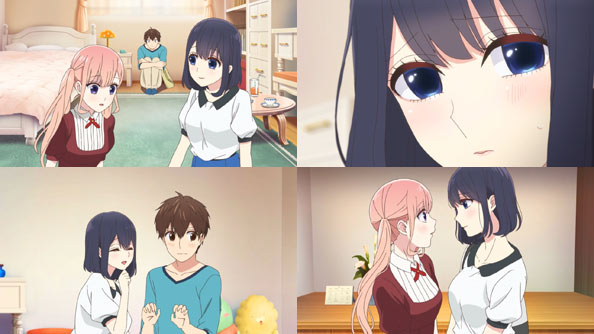 Misaki and Lilina get along swell, to the point the skittish Yukari simply fades until the background…but it isn’t long before Lilina asks to watch the two kiss—and they come very close to doing so, because Misaki (and not Yukari) leans into his lips.

At the last second, Yukari, flustered beyond belief, bails out, which Misaki thinks is “so cute.” Lilina can’t help but agree. But later, taking Lilina’s hands ever-so-tenderly into her own, Misaki tells her she wants her to fall in love with her future husband…because she doesn’t think she’s “the right girl” for him. 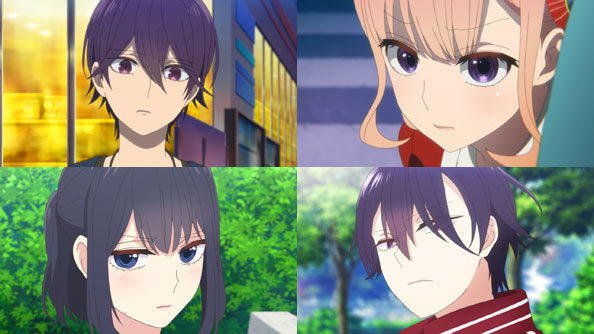 Lilina maintains that two people already in love—Misaki and Yukari—should kiss at least once a day, every day. As she walks part of the way with Yukari when he heads home, who should appear but Nisaka, who quickly labels Lilina (hiding behind Yukari) “well-tamed” and “still a virgin,” both very rude remarks Yukari should have been stronger to condemn.

Back at school, Yukari notices Misaki and Nisaka staring daggers into each other, and he immediately thinks the two most attractive people in his class (by his reckoning) look so perfect together that’s it’s likely, as unpleasant a prospect as it would be, that there’s something going on between them. 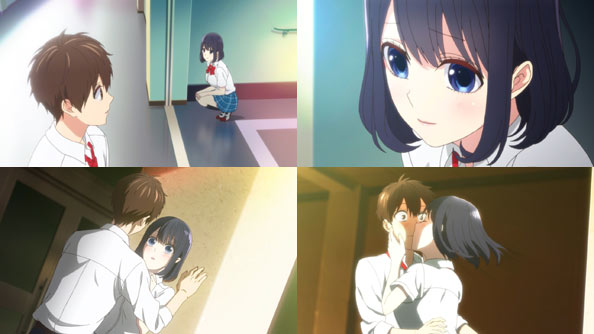 But while thinking and overthinking about it while changing after PE, Yukari finds himself behind the bell, and runs into Misaki in the hall, apparently waiting for him. He tells her about the kiss-a-day order from Lilina, but before Misaki can tell him what she told Lilina, a teacher walks past, forcing him to take her hand and move them behind a pillar.

There the two start making out, leaving Yukari to wonder how this could be “wrong” or “taboo” and why it’s so hard to lie and pretend they’re not something that they are; namely, in love. 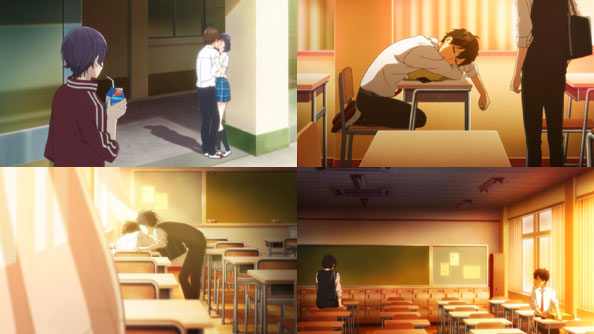 While the teacher didn’t spot the two kissing, Nisaka does walk right by them, and his reaction is cryptic. I was thinking right until he leaned over to a dozing Yukari to give him a kiss that the big secret the show wanted to reveal is that Nisaka and Misaki have been selected to marry one another by the government.

And hey, that could still be true, but just as Lilina maintains she doesn’t love Yukari (at least not yet; that seems well on its way to changing), Nisaka certainly isn’t into Misaki, and vice-versa. Rather, Nisaka is into Yukari, and Yukari is simply oblivious.

So now we have a love quadrangle. And that reveals another wrinkle this whole Yukari Law mess: no same-sex marriage. You got me, show: I had no idea Nisaka would kiss Yukari. And I still think he’s Misaki’s still-secret arranged husband. 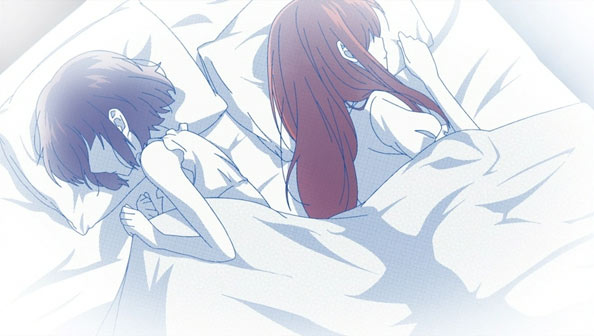 Just as Moca has a legitimate reason for loving Mugi (they’ve known each other a long time), Ecchan has one as well: Hanabi saved her from being assaulted on the train. When she ends up sharing Hanabi’s bed, Ecchan isn’t planning to do anything, but she just can’t hold back, and takes a gamble…one that doesn’t work out.

Hanabi thinks Ecchan is pretty, and she clearly values her as a friend, but when things get physical…it just doesn’t feel right for Hanabi, and not just because Ecchan is a girl. There’s a heavy weight she feels from being the object of Ecchan’s desires, accompanied by an acute, paralyzing fear. 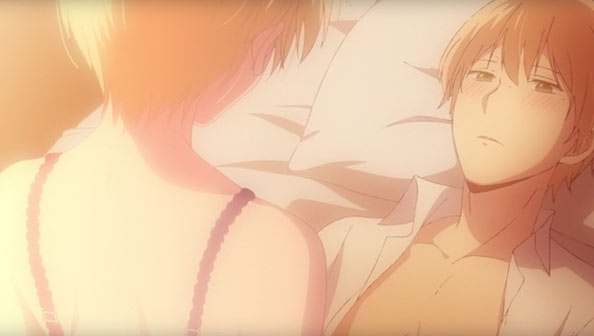 We learn a little more about what sent Mugi head over heels in love with his tutor Akane; he had his cherry popped by a beautiful senpai who later dumps him and breaks his heart. There’s every indication the girl he was with treated their fling as just a fling: casual, secret, fun while it lasted. Then she moved on. 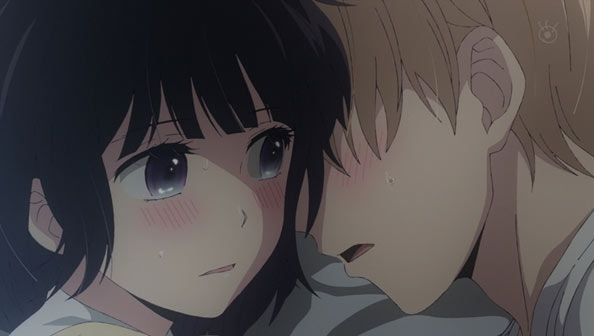 We see this unfold in what turns out to be a sexy dream Mugi wakes up from with an erection, just when Hanabi sneaks into his room for some contact. He initially stops her from touching him, worried he won’t be able to stop if they cross that line, but Hanabi doesn’t want him to stop, so she continues. 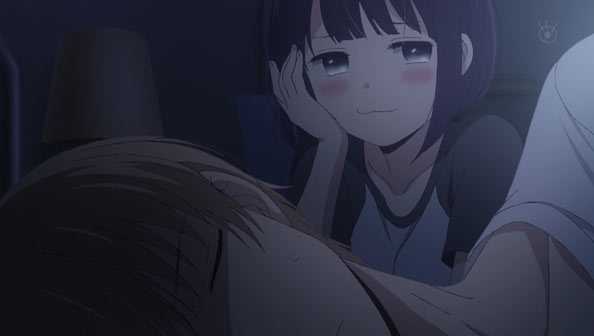 Just as he was once so inexperience with his first, Mugi no doubt sees a little of himself in Hanabi’s inexperience, but after she expresses a bit of smugness, she starts to tear up, because she’s realized something: what she gets from Mugi she can’t just get from anyone. She didn’t get it from Ecchan, whom she was too scared to touch. Mugi is different.

Then and there, he’s someone she can see falling in love with, even if he isn’t Onii-san. After all, if she came on to Onii-san, who’s to say he wouldn’t feel the same tense, uncomfortable weight she felt from Ecchan? This is Hanabi taking stock of what she has in Mugi and thinking about her best interests. 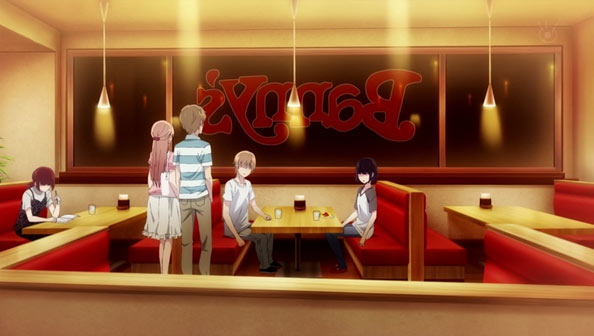 Later that night Mugi and Hanabi go to a family restaurant for dinner, and who do they run into but Akane-senpai, with a young-looking guy who definitely isn’t her brother who is really into him. Talk about awkward. Akane tries to be friendly, but the guy drags her away, clearly eager to continue their evening unfettered by her “students.”

The next day, Mugi tells Hanabi he recognized the guy as another student she’s tutoring. It’s all too clear he was more than that. Hanabi can’t believe how blind love makes Mugi, and is frustrated they don’t see things like this the same way, to the point she worries they weren’t as close as she thought. 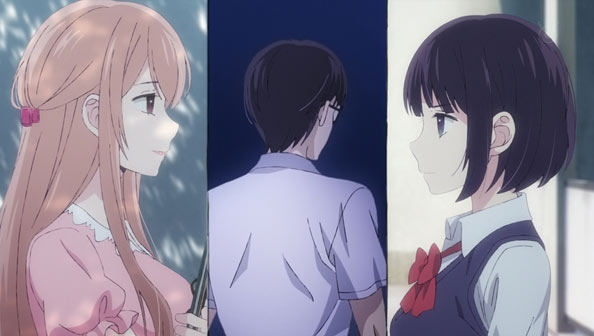 But then she realizes of course they’re not that close, at least not yet: their relationship, such as it is, has only just begun, and both of them agreed at the start they’d see other people in each other. Seeing Akane out in public with a different guy threw that plan into chaos for Hanabi.

She decides what she’s feeling now is something approaching hatred for Akane, which isn’t allayed by their brief, uneasy encounter in the schoolyard. Hanabi asks Akane (still wearing the same clothes from last night) if that guy was her boyfriend; she said it was just a friend, and that they can talk about it later. Assuming neither of them want Onii-san to find out about them being with other guys, Hanabi contemplates her next move as Akane, her back turned to her, cracks a wry, knowing smile.

Kuzu continues to excel with its serious, weighty but deft internal drama (not of the melo- variety) and quietly steamy scenes of sensuality (one of which ends with the mundane practicality of having to wash dirty clothes). We’re with Hanabi and Mugi all the way as they endure and explore their pain and pleasure; their playfulness and despair; their confusion and their revelations.