Look at all that WEED. 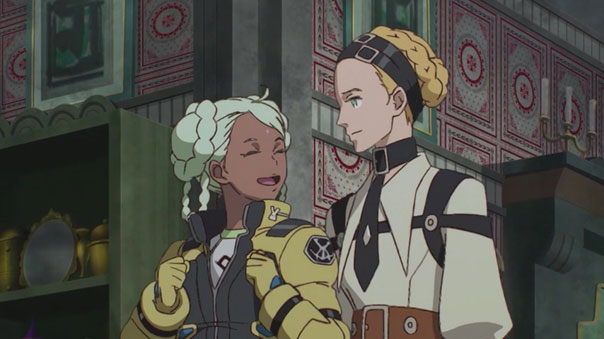 “Heh-heh…I am so stoned right now!”

(It’s never explained why Rara feels the need to laugh, then cry, in such an unnatural way. Though maybe I missed something.)

OH SNAP! Aida and Bellri are brother and sister? Well, no wonder their romance was going nowhere! Oh wait, that was because nothing was written for their romance.

This seems to piss Bell off, though I can’t imagine why, since he’s never mentioned anything about having feelings for Aida. Everything has been only vaguely implied, which is actually how all romantic relationships on Gundam G are like.

“Oh, BARARAAAAAAA, I love it when you talk dirty.”

Take these two. We’re just supposed to take it on faith these two are an item, just because they nuzzle up sometimes? 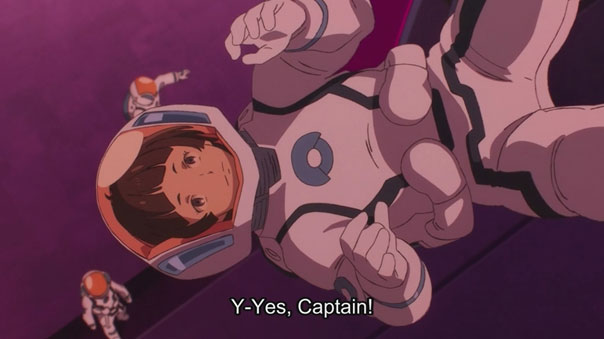 I still don’t see what Manny sees in him. Certainly not his eyes. Those are hidden by his mask.

Here are two more touchy-feely-kissy vaguely-implied couples. The writers just couldn’t bother to come up with a reason for them to be together, except the fact they work together, I guess. 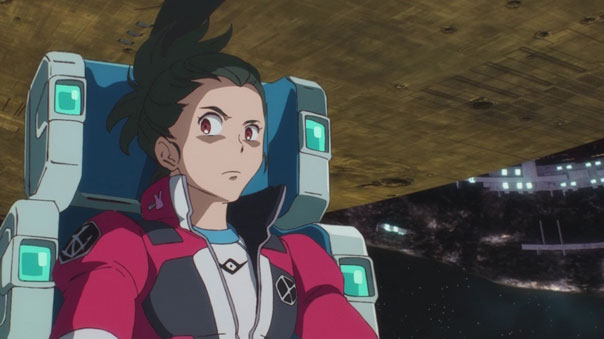 This is actually a pretty cool shot…reminds me a little of 2001, never a bad thing.

OH NO, NOT PONDS. If only it was lagoons…

You and me both, BZ. 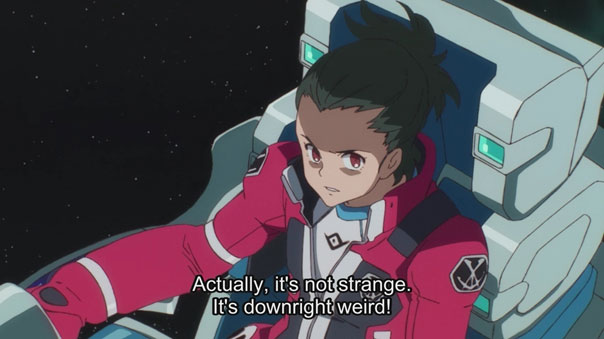 Another nice shot: this one with three different levels of scale in one shot: the mobile suits, the Garanden, and Cyrano-5, which we learned is named that because the meteor it’s built on resembles de Bergerac’s famous nose. Somebody read a book!…Or at least watched Wishbone. 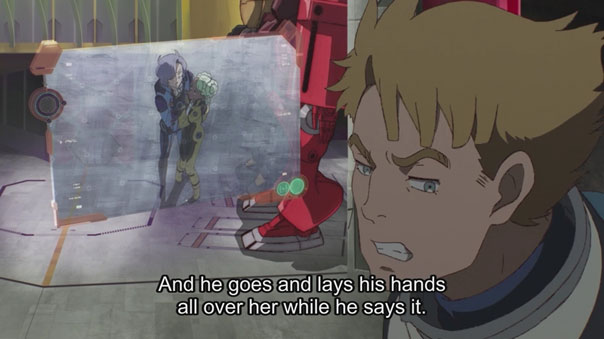 More touchy-feeliness! Although in this case, Rara isn’t interested in being touched.

Already playing the Sister Card, eh? Wait, there’s no such thing as a Sister Card! I’d know; I have a sister. So what the heck is he talking about? How does having or not having a sister have any bearing on whether Bellri kills his attackers next time?

Captain Gavan has the Titular Line!

No, but neither were any of the others.