Urie lies and gets his enhancement, confident he can become stronger than Haise and remain in control. Something tells me his internal isolation from his Quinx-mates and massive chip on his shoulder suggest he’ll probably fall flat on his ass again and need bailing out from the people he’s constantly looking down upon in his thoughts.

But meanwhile, there’s an op, and Quinx Squad needs to be at full strength. That means Shirazu, Mutsuki and Urie must join forces to draw Saiko out of her physical isolation, both from them and the rest of the world. Urie ends up convincing Saiko that she’ll be fired and thrown out on the street if she doesn’t do her job.

This is another lie; even if she retired tomorrow the fact she agreed to be in the Quinx squad means the CCG will always look after her…she just doesn’t know that because she didn’t read the handbook!

Regardless, while Urie and his aloofness are kinda bumming me out, I kinda love Saiko. She’s got a great energy…or I should say lack of energy to her, and is utterly unapologetic in her desire to live the NEET’s life of leisure. Whether she’s still hiding heretofore unseen wondrous powers or talents as an investigator or is simply meant to be comic relief…we shall see.

In any event, the whole Quinx Squad is mustered for the briefing about the Nutcracker. Specifically, Haise’s Squad will join two others and Division II in raiding an underground auction for young women the Nutcracker collects at clubs. While Urie goes off for some “tests”, Haise, Mutsuki, Shirazu and Saiko hit up the club, the former three posing as women.

It’s ultimately Mutsuki who manages to make contact and get on the auction list (after a little—or a lot—of liquid courage), so they have their in. Our old weird friend Suzuya Juuzou is also involved in the operation, and will pose as a woman for sale at the auction beside Mutsuki—no doubt to back up the far less-experienced investigator if things go pear-shaped.

After about a week of training (which Urie mostly stays out of), Haise’s squad and the others are all ready to execute the plan, and move in. Meanwhile, Ayato is tasked with bodyguard duty for the Class AA Ghoul “Big Mama”, who will also attend the auction, and has a very Mutsuki-obsessed Torso tag along.

Did I mention our other old friend Tsukiyama Shuu is gravely ill and no longer seems to have any “gourmet” sense, much to his servant’s distress? Well, he doesn’t, so I guess he won’t be at the auction. But with all the parties who are involved, plus a few who may not have shown their faces, it’s shaping up to be quite an op.

Sasaki Haise bails out his subordinates when Urie bites off more than they can chew with Orochi. Heck, even Haise has to take off the kid gloves, and eventually loses control when the Kaneki Ken within him tries to take over.

Akira herself has to take him out, with help from other CCG officers. Orochi gets away, as does Torso. Everyone’s alive, but the mission is a failure.

For his recklessness, Urie is removed from the leadership of the Quinx Squad, and Shirazu is promoted in his place. Urie gets in a “you’re just a ghoul” dig at Haise, but it doesn’t matter; Haise’s word is law in the squad, so his climb to the top just hit a serious snag.

Later, Urie assures a concerned Kuroiwa that Haise will be fine, all while cursing him and hoping he’ll just go die. This Urie guy’s carrying a lot of resentment and hate. 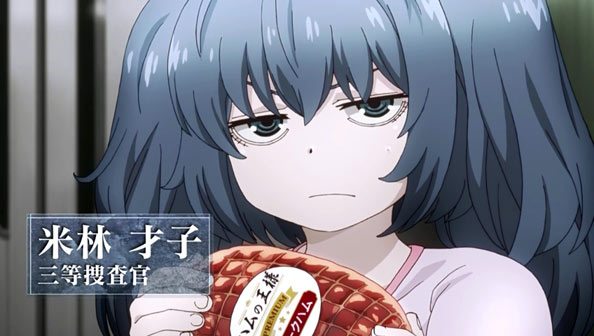 We also get our first sighting of Saiko, but just long enough for her to grab a little ham from the fridge and run off back to her room, presumably to scarf it down.

I’m not quite sure why we’ve seen so little of her (besides the fact she’s, well, a shut-in), but something tells me despite her uninspiring demeanor she might be the strongest of the Quinx other than Haise—if we don’t count Urie’s current (and possibly ill-advised) campaign to increase the strength of his kagune. 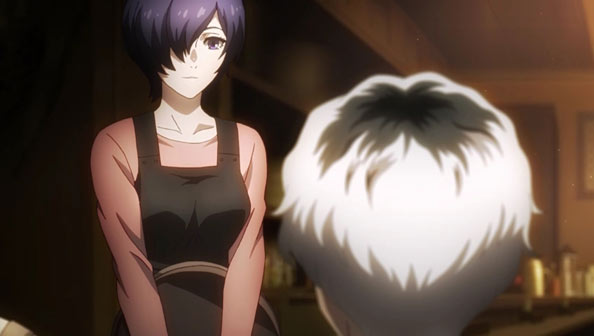 Finally, we get the biggest of the cameos from past TGs as Haise, Mutsuki and Shirazu go to the Re: cafe where a slightly older Kirishima Touka works, and seems to recognize Haise (or the Ken within him).

Meanwhile, Touka’s brother Ayato is apparently the new “Rabbit”, still affiliated with Aogiri Tree and apparently letting Torso join as well, which puts him out of the Quinx Squad’s jurisdiction. Instead, their next assigned target is red-light district ghoul nicknamed “Nutcracker,” who does precisely what her nickname says. Quinx could use a win after Orochi and Torso; maybe this will do the trick.