One third of TenSura’s second season’s second cour has now been one long glorified infodump, featuring nothing but people standing and sitting around discussing things. There’s even a brief recap of last week’s talking, before we go right back into the next stage of talking. Who in their right mind would think this is acceptable method of storytelling?

Ramiris, who showed up and fell asleep last week, finally wakes up and offers some details about the threat to Tempest that probably isn’t any threat at all. Considering what happened the last time an enemy tried a coordinated attack on Tempest, it went…poorly. That, along with this constant parade of drab meetings, saps any potential drama or peril regarding another attack. 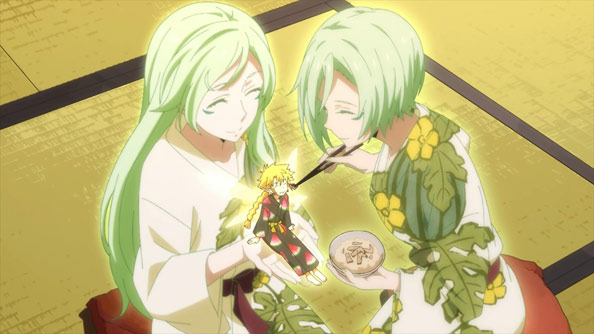 If there’s one improvement to this episode over the previous three, it’s that at least Rimuru & Co. go somewhere other than the conference room or gazebo. They hang out in the hot springs, then have a meal in the spa’s dining room. And as annoying and grating as Ramiris is, it is exceedingly cute watching Treyni and her sister pamper her.

With the announcement that Clayman may be launching an attack on Eurazania and not Tempest, and that Rimuru & Co. are too far away to lend any timely aid to the refugees there, there finally seems to be some momentum towards actual things maybe possibly happening next week. But I’ll still expect more meetings and more talking until shown otherwise. I’ve already been fooled for the better part of a month. Enough’s enough!

Amen, Gobta. Gobta is me right now, after enduring another interminable episode packed with people standing or sitting around talking about everything they’re going to do instead of actually doing anything. A full quarter of Slime’s second season’s second cour has been nothing but exposition. When I think of how much To Your Eternity gets done every three episodes, it really puts TenSura’s leisurely start into relief.

I like to see Gobta dozing through the endless talking as a sign even the producers know this is a bit much…but that didn’t stop them from making these episodes! When I go through all of the information I received, I can’t help but think it could have been presented a different way. A cutaway or two to illustrate the scenarios brought up, perhaps? This ain’t rocket science, it’s anime production!

The best part of this episode is when it ended. Yes, it was nice to see Ramiris again, but despite the episode being called “Ramiris’s Warning” Rimuru doesn’t take her warning seriously, and she spends the remaining 90% of the episode lying unconscious on Veldora’s leg.

It’s also downright odd to hear Rimuru cheerfully planning on intentionally causing a civil war in Falmuth that will probably claim the lives of thousands of innocent civilians. That’s some villainous shit, discussed with upbeat music in an idyllic English-style garden. But I won’t mind Rimuru committing any number of further atrocities…if he and his pals would just leave that frikkin’ gazebo and do something!