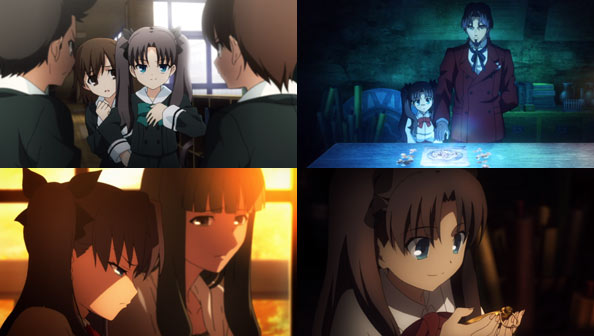 Fate/Zero takes a slight detour from the various machinations of all the Masters of the Holy Grail War to focus on one of their children, specifically (one of) Tokiomi’s (two) daughter(s), Rin. I know Rin from UBW as a kind, brave, talented and headstrong young mage, and her seven-or-eight-year-old Zero self seems to possess all those same qualities.

Following her father’s every word of guidance, young Rin seeks to develop a “reserved and elegant” magic befitting the Toosaka name; of course, she’s just a little kid, and as such has far more potential than proficiency, but Tokiomi is a patient teacher and clearly has big plans for his progeny. However, it’s not safe in Fuyuki City, so he sends her and Aoi out of town for their protection, giving Rin a mana compass as an early birthday gift/bribe. 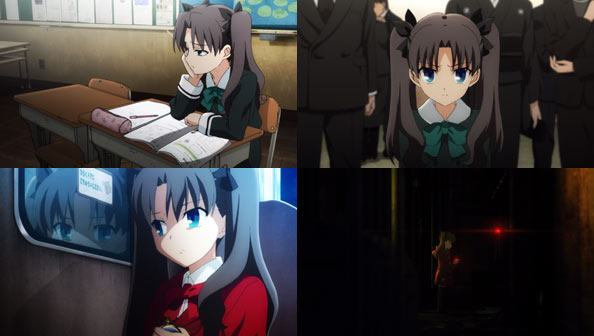 Rin is well-liked at school, happily spreading her considerable book smarts to her classmates and defending the weaker ones from bullies, who show no interest in going up against her. But one day classmates start to disappear from her school, one ends up dead, rumors fly, and finally her good friend Kotone vanishes.

Rin being Rin, she doesn’t leave the solution to this problem up to the adults, and hops on the night train to Fuyuki to sleuth around…rather randomly actually, but hey, this show is called Fate, so it must be fate that Rin happens to find the perpetrator of the kidnappings in the space of a few hours of wandering the night streets (which the episode makes clear are no place for young kids). 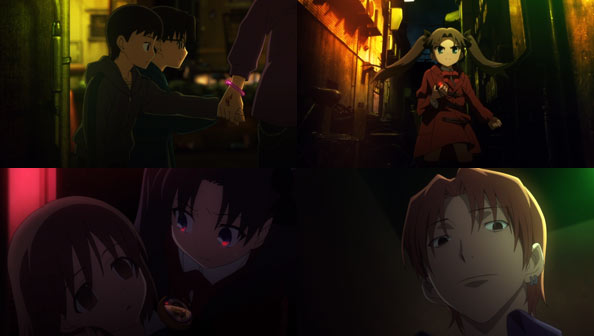 Rin follows the strange man with two kids in tow and a glowing purple bracelet. She doesn’t follow him particularly quietly—causing a racket when she accidentally knocks over some garbage—but she eventually comes upon an abandoned bar where she finds Kotone and many other kids in some kind of trance that renders them unable to defend themselves.

While trying to rouse Kotone, Uryuu appears, and is happy to find another “guest” has arrived of her own accord. Considering Uryuu is the “kid murderer” among the Masters in the Grail War, it seems only fitting to show him from the perspective of a kid, particularly the kid of another Master. 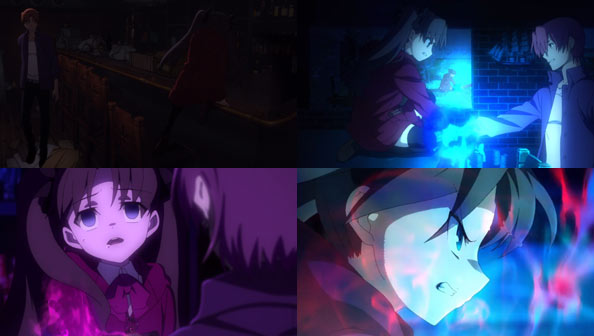 Unfortunately for Uryuu, Rin isn’t your typical grade-schooler, and she summons all her spunk in maneuvering herself into a position to grab Uryuu’s bracelet and destroy it with her mana.

At first, the bracelet seems to affect her like the other kids, but she fights it back, and the bracelet eventually shatters, staggering Uryuu and awakening all the kids, who Rin leads out of the bar. Uryuu is less concerned with them escaping than the condition of the bracelet and the mood of the “big guy” (Caster) when he hears of this incident. 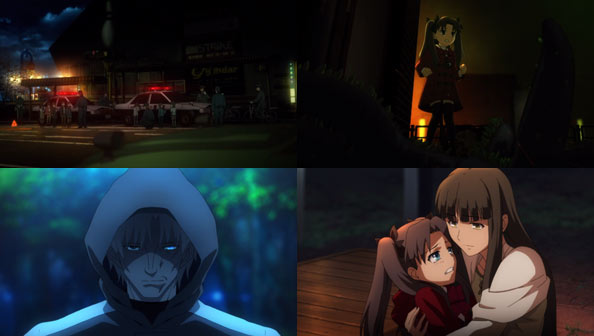 The police are called and all the kids are reunited with their parents, but Rin stays in the shadows, not wanting to take any credit for her heroics lest she be scolded and sent back not home, but away from it. All of a sudden, some of Caster’s tentacle demons take an interest in her, but they are eradicated by Matou Kariya, who either happened to be passing by, or had been monitoring Rin the whole time, concerned for his old friend’s daughter’s safety.

Aoi arrives in the park to find Rin sleeping peacefully, being guarded by Kariya, whom Aoi hadn’t seen since his grotesque transition into Berserker’s Master. He promises Aoi that he’ll win the war and free Sakura from the torture of being a Matou Mage. Aoi worries Kariya will kill himself after killing Tokiomi.

As for Rin, her big adventure taught her that she still has a long way to go before becoming a reserved, elegant mage. But with hard work, perseverance, and obedience to her folks, well…we know how she turns out. It is a bit sad to think that the course of her life, as well as those of Ilya and Sakura, are already all but mapped out, due to their obligation to their families. But that’s just Mage Life, I guess.

Like Loading...
As Tokiomi apologizes to his Servant Archer (AKA Gilgamesh) and begs him to be patient as the plan unfolds, Waiver celebrates the death of Assassin, but his Servant Rider (AKA Iskandar) doesn’t really care, and is far more concerned with acquiring B-2 Stealth Bombers and other weaponry with which to defeat…Bill Clinton.

I enjoyed the contrast between these two Servant-Master pairs, with Tokiomi exercising the utmost deference to Archer, who abides by his wishes while Rider is more of a constant nuisance to Waiver, who can’t even get him to enter spirit mode. I can’t blame Rider; Waiver may have shown guts in stealing the relic with which to summon him, but he hasn’t done anything to inspire confidence since then.

Rider’s not caring about Assassin’s death is just as well, since Assassin isn’t actually dead; he can take the form of many different people. What is dead are Kirei’s chances of winning the War, so he withdraws and is granted asylum in the Church by the observer, his dad Risei, and plans to use his Assassins to spy on all of the remaining Servants for Tokiomi.

Meanwhile, with Saber summoned and ready to go, she accompanies Irisviel to Fuyuki City, her love’s hometown, and the first place she’s ever left Einzbern Castle to visit. While Iri sightsees, Saber is her knight and bodyguard, wearing a stylish, practical black suit that contrasts nicely with Iri’s snow-white garb. They make a stunning pair…even though Iri isn’t Saber’s real Master.

That guy, Kiritsugu, arrived in Fuyuki a bit earlier, and enters a hotel room to find his assistant Maiya and a cache of weapons with which he’ll fight the War. When his thoughts turn to his frail daughter and he momentarily despairs, Maiya re-centers him by taking him in her arms and kissing him.

Whatever history those two have, I doubt it’s a threat to the union Kiritsugu and Irisviel, an unexpected pairing, but both a necessary and intriguing one. Their love for and trust for one another is above reproach. Irisviel, meanwhile, enjoys a walk on the beach with her night in black tailored suit, until Saber detects trouble nearby.

The women head to the harbor, where the Servant Lancer is waiting for them, but with no Master in sight. Far from being concerned by a potential attacker in the night, it would seem Irisviel was acting as a faux Master of Saber in order to accomplish what came to pass: luring out the last Servant unaccounted for.

As for who commands Lancy, I’m not ruling out Archibald, who has been curiously absent despite Waiver having stolen his relic for Rider. And as for who will win this duel, I suspect neither party will end up dying, since we’re only three episodes in. A draw, perhaps? Either way, I can’t wait to see it.

Zero continues to excel where often UBW fell down, managing to make virtually every patch of dialogue (or monologue) compelling, integrating just enough comedy to avoid being too stodgy or serious, and most important, making every participant either eminently rootable, deliciously loathable, or a lovely synthesis of the two.