Goddamn, that hallway was long. It gives Shinako a chance to lose her nerve so that by the time her key is about to go into her door, she can’t invite Rikuo in anymore, and has to send him home. It’s a pretty brutal move on her part, but it’s not as if Rikuo ever does anything to turn things around. The two came right up to the cusp of something potentially life-defining for them both, but came up just a little short; the ultimate harsh needle scratch.

When Rikuo reports back to Fukuda, Fukuda breaks it to him that another heat-in-the-moment chance like that will most likely never come again. Shinako reports back to her friend, who sits there wondering what the problem is. If she likes this guy, they should go out; simple as that. She can’t keep comparing this to her by-now-utterly romanticized late first love. Both feel foolish, but don’t necessarily regret how things turned out.

Rikuo wonders if Fukuda is right, and his hesitation is borne from a lack of professional confidence. But at least he’s decisive on the photography studio front. In a lengthy montage during which he’s not around Shinako or Haru, he works his butt off and eventually secures a full-time position. He quits the convenience store, at which both Haru and Shinako cross paths while stopping by.

Not wanting to never see Rikuo again, Shinako waits outside his place to talk, and while their conversation is bumby and awkward and little more than small talk, it shows the two can still face each other. What ends up troubling Shinako is when she suddenly finds herself being animated like Haru, pointing at him and parroting her words about him “really going for it” when he makes up his mind. Why, she asks herself, is she acting and talking like someone who “declared war” against her? 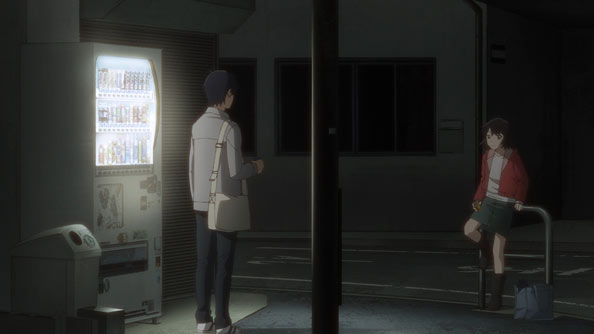 The next night, Haru waits a long time for Rikuo to come out of his office, and calls him out for not telling her about his recent career changes. He says none of it was meant to be secret, but he hadn’t the chance to tell her. Like his talk with Shinako, it’s awkward, but also a little tense as Rikuo tells her she shouldn’t “go out of her way” to wait for him anymore. It’s so soft a rejection, but it all but confirms to Haru that like the convenience store, Rikuo may have moved beyond her.

It’s become somewhat clear that it might in the best interests of everyone in this show not to end up with anyone else, though one could use the events of this episode to argue for exception in the case of Rikuo and Shinako, who are simply in uncomfortable awkward territory due to recent developents, rather than overtly trying to force things (as Rou did rather ham-fistedly).

As Rikuo tries to move beyond both the convenience store and Haru, Shinako ends up retreating back to Rou’s house, cooking and cooking redundant food late into the night until he comes home and he can welcome him. While she doesn’t want what Rou wants, she still wants Rou in her life.

Shinako wants that familiarity, that warmth and comfort, without the awkwardness or sudden turns into romance. And who can blame her! I just hope that by choosing not to continue to run from Rou by returning to that kitchen, she hasn’t started running from Rikuo, or the choice her girlfriend said should be an easy one to make.