It’s a little detail, but I appreciate the fact that we see Yukina and Ken finally getting paid by the UN for their services. Everyone else working there seems to be. It also lets us know it’s been about three months since they started working together. The sudden influx of funds leads to Yukina taking her family to a hot spring inn. Mika catches word, unilaterally invites anyone who will come, and we’re off to the races. 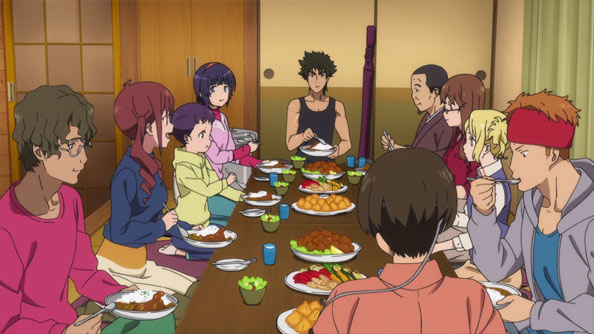 The hot spring inn isn’t the most luxurious—no food service and not even any close hot springs—but the ten attendees make do, and Ken uses the $400 pot he bought online to make curry (with Yukina’s help). The centerpiece of the episode is a long dinner scene that to its credit looks like a really fun place to be, unless of course you’re Carlos.

He tried to be clever about announcing he’s transferring but his cosplay video editing job was universally panned, and the announcement (and his on-screen plea not to be forgotten) is ignored in favor of other myriad conversations. The scene has a great energy, jumping from one discussion to another with several interruptions and interludes, just the way a big group dinner works in real life.

Once it becomes time to check out the actual hot springs the next morning, Yukina happens to forget her towel, and she and Ken happen to go the wrong way and find a different hot spring than the others, where an injured Muetta just happens to be hiding.

We are tipped off to Muetta being at a hot spring before the encounter, and we actually catch a glimpse of her life as a child back home, a gorgeously alien world with crazy sky colors and celestial alignments. It makes her argument that she is not Ken’s princess a lot easier to buy. At least, she’s not lying when she says she has no memory of being Yukihime.

Not long after Yukina and Ken find Muetta, men in black show up to secure the location…only for Yukina and Ken to end up separated again, and in that moment, Yukina is snatched up by an Efidolg robot and rises up into orbit, leaving her robe behind.

I wasn’t a fan of all the coincidences necessary for that ending to be achieved. This also smells like yet another case of Poor Defenseless Yukina being kidnapped—while naked, no less—and the Dashing Samurai having to find a way to rescue her. Not the most innovative storytelling. Also, while the emphasis on him is played mostly for comedy, I just don’t really care about Carlos, or whether he ceases to be on the show or not. Why should I, when no one else does?

Still, I liked the slice of life vacation elements, and I did not expect things to end so badly, so quickly, for Yukina and Ken. Yukina suddenly being up in orbit, at the mercy of those thoroughly unpleasant Efidolg knights, is a huge turning point—As is finally having Muetta in custody. I don’t doubt that in his desperation to quickly save his new princess, he’ll try to enlist the help of the old one. Pulling that off should prove even tougher than salvaging Carlos’ hack job. 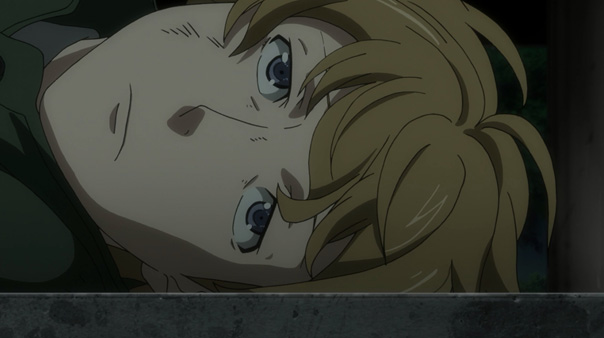 Given the ample resources of the Prime Minister, he can shout his lies loudly and consistently enough that the public comes to believe them as truths. Masayoshi has hit rock bottom not because his career has been destroyed and he’s homeless, hungry, and filthy, but because he has almost lost hope. He feels a fool for allowing the government to manipulate him, and sees world around him as a hostile enemy.

Stuck in this downward spiral and unwilling to steal or ask anyone for help lest he hurt more people with his selfish actions and dreams, he ends up becoming the recipient of aid from a Good Samaritan in the form of a poor, nearly-blind chap living in a tent in the park. After Masayoshi regales him with the abridged version of his story, the man tells him his: he was in the same spot Masayoshi finds himself: angry for being fooled and devoid of hope for the world. When a thug started beating him, he was ready to give up and die. Then Samurai Flamenco saved him.

All it took was one kind, decent, good act for the man to realize he was wrong about the world. He started to help people, and they helped him and others in return. His world became a better place, but only because he refused to give in to despair and cynicism. He returns the favor, facilitating Masayoshi’s escape from a patrolling cop. The encounter reminded Masayoshi that even heroes need saving from those psychological villains. So he finally pays Gotou a visit, and Gotou asks what took him so long.

This is the Gotou who took Mari in when she too became lost, but also allowed Mizuki and Moe to confront her when she’d spent enough time stewing in her own angst. We mercifully, finally see that confrontation, and it’s a heated one, with lots of thrown punches and scathing remarks that cut to the quick. Mari hates Moe’s face right now because it reminds her that she’s a coward; that Moe volunteered to die for her in order to show her up. Like Masayoshi, she feels the world has turned on her, and she just wants to curl up and die.

The other two M’s don’t let that happen. Even after she rips them to shreds about how much they depend on her greatness (Mizuki doesn’t dispute this, but hates the pathetic creature Mari has become) and flees to the place where King Torture tortured her, where she vomits and lies in it. Moe and Mizuki find her, and Moe, wearing a bag on her head, convinces Mari to return to their world, which isn’t complete without her. It was a showdown we’d been waiting for, so kudos to the show for finally giving it to us. It didn’t disappoint.

We also appreciated the symmetry of Masayoshi and Mari, at the end of their ropes, seeking out and being sought out by their best friends, respectively, and that the entire episode was devoted to the characters and relationships that had been neglected of late. It was welcome reparation for all the From Beyond shit the show put us through. With wounds healed, friendships repaired, and faith restored in the inherent, indomitable goodness of the world that shines beneath even the most well-funded lies, everyone’s in good shape for the final six episodes.