While resting before trying to figure out what to do next, Kino hears some rumbling in the distance. An earthquake? An avalanche? No … a country.

Neither this country nor any of its inhabitants are ever given names—the people only introduce themselves by their title(s)—but it is the coolest country Kino has visited yet: a country that moves.

Technically, that makes it a gigantic vehicle, so Kino does what one does when a vehicle approaches: thumb a lift. While the country-tank is initially a menacing thing, a kindly voice asks Kinos her intentions.

She’s then welcomed aboard with open arms by the immigration and diplomacy officer, who has a comfortable room available, with a bed with clean white sheets Kino probably hasn’t seen in a long time.

After beholding the consequences of shushing Hermes (who warned Kino to dry her hair before going to sleep) and fixing her bed-head, Kino continues her tour of this wondrous, awe-inspiring place full of contradictions—the same contradictions that face every country.

The country is powered by an advanced, self-maintaining reactor, but in order to avoid overheating (or perhaps a straight-up meltdown), the country has to be kept constantly moving, meaning the drive motors and caterpillar tracks must be carefully maintained.

But that’s not the only reason they keep moving: the people of the country, like Kino, want to explore the world as she does. The only difference is they all go together as a country, and take their country with them. That means leaving quite a mark, but the people have long since made their peace with that.

While maintaining the motors and tracks must be quite a feat, the scenes of life Kino sees are of a peaceful country where families relax in the lush rooftop park and schoolchildren paint murals on the country’s outside shell. Contemporary cars are driven around, and tablets are used. It’s a very comfortable living. 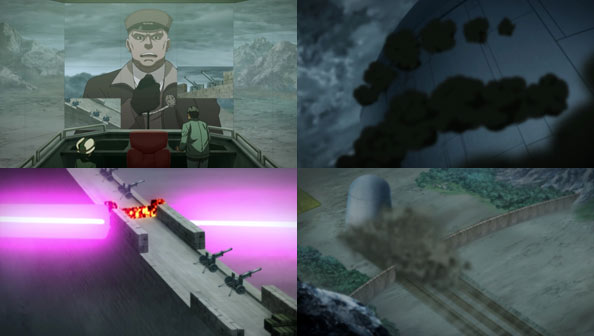 Throughout this flowery tour I kept waiting for the catch, but in terms of the people turning on Kino or becoming threatening in some way, that never happens. These are nice people, but their country is a huge nuisance what with the tracks it leaves, particularly when butting up against a conventional, immobile country.

Still, the leaders have no problem allowing Kino into their command center. After asking for and being forcefully denied passage through the country, those leaders simply shrug and order the country to press on. That means firing a laser to obliterate the border wall in their path.

While armed with artillery and missiles, nothing the other country has is any match for the moving country, which mows down everything in its path. Those aboard it can only apologize and assure them they’ll be out of their hair within half a day. 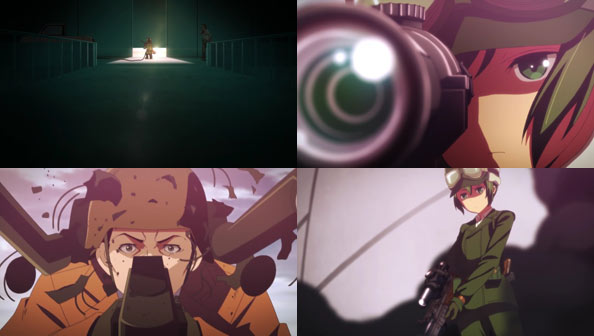 When the other country finds something they can damage—the children’s mural—the moving country goes on the offensive. Wishing to minimize casualties on the other side as much as possible, Kino steps forward offering her assistance.

She heads out to a vantage point, armed with her persuader sniper rifle, and efficiently destroys all of the missile guiding sights—without killing their operators. She also takes out a couple of stray missiles for good measure.

With that, Kino cements her role as a friend of the Moving Country…but she said at the start she was only there for a sightseeing visit of 5-10 days, and when those days are up, she bids the country farewell.

On to the next, not-moving country, but Hermes relays to her the very distinct possibility the next children’s mural will feature her fighting off the missiles.

And while the Moving Country is extremely intrusive to other countries its path happens to intersect with, it’s not like they have a choice! If they stop, the reactor blows. If they just drive around in circles, they’ll eventually lose their minds.

Moving is how this country survives. There is a cost to that survival, but it is acceptable. If they wanted, they could easily conquer and subjugate any other country or countries they wished, but they don’t. They only destroy what they must to keep moving.

More ways of the French bemuse and confuse young Yune this week. She constantly wants to be of use, but in her new Parisian life, she’s neither required or expected to constantly work. She should fine time for leisure, to celebrate her freedom, to spend the money she’s made. But she’s having trouble understanding.

When I was in Japan I was amazed by how consistently kind, friendly, and helpful shopkeepers were, whether it was a 7 Eleven or a Toyota dealership. You receive a hearty welcome and the smiles hardly ever leave the faces of those working. Yune has this same mentality, but Claude warns her that in France, being too friendly or emotional to customers can scare them away.

When a young lad makes off with a candlestick (to later sell for food), she gives chase and gets lost in the gallery, neither of which boost her self-worth. When everyone either ignores her or gives her a strange look, she decides running and closing her eyes to be the best course of action, and…it is! She bumps into Claude. He repeats to her that her safety is more important than any item in the store. Yune took Claude’s advice too seriously. But she is learning.

Oscar makes a good point about a lot of the store’s wares (before going on a booty call): when electricity and such arrive, they’ll be rendered even more unnecessary. However, even things that are no longer useful are worth protecting. Do we still need butter churns? Or katanas? Not really; but those processes are a part of culture. Such arts must be preserved. Claude means to do that, and Yuna aims to help.