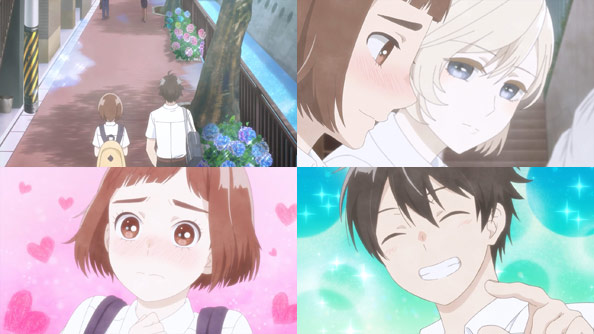 At least, for a little while, we get to experience the pure initial jubilation of Kazusa and Izumi being a couple, meeting outside their adjoining houses, and walking to and from school together. Everything looks brighter and shinier, food smells and tastes better, and Izumi looks cuter to Kazusa’s eyes. They’re very much on cloud nine, but throughout it all there’s the underlying knowledge that it just can’t last. 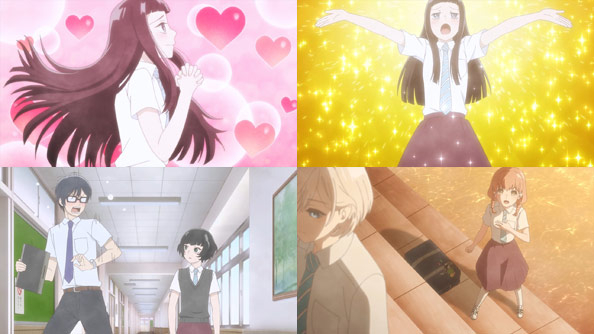 Rika, too, admits she has changed, as a “victim of love”, but has also learned that boys are far more sensitive and nuanced than she thought, and tells the rest of the club to value them as humans—something only she didn’t do before.

While all five girls were in one way or another “losers,” now suddenly Kazusa and Rika are “winners,” having broken the plane of boy-girl romance, and their subsequent floating on clouds does not go unnoticed by those left behind. As a self-proclaimed “loser” himself, it’s Milo-sensei’s experience that winning stifles the imagination, which suits Hitoha just fine.

You could also say that winners are so busy winning their guards are down. Kazusa buys Niina’s half-hearted congratulations, but what Niina doesn’t tell her is that she’s still considering whether to steal Izumi from her, and if so, how. Momo isn’t okay with that, and promises Niina that losing two friends (her and Kazusa) for one boy isn’t worth it.

Niina begs to differ: after all, saying she can’t have sex with mere friends—something Momo doesn’t seem that sure about. 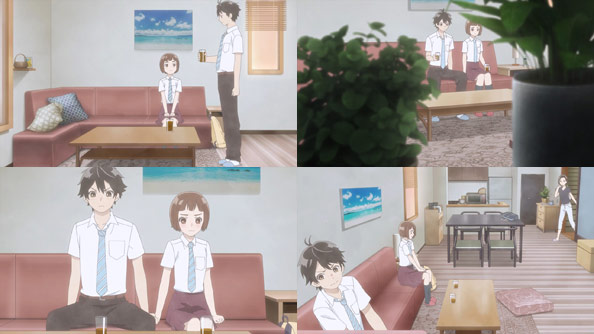 So as their destruction is plotted, Kazusa and Izumi go about their wonderful glittery romance…only the glitter gives way to awkwardness when they find themselves alone in Izumi’s house together. What’s the next step for them? They have no idea, not just what they want to do, but what the other person wants to do.

They aren’t communicating properly yet, nor have they set boundaries or lack thereof, so they make assumptions, some of which are right, like Izumi sitting beside her. They hold hands together, but they both get hung up on how sweaty their hands are, and then Izumi’s mom comes in and suddenly they’re six feet apart. 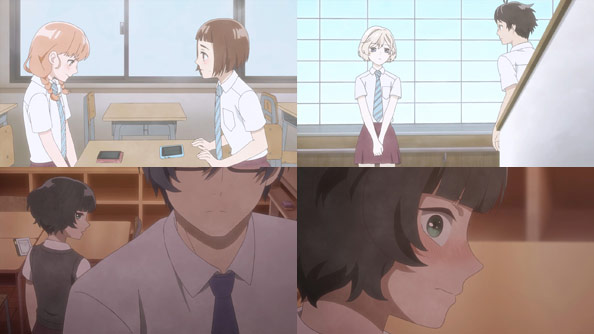 Meanwhile, the fact Kasuza is with Izumi and Rika is with Amagi means the lit club is suddenly taking a break, giving the recent festival as an excuse, but let’s not fool ourselves: Momo and Hitoha and especially Niina are only going to sit and listen to Rika and Kazusa talk about how great it is to be dating boys for so long.

So Momo goes home alone, not knowing quite what to do about the rift between Niina and Kazusa. Niina invites Izumi to “ride the train” with him assuming she’s willing to offer advice as a friend. Hitoha ambushes Milo-sensei in the clubroom with an “expose,” and give him an ultimatum: sleep with her, just once, or everyone, including his beloved Tomita-sensei, will find out about all the things he’s said to a high school girl.

While I doubt Hitoha was simply bluffing here, the fact remains, she wasn’t 100% prepared for him to not only say “okay” to an offer of sex, but set a time and place for him to pick her up. Milo is quickly approaching the point of no return, but his feelings for Tomita, and the threat of her knowing how deviant he’s been, are clearly clouding his judgment.

Later, Hitoha waits at the agreed-upon time and place, and gets in when Milo-sensei stops and tells her to, tossing her underwear into a nearby garbage can. No good can come of this! 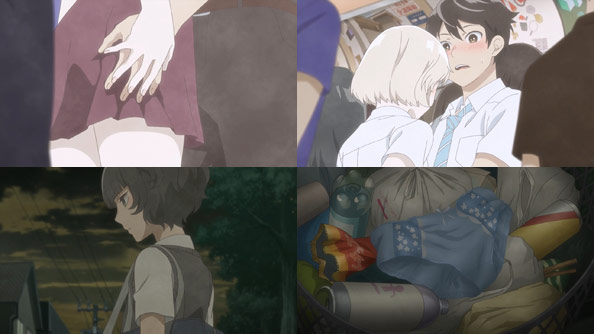 In a nice bit of synergy, the same book that Rika and her new gal friend Sonoe (with whom she now interacts far more comfortably) bond over in the library is the book Niina presents to Izumi on the train, describing his relationship with Kazusa to the The Little Prince and the one rose on his planet. When he went to earth, he found that roses were commonplace, but a fox told him that the sum of his time and experiences with that first rose make it unique.

Saegusa tells Niina that she’s the fox, saying the words that will lead to the Prince living the rest of his days with that one special rose, while the fox itself is never mentioned again once they part ways. To not be forgotten like the fox in the story, Niina has to make a bold move.

Whether someone was actually touching her bottom on the train once it gets crowded is immaterial; the point is, Niina wanted a situation in which she could tell Izumi to place his hand on her bottom. Not only that, there’s now a record of their exchange on their phones she could potentially use against Kazusa.

So one of Izumi’s hands is sweatily, awkwardly clutching Kazusa’s as the ticking of the clock grows louder and louder, and the other hand is resting on Niina’s bottom, with Niina’s hand guiding and keeping it there. So, as is asked many times in the heads of the characters this week, What Now? 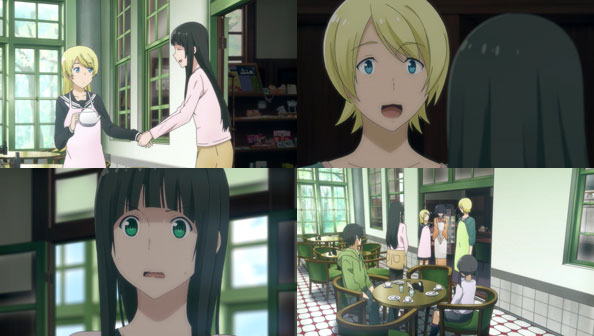 Makoto Chinatsu and Kei just be chillin’ like vanilla villains playing violins in a villa. Put less poetically, they spend the entire episode hanging out in the cafe, meeting its owner (mistaking her for her nearly identical daughter at first), are formally introduced to Hina the ghost, and also meet some of the cafe’s regulars. 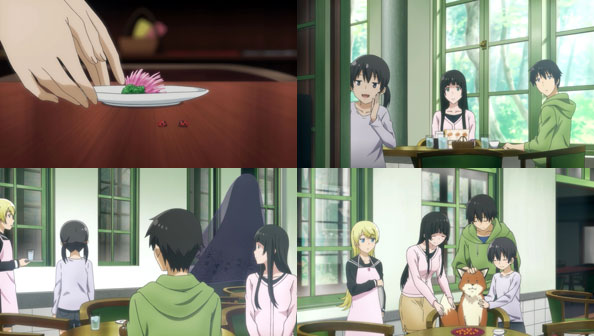 Yet no matter how insectoid (the thistle-eating ladybugs), vulpine (the cherry-loving fox), or intimidating (the Veil of Darkness and Bringer of the Night, everyone they meet is nice, welcoming, and friendly, even if Chinatsu is being a bit nosy or intrusive.

The overall feeling is that this definitely a cafe where I’d like to spend some time, sip some tea, and munch on some pastries. Anzu’s mom’s comment about Kei not having to worry about being “normal” (because he hangs out with witches) was pretty funny, too. 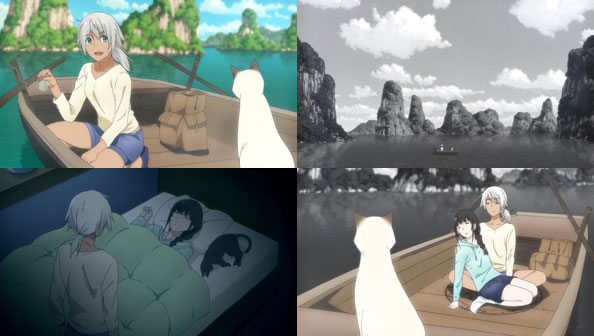 While the others are at the cafe, Akane is hard at work on a potion, but for what we don’t learn until after the credits roll, Marvel-style. She teleports with Kenny all the way to otherworldly, picturesque Ha Long Bay in Vietnam, where she accidentally turns the entire landscape monochrome.

It’s temporary, though, so rather than panic, Akane teleports back to Aomori, grabs a half-asleep Makoto, and has her snap a photo of her and Kenny…which Akane later remembers as a strange dream. But that’s life as a witch: sometimes things get a little surreal and dream-like, and ya just gotta roll with it. 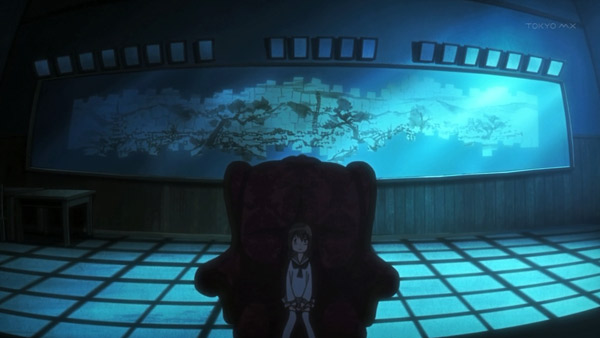 This episode documents the young Koto’s life prior to entering the Mirrored Kyoto and becoming the ward of Myoue. Abandoned at a very young age, she was taken in and trained by Inari (AKA “The Fox”), and despite early complaints by his peers, she proves to have a great deal of talent. When Koto suddenly appears in the Mirrored Kyoto with her two familiars, A and Un, the Council of Three (the siblings Kurama, Myoue, and Yase), they debate whether she is related to them, or could actually be the reincarnation of their mother, who shares her name and eyes.

It’s just a fact of anime that whenever there are two characters with identical eye color (in an anime where not all characters have the same eye color, that is), it almost always means they’re related. So it’s no coincidence that lil’ Koto has the same red eyes as the departed Lady Koto or Myoue Shounin, just like it’s no coincidence that Inari also has the same color eyes. The narrator in the very first moments of the episode is also quite clear: “This is the story of one family’s love and rebirth.” Meaning Inari and Koto could well be Shounin and Lady Koto, reborn.

Mind you, the episode doesn’t come right out and confirm anything one way or the other, while the dream-like sequences of Koto and Inari in the secret room with the drawings of Mirror Kyoto and Koto the rabbit don’t make things much clearer. But whether she’s Myoue/Kurama/Yase’s mother or sister, she’s definitely a member of their family. Her appearance represents a sea change, both in their lives and in the world they preside over. The first major change since their parents left. We’ll see how each of them end up dealing with it.

This episode rewinds back to the beginning of Summer vacation, only this time tells it from Yu’s point of view. A fox directs him to a part-time job tutoring a smart but unsociable boy, which leads to a job assisting with daycare, in which he accidentally breaks a $800 mecha toy he must then pay for. He also takes an mugged elderly woman to a hospital, where he meets a flirty but jaded nurse. He helps all of them in different ways, which explains all of the mysteries introduced in the last episode.

We were left last week with more “huh?s” than “ohs”, so we’re glad this second part explained everything that went on with Yu. It was quite a summer vacation, in which he touched the lives of numerous people for the better. Action, comedy, romance, drama…mom-on-mom smackdowns – all were on display in a very dense and bustling episode. As long as you’re okay with the fact this two-parter had next to nothing to do with Persona and could have been a part of any slice-of-life non-fantasy anime series, it was very well done. It all holds together brilliantly, and even if a few details are a little absurd, they were fun rather than dubious.

This episode didn’t forget about anything that happened last week, and wove all of the storylines he creates as summer progresses with surprising deftness. Every person he meets and who and what they are matters, and none of it would have worked without him knowing them. But on top of all this excellent weaving is the conclusion that all of this was a means for the fox to replace the umbrella Nanako lent him, which was destroyed by wind and a truck. The Fox met Yu, got him to take the job, and everything was set in motion. This was definitely a case of the means being more entertaining than the ends we saw last week.