When Ushio materializes beside Shinpei, she pounces on a confused Hizuru. Nezu prepares to aim his rifle at Ushio, but Shin asks him to stand down. Then Ushio takes Hizuru’s hand, sees everything she’s seen, and knows that even though she’s a Shadow, Ushio is their ally.

She’s always been their ally, ever since she printed the looping eye and brought Shin to the island. And since she’s a novelist, she’ll consider the incredible credible, and the unreal real. Shin believes their worst mistake last loop was splitting up, and having heard she died, Hizuru concurs. 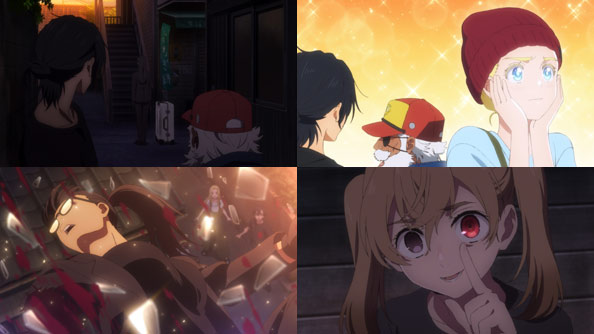 They head to the Kobayakawa home just like before, only this time they have Ushio, and after Haine tried to corrupt her, she now believes she has the ability to erase a Shadow if she wants to. Since Shiori is Haine’s way of moving about outside the cave, she’s hoping erasing Shiori will eliminate that way at worst, and destroy Haine at best.

Hizuru cedes control to Ryuunosuke, who heads into the house…and gets their ass handed to them. The “four-armed one” smashes Hizuru’s head in with her own sledge, and Haine!Shiori reveals that thanks to the brand on Shinpei’s arm, whenever he shows up in a new loop, she can find him “lickety-split”.

With Hizuru already dead and Nezu following shortly thereafter, it looks very bad for our heroes. Then the four-armed one wraps those arms around Shinpei, and PreCure Ushio swoops in and beheads him with her hair. So ends the fifth loop; we hardly knew ye! In the timeless corridor between loops, Shinpei thanks Ushio (in wristwatch form) for her quick thinking.

He laments how he let his naivete get Hizuru and Nezu killed so quickly and let another loop go to waste…but there’s no time for sulking. Ushio reports that when she tried to scan four-arms she found no data, but he “smelled” like Haine. She also believes Haine is using the brand to pull her along with him through the loops.

Both agree that in the next loop they’ll have to be a lot smarter and more careful, since they no longer have much of the element of surprise. But to their surprise, they appear not on the 22nd as usual, but in front of their family restaurant, in the rain. Two students walk past—the twins Hizuru and Ryuunosuke.

Shinpei follows them inside with Watch!Ushio and learn that this is most definitely the past; back when the restaurant was celebrating ten years, and both of Shinpei’s marine archaeologist parents were still alive. Hizuru tells Asako and Ryuu that she’s met a friend…up at the clinic on the mountain.

Shinpei/Ushio follow the three (he’s not visible to anyone in this projection, which is one of Hizuru’s memories), and when Hizuru’s friend doesn’t appear, Ryuu and Asako split. Then the light in the window comes on as usual, and Haine (with two identical red eyes) greets Hizuru.

I thought we were going to spend some time in the fifth loop, but it’s smart for the second cour to subvert expectations and up the ante when it comes to the dangers Shinpei and his family and friends face as they continue to meddle. Even more ominous, Sou’s dick of a dad is aware of Shinpei and Hizuru snooping around where they shouldn’t, and also knows Ushio’s shadow is causing trouble.

P.S., The new OP is…fine, and I even find myself not skipping it for future episodes, but it’s no first cour OP, which really captured the heat and bittersweet longing of summer. This new theme (and the ED, for that matter) sound a lot more generic.