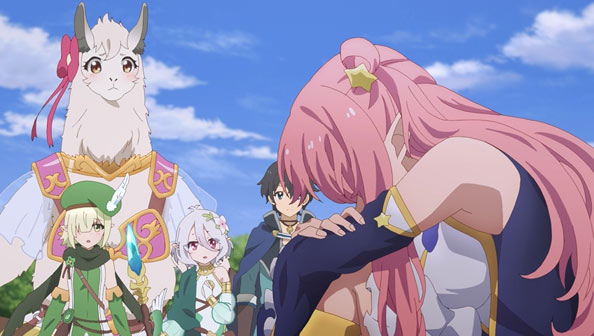 When a battered Elizabeth Park arrives in Targum without Shiorin, her sister Hatsune leads a search party consisting of Yuuki, Kokkoro, Rima and Aoi. When Hatsune uses her flight ability  to get a better look at the forest, she is attacked from the ground by Shiorin, whose body has been taken over by one of the creepy “Shadows”.

Suddenly our fantasy culinary slice-of-life comedy has become a serious action drama…and that turns out not to be a bad thing at all. How crazy is that?! 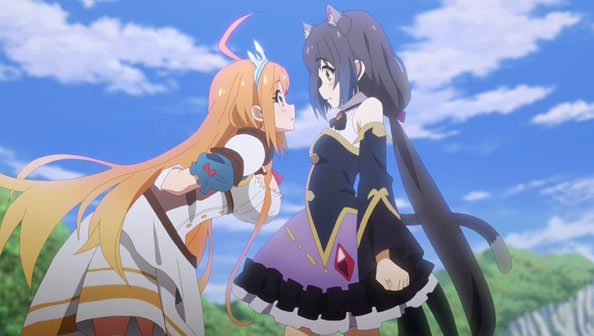 Back in the village, Karyl wandered off by herself when Yuuki and Kokkoro left with Hatsune. She knows all about the Shadows, since her mistress is behind them. This awakens Karyl’s split loyalties, and her inner conflict is further exacerbated when Pecorine tracks her down.

Peco sensed Karyl was feeling down despite the fact Karyl herself thinks she always looks the same. Peco may be an airhead, but she’s got emotional intelligence in spades, and is now good enough friends to know when Karyl is troubled.

Hatsune’s search party is suddenly attacked by Christina, who is excited for this “new act” and wants to have some fun. Despite outnumbering her 5-to-1, the party isn’t able to put a dent in her, thanks to her ability to phase out of solid form, which is almost cheating!

Then she KO’s Yuuki, who wakes up back at his starting point, where the oracle-like guide reminds him only he has the “Princess Knight” power to save the others. He wakes up, buffs his fellow party members, and together they fight Christina until she’s satisfied enough to withdraw for the time being. 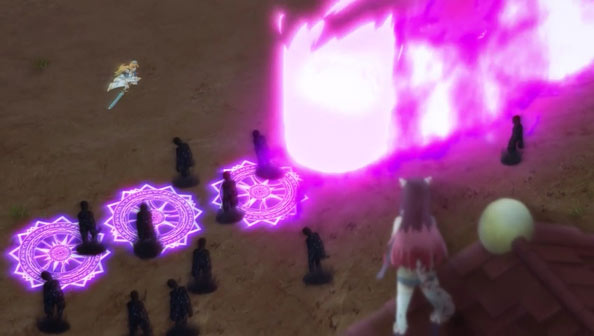 As they’re fighting out in the wild, Peco finds herself the only line of defense against an army of Shadows attacking the village, led by Dark Shiorin. She doesn’t have much trouble with individual Shadows, but there are dozens of them, and she didn’t eat a big enough breakfast, so she starts to become fatigued.

After a period of passively observing (as is her mission), Karyl decides to pick a side and back Peco up with her powerful conjuring magic. Hatsune’s party returns, and Hatsune uses her “mild-meld” ability to enter Shiorin’s unconscious, where her true self is being held captive. 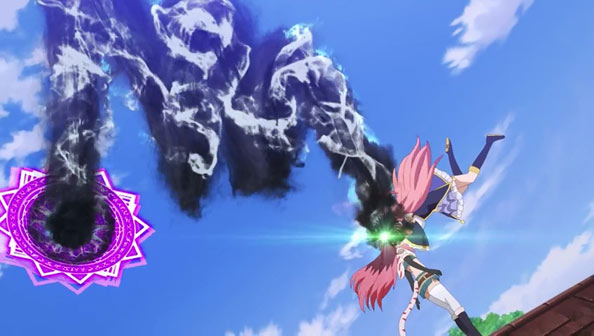 However, Shiorin is being held captive as much by her own fear of being a burden to her sister than she is by the Shadow. Hatsune doesn’t want to hear such nonsense, and snaps her sister out of her pity party, holding her arm steady as she fires an Enchanted Arrow at the Shadow.

Meanwhile, Karyl conjures a vortex to suck up the weakened Shadow, and Pecorine delivers a Princess Strike coup-de-grace to secure a complete victory for the good guys. Shiorin is herself again, no one is the worse for wear, and Yuuki is now aware of the power surging within him.

Still, while Yuuki’s role this week was important, the heart of the episode was the pairs of Hatsune/Shiorin and Pecorine/Karyl. At no point did Pecorine call out for Karyl’s help or wonder where she was when she was wavering. Both that confidence in her comrade and ability to sense when she’s troubled ultimately spurred Karyl to Do the Right Thing.

That said, this is the latest of many times she’s gone far beyond her observation mandate. There may be consequences in store for her should her mistress find out how much she’s helping her target. But perhaps Karyl is finally starting to realize she won’t have to face those consequences alone: those whom she sided with care about her and will have her back come what may.

With a briskly moving, exciting episode that brought darker themes to the forefront, PriConne reached a new high. Sure, it’s arguable whether so many characters were required to tell this story (it’s fun having Rima and Aoi around but they weren’t all that integral), but they’re all fun, likable characters, and splitting the Gourmet Guild paid big dividends. 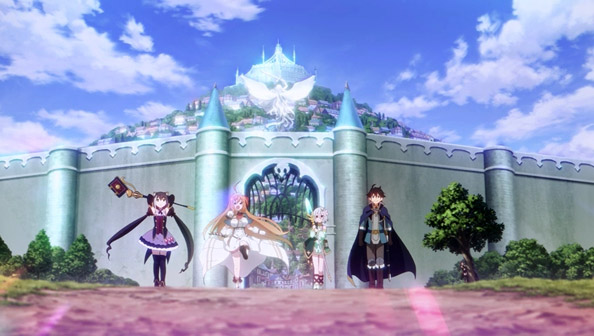 After Karyl returns “30% better” (and a certain additional % traumatized) the Gourmet Guild departs from the big city for their first real quest. They’re headed to a village called Targum to harvest a treasured spice of the same name. There’s a palpable sense of adventure and occasion to leaving the walls of the city thanks to the heroic direction and stirring overworld score. 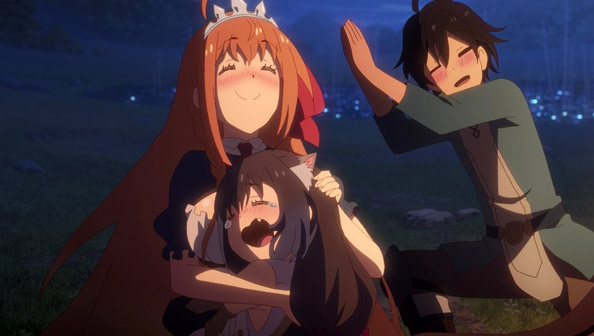 When they make camp for the night and Karyl is unsuccessful in catching any fish in the “useless” lake, she dreads a supper of bugs or frogs. Pecorine comes to the rescue with a plump fowl she caught in the forest, and slow-cooks in a pit for maximum juiciness. She also found some sweet ripe fruits, one of which Kokkoro is about to eat when the other three start acting drunk. Unsurprisingly, Pecorine isn’t that different drunk, while Karyl is sloppier and more sentimental.

The next day while everyone’s guard is down, Yuuki is suddenly captured by a mischievous behemoth, but he’s rescued by a forest elf archer named Aoi, who is a self-professed “lonely soul” so desperate for friends she made one out of a small log. Hanazawa Kana provides the voice for both Aoi and her woody friend, whose bizarre antics and monologuing even make Yuuki a little weirded out.

The others eventually find Yuuki, and Aoi leads the guild to Targum, where they meet Misato, who along with her sister and Hatsune form the group called Forestier. She’s glad for the spice harvesting help, and announces that a third group, Elizabeth Park (to which llama-girl Rima belongs) is also on their way to the village. The Gourmets eventually encounter the eccentric Hatsune sleep-flying…a term I didn’t know I needed in my life until I witnessed it! 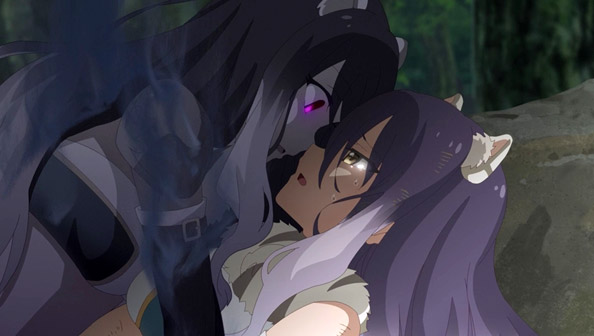 Unfortunately, Elizabeth Park encounters a lot more trouble than a Yuuki-glomping behemoth. Rima and her three comrades (including Hatsune’s ill sister Shiori) encounter strange “dark doppelgangers” of themselves (just like a woodsman did earlier in the episode). Liz-Park proceeds to fight them to a stalemate until a powerful warrior named Christina blasts the foes away and challenges them to a fight.

Shiori is separated from the others, and her dark double returns and appears to consume her in a ball of dark energy, leaving no trace. Even though I’ve just met Shiori (and her very extra sister), her fate represents the most genuine unknown peril we’ve seen befall someone. I imagine spice harvesting won’t be at the top of Forestier’s list of priorities next week…they’ve got a sister to save!