Just as Shalsha and Falfa are reading about the Elves of Hrant, one arrives at the door in a state of anxiety, demanding to be let in.

Her name is Halkara, and she’s a very successful apothecary and energy drink entrepreneur who happened to make a demon named Beelzebub mad when that drink caused an adverse effect. She also has a killer bod!

While her extra witch outfit is far too tight for Halkara’s three sizes, Azusa agrees to keep the elf under her protection, casting a barrier over the house and inviting the elf to join her foraging for medicinal herbs.

Azusa ends up learning a lot about the mushrooms of the forest, as well as the existence of a condiment very much like soy sauce. Halkara also accidentally eats an aphrodisiac mushroom (due to poor sorting methods) and starts involuntarily making advances on Azusa, who isn’t interested in a drug-addled tryst! 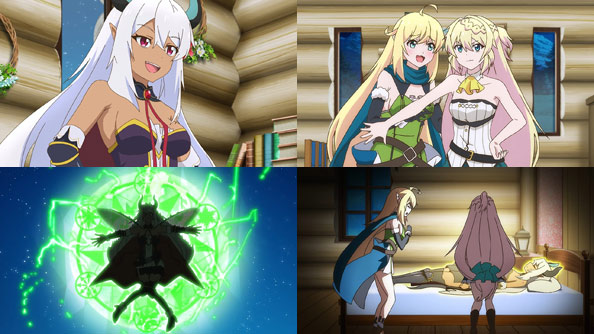 Halkara eventually recovers, and the matter is not spoken of. Then they find that there’s a huge reward poster at the guild for anyone who can locate Halkara. Azusa preps for a potential confrontation by having Laika take her daughters to safety, but Beelzebub was there all along in the form of a bee.

Beelzebub attempts to seize Halkara, abut Azusa won’t hear of it, and the two agree to take it outside and settle it with a fair fight. Beelzebub immediately makes use of her ability to fly, but ends up hitting the inside of the barrier and gets zapped. Azusa takes her in and heals her with magic. 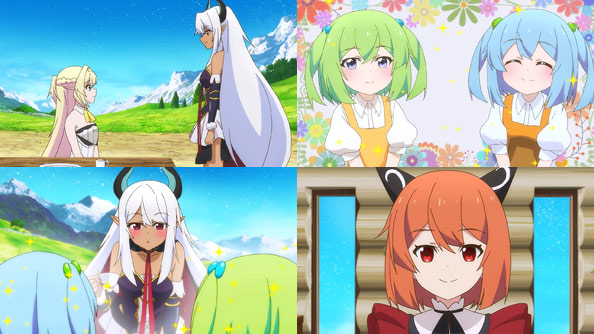 After recovering, Beelzebub reveals that it wasn’t Halkara’s energy drink that made her sick, but overwork. She and the other demons actually love her product and only came to meet her in person and procure more. With the misunderstanding cleared up, Laika and the kids return.

Beelzebub still wants to have that fair fight sometime, while Halkara wants to move her production to Azusa’s province for tax purposes, so Azusa’s family swells by two. Her peaceful life is as lively and fun as ever, but the episode ends on a cliffhanger as Laika declares she’ll be returning to her own home.

This week’s Food Wars leaves the confines of the school for an elaborate “training camp”, held on the premises of Totsuki’s famed (and very highly-priced) resorts. Isshiki warns his juniors that the purpose of the camp is to thin the herd; in some cases half of the students who participate end up on the expulsion block. 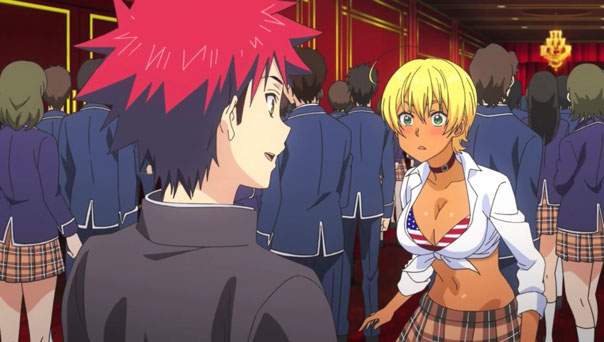 Predictably, Megumi’s a nervous wreck, while Souma is perfectly relaxed, as he even calls out to “Nikumi” (a nickname he’s decided to use and she’ll just have to accept it) fresh off his victory over her. While I hope not every girl he beats gets the hots for him, I do like how nicely her haughtiness has been neutralized.

Once at the resort, the students learn their various camp tasks will be judged by Totsuki alumni, all of whom went through this themselves and survived to graduation, and celebrity restaurateurs, who will be treating the students no differently than they treat their staff. If they’re no up to snuff, boom expelled. One judge makes their meaning plain by kicking out a kid just for having scented hair product.

She’s paired with Souma again, to her sweet relief this time. The first time she thought she’d paired with a troublemaker who was all talk; but now she and many others know differently: he’s a troublemaker who is more than all talk. In fact, most of the talk is directed at him from one Takumi Aldini, who along with his fraternal twin bro Isumi, work at their family trattoria in Italy. Like Souma, he’s already a pro who’s served and satisfied thousands of customers.

On top of their alumni judge Inui Hinako (a bubbly yet ruthless Noto Mamiko)’s challenge that they forage the resort grounds for the ingredients needed to create a Japanese-style dish, Takumi makes it a battle between him and Souma, with Inui deciding who’s best. In a nice character moment, Inui refuses, leaving Takumi stranded on his high horse, with even his own bro laughing at him. I like how everyone on the show is aware of Takumi’s overzealousness, as if he knows he’s in a shounen battle anime.

He may be fiery, but he and Asumi are also one hell of a team, being the only students to find a duck, then perfectly timing their work to finish first with a Japanese-Italian fusion dish that makes Inui imagine herself in a Pavarotti-like opera singer’s arms as he serenades her while wearing a duck hat of sorts, in another bizarre foodgasm.

Nikumi fell into a trap of “the best ingredients always win, period” and got clobbered by Souma, but these Aldini boys are a lot sharper and scrappier. The more limits you impose on them, the more creative and amazing the food they dish out. They’re a lot more on Souma’s level. On top of that, the brothers operate like a well-oiled machine, an efficiency we haven’t yet seen with Souma and Megumi.

Not only does Souma have to use river fish—the same thing everyone else is using—but he also has to properly coordinate its preparation with Megumi in the time remaining. Hopefully they Aldinis don’t try to sabotage them on top of all that, because their hill is steep enough as it is. Will Souma be able to turn Takumi’s loathing into grudging respect? I suspect so. What I look forward to is watching how.