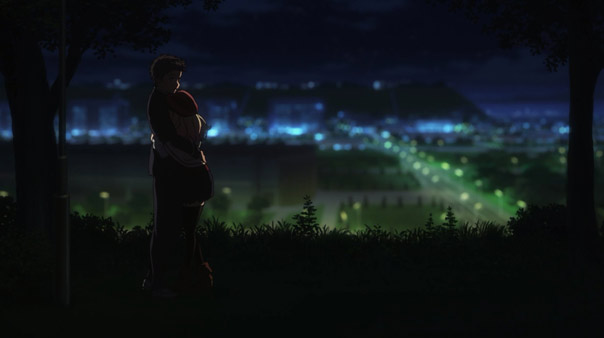 Rather than move on to the next treasure-of-the-week, Nanana sticks to the matter at hand—the fact that Juugo isn’t going to let Yuiga get away with his treachery. In the process, we get a lot more pieces to the puzzle that is Yama Juugo, beyond a blandish kid who decided to strike out on his own out of mere restlessness. Turns out he was exiled! We’re startin’ to like this kid.

When Juugo meets with Tensai at the agreed-upon spot, she notices Juugo is slightly taller, and exposes an impostor belonging to the e-lite thievin’ group Matsuri who claims to have kidnapped her new pardner. But in reality, Juugo is the son of Matsuri’s leader, and it’s once-presumptive heir. The show kept its cards close to its chest last week, but those weird cops were an early hint at what was to come.

I must say I was impressed with how elegantly the show managed to uncover all these new truths about Juugo, while keeping him true to the person we had known thus far. He’s still a tank of a feller, able to withstand all the Wizard Cane attacks Yuiga can throw at him until it runs out of juice. I was also surprised and delighted by Ibara and Yukihime’s mad fighting skills.

I was impressed by the first puzzle dungeon the adventure club faced, but I’m even more impressed at the show’s ability to change gears to something more complex and nuanced. The fact that essentially everything that transpired this week was all part of Juugo’s plan, even counting on Tensai to bring in the cavalry, and used his stature within Matsuri, but only so far.

But even better is the fact that Tensai figured it all out, which even impresses Juugo. Tensai and Yuiga’s crazy dreams irks him because he can’t feel the same way, nor does he have as defined a goal. He also seems to have trouble with people. His haughty dad who exiled him is quick to mock him on both counts. But with his growing respect for Tensai and the goal Nanana has assigned him, Juugo may be in the right place to find out what he’s meant to do.

As a ghost Nanana remains resolutely neutral, not even telling Juugo where any of her treasures are, because what would be the point of that? Also, the episodes would only need to be three minutes long, because they’d consist merely of Nanana telling Juugo and Tensai exactly where each treasure is and how to get to it. The experiences had while searching for a treasure are as important as the treasure itself.

Last week we got a taste of what it takes to get to a treasure in the test that Juugo and Tensai take, in which Juugo’s stamina and toughness helped Tensai work out the system. This week we get an official “Ruin”, which Tensai discovers by observing the peculiar construction of the hexagonal mall tower perched 1000m above ground. What they find inside is yet another elaborate CGI setpiece of a very cool labyrinth. It actually reminded me of the Great Crystal dungeon or any other number of tricky video game mazes.

When the puzzle is first robotically constructed, it could well have tipped the master detective Tensai off as to its solution. The translucent maze is built from some kind of rigid foam, chunks of which are cut away and subsequently rebuilt in a specific order. The sound effects are great. When Yuiga warns them that they’ll be risking their lives, and Tensai keeps almost falling down a yawning abyss to her death, it had my full attention.

Precise study is required to fully devine the pattern, but Tensai succeeds, and leaves the gruntwork to Juugo once again; I must say they make a great team. Things took a definite turn for the sinister when Yuiga suddenly betrays them, grabbing the treasure—a wizard’s staff that grants its user practically anything—for himself and leaving Juugo and Tensai behind. What an ass! But I have to admit he had me totally fooled that he wasn’t right up to the moment I learned he was.

The consequences turn out to be less severe and mortal as I thought though, as Juugo and Tensai simply have to keep from falling off the treasure chest floating in midair until the police arrive. It’s an cute scene between the two, being forced to hug. Interestingly the lady cops turn out to be dirty, stripping and beating Juugo, but he buys time for Tensai to track down Yuiga, who’s apparently just an errand boy of the head of the Great 7, suggesting this is about more than harmless fun and memories.