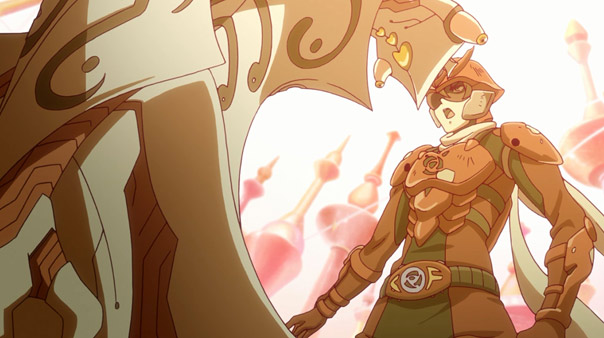 Well now, that was pretty damn weird. Dealing with the fairly lame Alien Flamenco, thought to be the next great menace to world peace, was only a one-episode exercise, in which Samurai Flamenco attains new heights of ridiculousness. It aims to fit all of the random stuff that has happened to Masayoshi and Co. up to now into one grand unifying theory of bullshit, and it doesn’t quite pull it off.

In its haste to explain the connections between all of Flamenco’s increasingly strange battles, it inflates Masayoshi to an undesirable god-like status, or at least to the level of a messiah-like instrument of God. Saying the “will of the universe” sent enemy after enemy to Masayoshi because he wished for them is tidy and all, but ultimately not very satisfying. It was all a bit silly, frankly. 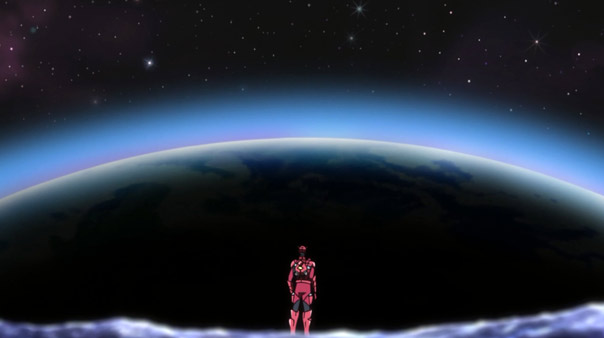 While it tries to come off as a “Ha-ha, we’re in on the joke” silly, we got more of a “Meh, we’ll just make it up as we go along” vibe, which can be fine, but it’s harder than it looks. Even if this was all planned from the start, the answers we get this week just weren’t worth all of the whiplash of the past escalations. It’s a nonchalant, overly-meta resolution that does a disservice to the other characters who sweated and bled and cried and struggled by his side all this time. Like the big From Beyond battle, this just wasn’t as clever or ironic as it thought it was.

Take away the window-dressing of the “illusions” and the brief and fairly plain space battle, and this was nothing but Masayoshi standing around talking with a robot who’d finish sentences in English for no reason, followed by somebody who may as well be God, taking the form of Masayoshi’s friends and enemies. But hey, at least he makes what we thought was the right decision: to stop the flow of goofy villains and return to normal life on Earth.