Rista quite suddenly learns through Aria that Seiya may be in grave danger, as the archery goddess Mitis was exiled to the forest because she’s a nymphomaniac who preys on human men. When she, Mash and Eruru arrive, however, Seiya already has the situation well in hand.

Not only does he decline her taboo offer to copulate like there’s no tomorrow, but he’s able to deliver a five-arrow attack that “satisfies” her anyway. And so Mitis joins SAOA’s Administrator as the second woman antagonist in recent memory to fight a battle while buck naked.

Now that Seiya is perfectly prepared to fight Beel Bub, Cautious Hero takes to the skies, where the bugman has already taken Roselie hostage after she recklessly demanded a fair fight from him. Seiya calls upon Rista to provide a diversion so he can snipe Bub, as well as catch Rose when Bub drops her.

The aerial setting is a nice change of pace for a show that’s already had boss fights on fields and in caves, and as Rista says (or rather is told to say by Seiya), it is a really nice day—especially above the clouds!

After Bub is defeated, Roselie naturally doesn’t show the slightest bit of gratitude, while Seiya is content to “let the dog bark,” as it were. This time, Rose is able to control her temper, and tells him about the sacred legendary armor located in the vilage of Izale.

Seiya assumes it’s sacred legendary cursed armor, but the party heads to Izale to find it anyway, hoping to rest after two consecutive tough battles. What they find instead is an Izale in flames and the armor destroyed by an Adamantoise summoned by the third of the Heavenly Kings, Kilkapul, who has been watching Seiya and is confident he can put him down for good. 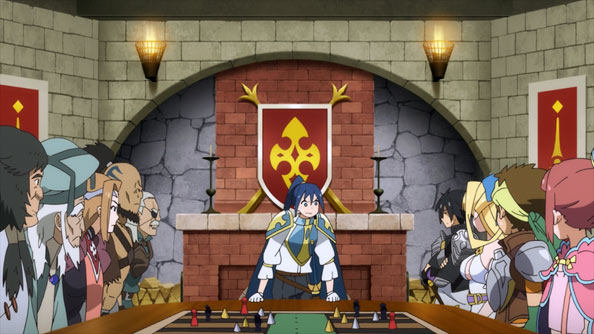 Rista, Eruru and Mash may be used to Seiya’s overcautiousness and boorish manner, but every time he meets someone new, the goddess has to apologize for him all over again. Enter Roselie, general and heiress to the throne. Having just lost over a hundred of her soldiers to the plague of giant flies led by Beeb Bub menacing her fortress, Roselie wants to make their war council as brief as possible before she and the Hero rush right back into battle.

Needless to say, Seiya ain’t having it. He wants to return to the realm of the gods to train for three days, which while only an hour in Gaeabrande time, still feels like cowardice to Roselie, who is always about rushing forward. The two diametrically opposed personalities quickly clash, and when Seiya inevitably says something worth slapping him for, Roselie’s slap is blocked and she’s slapped right back…several times!

The one-sided exchange leaves her a swollen, blubbering, growling mess, but Seiya won’t apologize for defending himself. And he’s right that Roselie is responsible for the lives of the soldiers she so recklessly sent out without any kind of preparation. It’s just hard to side with Seiya when he’s so brusque and rough with a young woman.

Seiya gets his wish, of course, and when he learns there’s no god of Patriot missles or guns, he seeks out the next best thing: Mitis, goddess of archery. She agrees to teach him the skill that will enable him to launch a number of arrows in quick succession (she says seven is her max, but I doubt he has a max), and for good measure, he learns Eruru’s Fire Arrow in a matter of moments, sending her into a spiral of self-pity and candy-eating.

While it’s hard to compare with Roselie, who got the shit slapped out of her for rightly losing her temper in the face of Seiya’s insufferable attitude, one can’t sleep on the psychological damage he did to Adenela, who wasn’t that right in the head to begin with. When Rista pops by she sees Adenela’s walls covered in “I’LL KILL HIM.”

And yet, when Adenela follows Rista back to Seiya and draws her Eternal Sword to run him through, it is Adenela who is charmed anew into forgiving him without conditions, even as he criticizes her hair and tells her her presence is upsetting so could she please buzz off? Having fallen right back in love with him, Adenela leaves, but judging from her apple-licking, there’s something off about Mitis, which no doubt Seiya will be able to deal with.