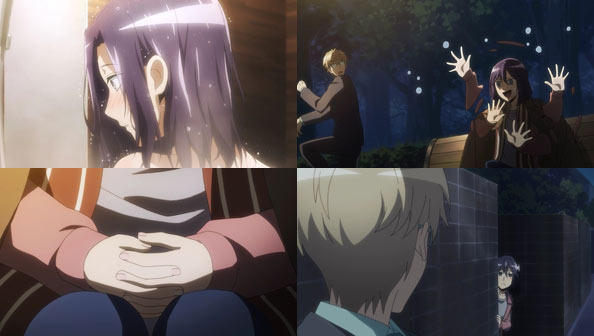 The penultimate NjS‘ cold open has a hell of a hook: Morioka taking a shower in Sakurai’s apartment! It’s safe to assume the episode to follow would tell the story of how such a seismic development in their relationship (“level up” in MMO terms) occurred. It’s also safe to assume that there’s nothing untoward going on; the two were caught in the rain and his place was closer seems about right.

But first, we go back to the aftermath of Sakurai’s confession that he’s both Lily and Harth, knows Morioka is Hayashi, and has been her beloved confidant and partner under her nose. At first, the news seems to break Morioka—it’s a lot to process, and her “CPU” overloads. She comes out of it to ask him when he first knew; he suspected when they started talking more in-game, but their “first date” was the confirmation.

In her head, Morioka is happy Sakurai rushed to her, lamenting how she might not have done the same, as she’s be so worried about upsetting the apple cart. The two have taken their next step, but neither has any idea how to proceed, nor are they remotely on the same page.

To whit: when Morioka tells Sakurai she wants them to “keep being good online friends”, she says it believing that’s all Sakurai will ever want, while Sakurai considers it a rejection—that she only wants to be good online friends and nothing else. Both are misunderstanding a great many things. 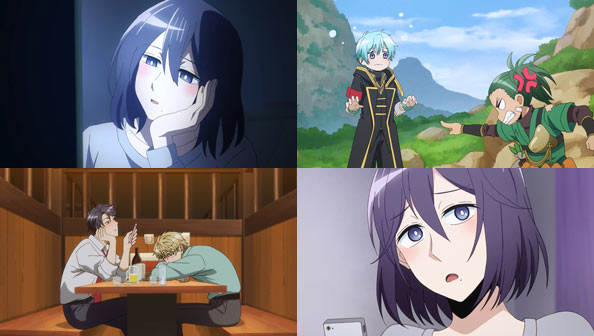 Sakurai’s belief he’s struck out is a weight that replaces the weight he just got off his shoulders with his confession, and he makes matters worse by not going online, leaving Morioka feeling lonely and unfocused in the MMO, as well as free to incorrectly interpret his motives.

Koiwai can totally deduce why Sakurai gets so uncharacteristically drunk on night, can reasonably conclude he’s misinterpreting things, and texts Morioka, asking if they can meet and talk something over. 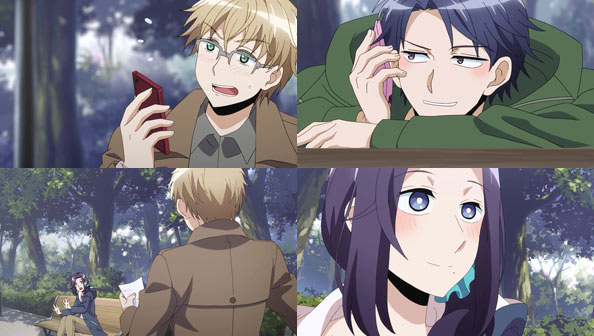 That something is Sakurai, but Morioka never meets Koiwai in the park. Koiwai summons Sakurai into the park so he and Morioka meet. And that’s all he really has to do (though I wish he’d delete that photo of Morioka sleeping…that’s not cool, man!).

I’ve been up and down with Koiwai, but I never should have had any doubt that he’s a true and loyal friend to Sakurai and that Morioka’s a much better match for his blonde-haired friend…if only they could get together and relax…which he makes happen. 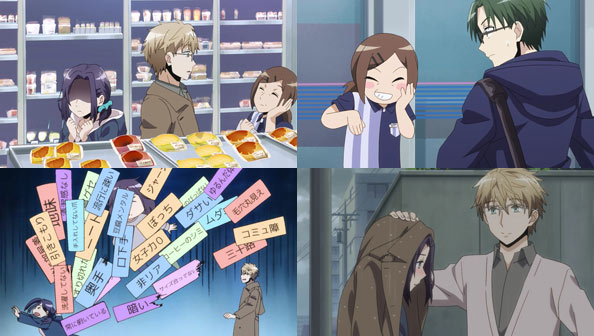 They relax, that is, until they go to the convenience store together and Morioka, already worried she looks like shit, gets even more self-conscious when the shopkeeper asks Sakurai if she’s his girlfriend, to the point of running off as the clouds gather. She believes, of course, that the shopkeeper meant “there’s no way she’s your girlfriend, right?” She was teasing, not condemning!

Sakurai chases her down, and after hearing her lay into herself and apologize for being seen with him, Sakurai sets the record straight: he doesn’t think like that at all. Then those clouds open up, he uses his coat to keep her dry(ish) and suggests they go to his place, which is just nearby, dry off, and he’ll cook some lunch. 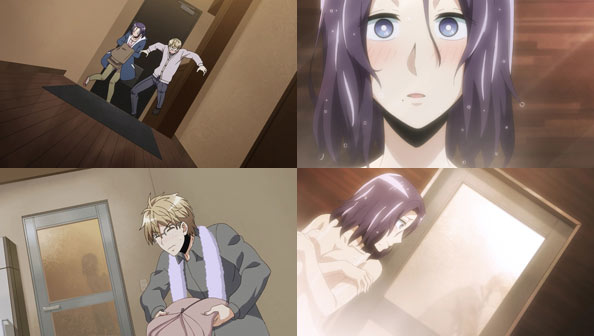 Sakurai didn’t think, he just suggested this…and Morioka doesn’t think, she just agrees and comes up with him. As soon as they start thinking, she realizes she’s taking a shower, and he’s leaving out some of his clothes for her to change into. In other words, pretty boyfriend-girlfriend kinda stuff! I’m all for it. Hang in there, you crazy kids. Just one episode left! 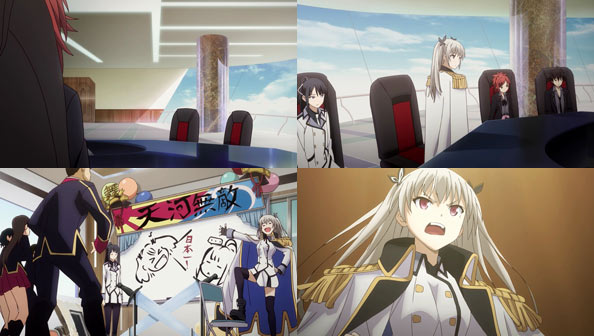 QC stuck to its guns b confirming Canaria is dead, as were all the other students who went through the no-entry zone. Ichiya is off in a cloud of grief, leaving Tokyo rudderless. Hime leads the way in stepping in to pick up the slack, initially putting forth policies intolerable enough that she hopes Ichiya’s own people convince him to come back. 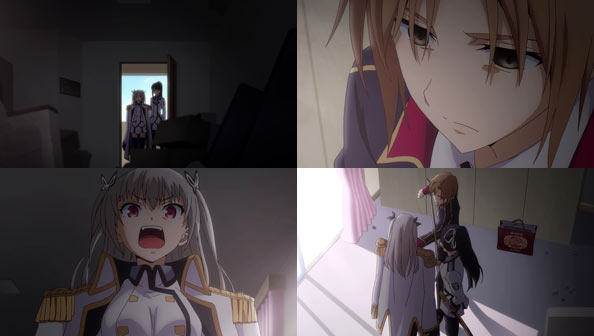 Hime shows a lot more depth this week, as more than simply the hyper overpowered princess we’ve seen her as so far. We see the true reason Hotaru cares for her so much. Ever since Hotaru saw Hime’s hands trembling as she told adults she was fine after her parent’s death, she knows when Hime is hiding her true emotions, which she must to in order to try to restore some semblage of morale in Tokyo. 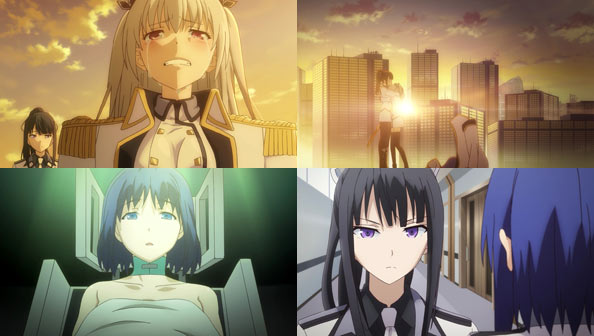 Unfortunately, neither the friendly nor the more hard-line tack do much good against the nearly catatonic Ichiya. She misjudges just how much Canaria meant to him by scolding him for “freezing every time one person dies.” Canaria wasn’t “one person”, she was the person to Ichiya. We also learn that one person managed to survive the post-no-entry purge: Aoi, but only because the adults took out her old Code and installed a new one, with very little explanation other than “you’ll be fine now.”

We know that going into the zone marked Canaria and the others for death by surprise Unknown attack. But we don’t know why, and the adults don’t want anyone else to know, either. That being said, Hotaru still wants answers, and if she can’t get them from the adults, she tries to lead Aoi back to the no-entry zone for clues, all but forcing her to explain why they simply cannot go back there. 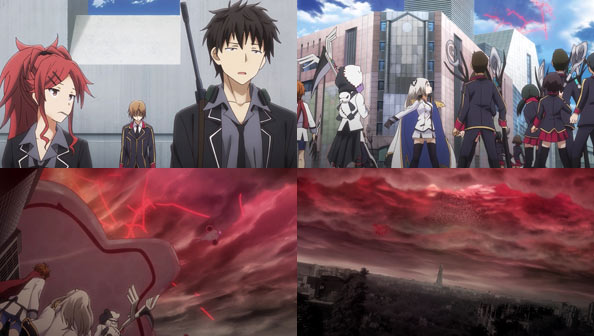 As expected, it’s Kasumi who manages to get Ichiya back out into the sunlight, but he’s still a zombie who doesn’t do anything other than grieve and lament his plight this week. This had the effect of giving the other heads and subheads more screen time, and while the Chigusa siblings were their usual half-bored selves, Hime and Hotaru shined.

QC is doing the right thing by keeping its cards close vis-a-vis the Unknown. Typically, the more details one learns about an initially mysterious/inscrutable villain or evil force, the less frightening they become, since there’s nothing scarier than the unknown.

The fact we still know very little about what the Unknown are and what motivates them adds to their creepy mystique, leads us to flex our imaginations searching for theories, and mitigates their uninspired designs.

But it’s inevitable we’re going to learn more about them, especially when the very sky turns red as the largest Unknown force yet amassed seems poised to wipe out the three cities once and for all (a great Oh Shit moment). I just hope we don’t learn more than we need, thus the threat become devalued. 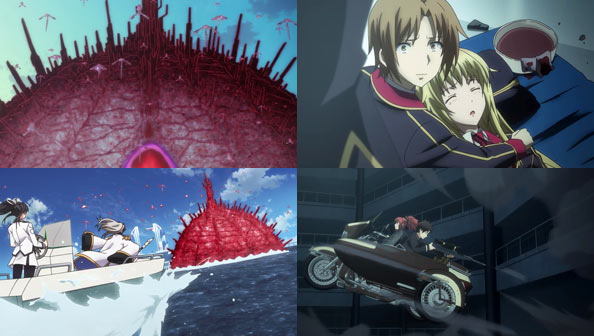 Indeed, while the turnabout in his personality was, uh, rapid, rapid change is possible in the midst of the person he cares more about than anyone else getting seriously hurt in a battle he instigated. 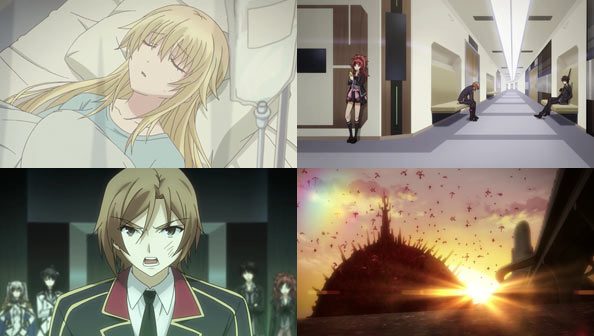 As the exterior peril intensifies, internal strife fades away for the good of the whole group. Thus Ichiya’s improved personality raises all boats, showing that when the going (finally) gets tough, he can count on his fellow heads and their subheads.

Ichiya presents this new-and-improved, common sense-armed self to the adult bosses, who endorse his plan to ally with Kanagawa and Chiba to defeat the Leviathan properly.

He’s learned his lesson, and hopefully retired his tired catchphrase “I’m all we need.” Clearly both he and they need more than just him; they need each other, working together. 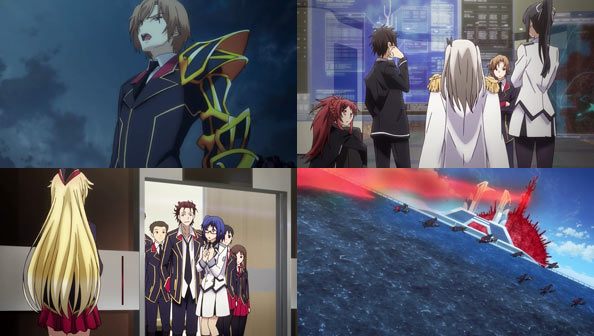 His new plan for attack is neither nonsensical nor reckless; it is actually pretty by-the-book and straightforward, with each city playing to its strengths in an effort to distract, misdirect, and get through the armor of the Unknown.

Ichiya also leaves Aoi in charge of keeping an eye on Cana, who wakes up shortly after he departs for battle. She immediately sits up and gets dressed to catch up with him, but while Aoi tries to stop her, her fellow Tokyo broom-riders suggest a shortcut and for Aoi to accompany them. 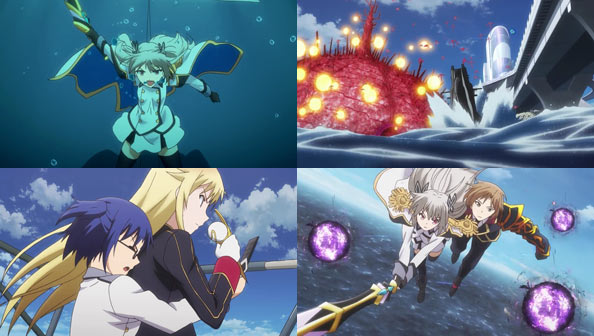 Kazumi uses explosives and something called “dead space” to suspend their assault train into a position from which the ground forces can attack, while Hime surfaces her submarine carrier right beside the enemy to deliver a blow that still isn’t quite enough.

Turns out, the five fighting the battle can’t defeat the Leviathan without their sixth, Canaria, who comes in singing and buffing everyone around her. Realizing he’s stronger with everyone than all alone, Ichiya scoops up Hime and flies her to the spot she needs to get to to take out the Leviathan. 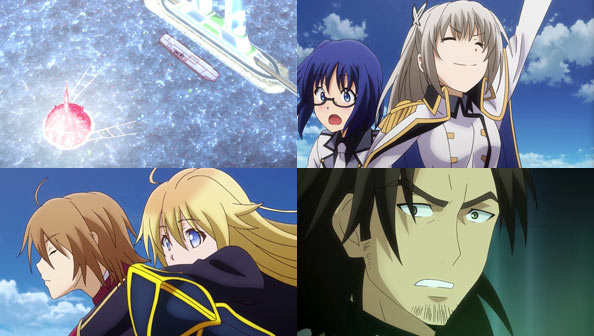 Remember what I said about QC being flawed? Well, while the peril is nicely pitched and the characters have gotten more interesting…the animation during the climax of the battle stinks, with the frame-rate dropping until it’s just a Powerpoint deck of still shots.

The show tries to pass this off as a “slowing of time” effect for enhanced drama, but actually has the opposite effect since at the end of the day, things weren’t really animated at a crucial part of the episode. The result was underwhelming and sloppy.

However, the episode makes up for that a bit with the aftermath, when Ichiya takes Cana back the hospital on his back and everyone celebrates a great victory….only for tragedy to suddenly, unexpectedly strike once more. 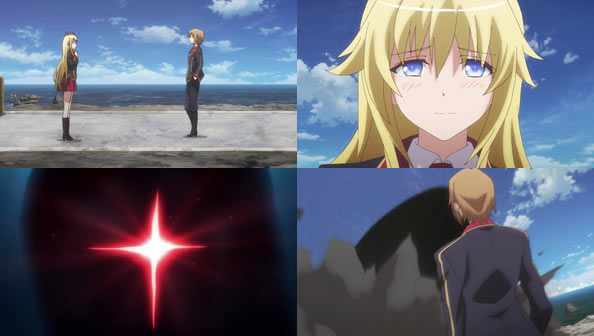 A post-credits scene with Ichiya and Cana has all the makings of a quiet epilogue to close the episode out, but for Asanagi’s shocked, pained reactions to seeing something on Aoi’s neck, indicating she, Cana, and the others who broke Cana out of the hospital went through a “no-entry zone.” We also see flashing red lights in the ocean, and one of those foreboding seagulls gets killed in the sky.

Just as Ichiya is telling Canaria he’s asking for a demotion that would swap their ranks, making her head, and telling her how he doesn’t care about anyone in the world as much as her, a huge mass falls out of the sky and smites Canaria. One moment, she’s there smiling, the next, a perfectly circular hole in the ground, and a spot of blood in the water.

I’m not sure exactly what happened here, and it surely adds to the mystery of what the adults aren’t telling the kids. But whatever we learn or however Ichiya deals, killing off a likable main character in the fourth episode is a bold move.