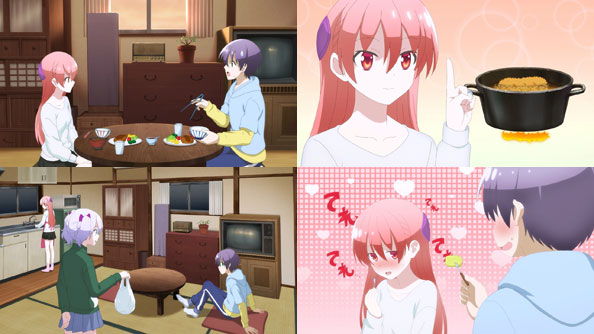 This week we get four more cozy, sweet, heartwarming, adorable, feel-good slice-of-life segments with Nasa, Tsukasa, and the Arisugawas. Tonikawa has long since established itself as a wonderfully earnest crowd-pleasing show, and continues to not let me down!

Fry, Don’t Buy—Nasa and Tsukasa’s temporary new home was previously used to store all of Kaname and Aya’s dad’s “nerd crap”, but the couple is welcome to whatever useful items they find. The result is a thoroughly “old-fashioned” living space complete with huge CRT TV.

Tsukasa prepares tonkatsu for dinner, a favorite of mine, and Nasa is again shocked and impressed by his wife’s culinary skill. Nasa’s a super-utilitarian person, and was raised with rice cookers and a “buy-not-fry” mentality, but Tsukasa shows him the rewards of an honestly home-cooked meal. Nasa, in turn, feeds Tsukasa some delicious melon for dessert.

A Model Home—A favorable update to their living sitch, his landlord is rebuilding and they’re welcome to move back in with the same rent and no deposit. They even arranged a model room for Nasa and Tsukasa to inspect before making a decision, and they are surprised to find it’s an ultra-luxurious apartment with a bird’s-eye-view of the city.

Tsukasa sits in the huge bathtub with a view and the two get red-cheeked over the prospect of sharing a big bed together, but in the back of their heads they’re always wondering if this was really meant to be the model room for them to look at. Turns out it isn’t—their landlord made an error—but the couple isn’t disheartened. Big or small, new or old, home for Tsukasa will be wherever Nasa is. He feels the same way. 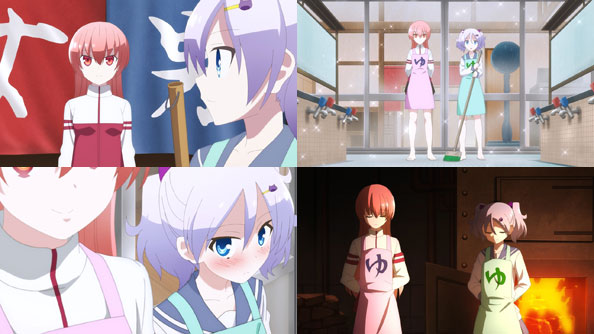 Helping out at the Bath—Kaname opens this segment, going over her morning routine of getting up at 5:30 to clean and prepare the bath for customers before heading to school. Tsukasa offers her services as thanks for her continuing kindness and hospitality, and shows she’s just as highly competent at cleaning as cooking.

In cleaning the entire men’s side of the baths, Tsukasa comes to admire Kaname for the hard work she does every day. Kaname comes to understand why Nasa loves her, and they adopt informal nicknames and by morning’s end are officially friends. Aya, on the other hand, laments the prospect of being shunted off to a spin-off.

An Evening Stroll—After Nasa declares after thorough mathematical analysis that his favorite food is curry, he and Tsukasa head to the store to buy some curry powder and decide to make an evening stroll of it. A cheeky Kaname and Aya’s mom tells Nasa about a nice quiet secluded park where he can make out with Tsukasa, adding some spice to their marriage after buying spice.

Ultimately, Tsukasa declines Nasa’s offer to kiss, since they both just ate garlicky steamed buns from the store. Nasa doesn’t care (and indeed most people who love each other don’t really care about mildly bad breath) but she’s self-conscious about it. So instead, Nasa suddenly embraces Tsukasa from behind, both surprising and exciting her.

He asks her how her married life is going so far, and she remarks on how many firsts she’s experienced with him and will continue to experience—among those being the intimate position they’re currently in. She looks forward to experiencing more firsts with him, and Nasa doubtlessly feels likewise.