Like many highly anticipated anime I know next to nothing about and intentionally try not to learn ahead of time, I was very excited about going to see Guardians of the Galaxy. I had a feeling it was going to shake up the monotony of the last few Summer blockbusters I’d paid good money to see, and boy, did it ever.

Yes, this film crammed a bunch of shit on the screen, and yes, since this is the first time the director has done anything this huge before, it isn’t all perfect, but GotG has in spades what so many films—including other Marvel films—have lacked: genuine heart, soul, wonder, and side-splitting comedy in impressive harmony. 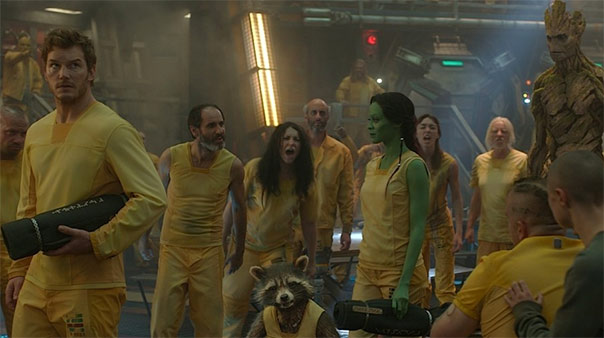 Franchises in the same vein as GotG I’ve cherished, like Farscape and Firefly, put out (relatively) big-budget cinematic romps in The Peacekeeper Wars and Serenity, respectively. But those efforts failed to capture the magic of the TV shows they were based upon, and only served to remind me how how difficult it is to capture said magic.

GotG isn’t hamstrung by a deep and acclaimed canon (at least for me) or abrupt television cancellation, so it feels new and fresh. It has no past failure it tries desperately to redeem here, so it never feels like it’s trying too hard. But it takes some of the best qualities of Farscape (human pop culture in an utterly alien universe), Firefly (cleverly juxtaposed genres).

The band of underdog misfits becoming the family they all lacked before they met each other is not a new premise, but it’s executed pretty damn nicely here, because for all its eye-popping visual effects, the film never for one second forgets that the characters are the most important thing in this film, and takes care to make each one of the titular Guardians sympathetic, likable, and hilarious.

Some big-budget films are often strained by their own sense of self-importance or dead-serious tone. Not here. Don’t get me wrong, GotG never plays like one big guffawing joke that takes you out of the fantasy. I fully believed the fantastic galaxy and everything in it. The film just found that sweet spot between cheese and awesomeness that so many films fail, often miserably, to find.

Really, it reminded me most of The Fifth Element, my favorite live-action film, which also combined stylish, otherworldly visuals and barely-controlled chaos with a firmly-grounded human heart. Eric Serra’s score, which ranged from ethereal to zany, brought all its disparate elements (no pun intended) together the same way the 70’s pop music does here.

To conclude, GotG was the most fun I’ve had in the theater in a long time, and I’m elated by the fact that a sequel is already in the works. I haven’t gone into too many details about the plot and characters because I urge you to check it out for yourself. If your recycling bin nets you rewards like $2 off movie tickets, like mine, so much the better!

Shizuku is home alone studying when Haru bursts in asking if she’s “seen him”. Before she can find out what he’s talking about, he’s gone, and left his phone behind. He does the same thing to Natsume (his net), Sasayan (his goggles) and Yamaken (his gloves and keys). Yuu comes across a rooster and sends a photo to Ooshima, who tells her it’s Haru’s. Shizuku crosses paths with her while on a rice run, and they go to the closed batting center, where Natsume, Sasayan, and Yamaken are assembled. On her way home, Shizuku bumps into Haru on the steps, where he tells her he’s looking for a firefly. Sure enough, both of them spot it as it flies off into the night.

This finale takes pretty much every character and shuffles them around here and there, all motivated by Haru’s strange (even for him) behavior and penchant for shedding belongings. It’s a clever way to say farewell to everyone, although as narrator Shizuku laments, there’s a lot more she wanted to say about them: Natsume, Sasayan, Yamaken, Ooshima, Nagoya…and Haru, who she still can’t quite come to terms with her feelings for him. She doesn’t mind being with him, but isn’t sure she could ever match his intense innocence and sincerity. To which we’d respond, why try to? Haru isn’t looking for a more peppy Shizuku; he’s fine with her the way she is (as long as she stays away from Yamaken, of course.)

She should be fine with the way she is too. She is working hard, but is still able to occasionally spend time with not only Haru, but her other friends who legitimately care about her. Why is she so obsessed with understanding why they care about her, or why he loves her, or matching those feelings precisely? This whole series she’s been fretting so much about how to proceed with a relationship with Haru, she’s overlooked the fact that she’s already in one. She’s his handler; his tamer; the one who makes his life more fun when she’s around. He’s her release valve from a dour, tedious life of study and work; someone who makes her heart beat faster. Quit over-analyzing everything and just enjoy the ride, Missy!