Fushiguro is about to summarily execute Yuuji, only for Yuuji to wrest control of his body back from Sukuna. Fushiguro’s teacher Gojou Satoru arrives to take control of the situation, and asks Yuuji to switch to Sukuna Mode for ten seconds. During that time, Gojou (the self-proclaimed “strongest” sorcerer) is able to easily keep up with Sukuna!Yuuji, and when time is up Yuuji reliably regains control.

That tells Gojou that all is not immediately lost for Yuuji. When Fushiguro asks him to find a solution that doesn’t involve immediate execution, Gojou finds one: rather than die now, Yuuji has the choice to track down and absorb all twenty of Sukuna’s fingers (he had four arms), then be executed along with Sukuna forever.

Gojou gives Yuuji the day to think about it. He visits Iguchi in the hospital, who’ll be fine once healed by a sorcerer, and assures Sasaki what happened wasn’t her fault. He then must oversee his grandfather’s cremation, and gathers the ash and bone fragments into an urn. As Gojou warns, that solemn task is a cakewalk compared to the shit he’d get up to if he agreed to become a Jujutsu sorcerer.

Now that Yuuji is aware of the threat of Sukuna he can’t stand by, or ignore his gramps’ dying request, so he’s in. He eats a second finger Gojou gives him without incident, and they head to the picturesque Tokyo Metropolitan Jujutsu Technical High School, located on the woodsy outskirts of the metropolis.

Yuuji learns that while he can still control his mind and body fine, Sukuna still “leaks out” from time to time in the form of a mouth that can emerge anywhere from Yuuji’s body to make some snide or rueful remark. Gojou then tells Yuuji he’s to meet with Principal Yaga, who will decide if he’s Jujutsu Tech material.

Yaga immediately throws Yuuji off by sewing cute plush dolls when they meet, but the principal can infuse his Curse into the dolls and use them as weapons—which is exactly what he does while asking Yuuji why he wants to enroll. As the kappa doll beats him up, Yaga makes him realize that “because by gramps said so” isn’t enough: it’s because Yuuji is the only one who can absorb Sukuna and survive. 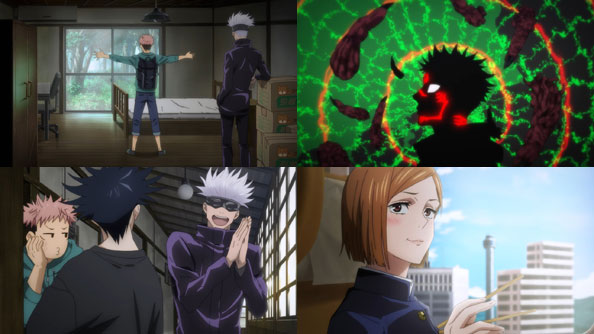 One Yuuji realizes this himself (and pins the kappa), Yaga passes him, and has Gojou show him to his spacious dorm room. Yuuji learns Fushiguro Megumi is his next-door neighbor, and along with an incoming female student, the three of them are the only first-years at Jujutsu Tech.

In addition to being the vessel for Sukuna, Yuuji also serves as a Sukuna Radar. That said, some fingers will put up tougher fights than others, especially those that have already been absorbed by other Curses. No doubt he’ll be relying not just on his fellow first-years (the third of whom we’ll meet next), but the upperclassmen and faculty like Gojou. 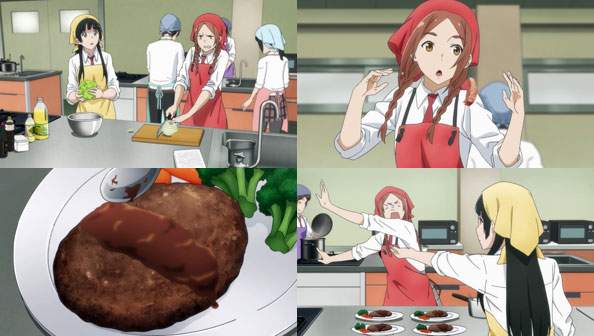 In this brisk, breezy episode, we have two distinct segments: cooking class and apple tree thinning. In the first, Makoto and Kei provide moral support and the occasional pointer as Nao, who believes she’s cursed in the kitchen, makes a pretty tasty-looking Hamburg steak from scratch.

While nervous and weary at first, Nao eventually gets the hang of the smells and sensations of working with the raw ingredients, and gets to experience the sense of victory one feels upon completing a dish. She also gets freaked out by Makoto’s cookies that look just like witche’s fingers, and no one remembers to steam any rice. 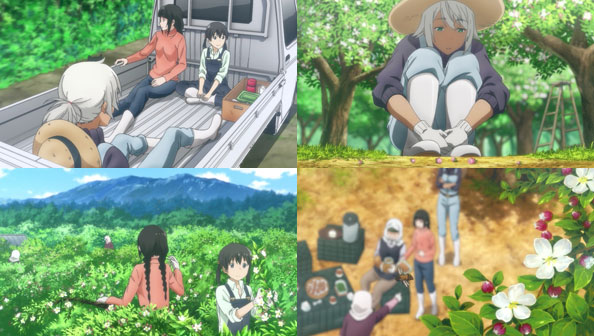 Things get more pastoral and idyllic in part two, when everyone (even Akane) get up early and head to the apple orchard to cull the blooms in order to enable the growth of fruit. Both Makoto and Akane feel the sting of not looking where they’re going, and Akane feels bad for the blooms that are snipped, but as Kei remarks, they have a use too, as nutrients for the soil.

Makoto gets a lovely view from the short tree-tops upon her ladder, which is very different from flying on a broom, and meets one of the bees that pollenates the orchard. The bee doesn’t sting, but it does bite her, and Kei shoos it away. But in the end, Makoto gets to dip one of her creepy cookies in the fruit of the bees, i.e. fresh honey. Delicious.