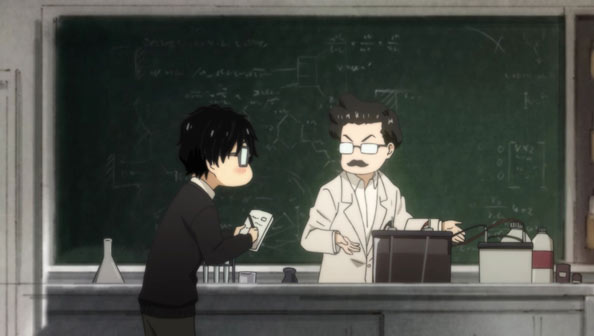 While it could be argued Hayashida-sensei got Rei in this hole by miscounting his absences, he gets resourceful in a bid to dig him out of it, including introducing Rei to the After School (Bunsen) Burners Club, a group of passionate nerds happy to help Rei out with science-y stuff. This was a lot of fun and engendered the most laughs; the mustachioed guy in particular was hilarious, somewhat Excalibur-like.

It’s a relief to the teacher to see Rei interacting and laughing with fellow students. The lesson he imparts upon Rei is that when he cannot overcome something alone, seek out someone to help; otherwise no one will ever seek him out.

After a brief fake-out with a too-confident looking Gotou, we learn that Shimada was the victor in the third and final match, making him the challenger against the ethereal reigning champion Touji Souya. Gotou was prepared to give remarks on his loss, while Shimada is so spent from the exertion he can barely stand or talk. His spirits are buoyed when Rin asks if he can join his shogi workshop. 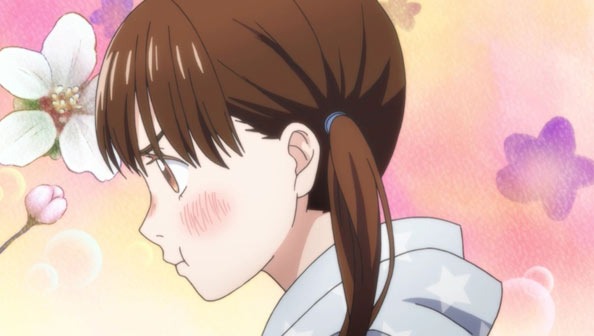 Back at the Kawamoto’s, the girls and gramps are making special boxes for the girls festival and planning what kind of meal to prepare for the special occasion. Hina is frustrated that Rei hasn’t been by, and doesn’t understand why he’d deprive himself of food (and their company) for so long. Gramps understands, though; it’s a matter of pride. He’ll come back when he’s ready.

The workshop is at Shimada’s house, a modest but gorgeous little home dramatically perched atop a hill in the oldest part of town. There’s a sense Rei has climbed a mountain to reach some kind of temple in order to aid him on his quest to enlightenment. In reality, he doesn’t spend enough time playing in non-competitive matches with peers, which is why Shimada was able to run roughshod over him.

Shimada is glad to host three gung-ho shogi players in his home for the workshop, but once the three start getting defensive, digging in their heels and barking like petty feudal lords, the toll Shimada’s matches exacted upon his body are amplified, and he cuts the ‘shop short, blaming a stomachache.

Nevertheless, Rei is being exposed to different forms of play, with nothing on the line except his still-narrow personal view of shogi play. Nikaidou even follows him home, as their argument over use of certain pieces at a certain time inspires him to want to demonstrate to Rei what he’s on about on a shogi board.

Overall, this was a pleasant (if a bit thin-feeling) episode that shows some of the incremental steps Rei is taking towards…well, growing up, becoming both a better shogi player and a better man. Notably, there were no scary flashbacks (or scary Kyouko) to be had, but like Hina I too hope he’ll end his self-imposed exile from the Kawamotos soon.