AZ delivers yet another action-packed, cinematic tour-de-force of an episode. After fighting with little but their wits and some luck, Inaho & Co. finally catch a break when the sorta-deserting Slaine tracks down the Princess and “Orange”, his nickname for Inaho’s trainer, and they finally have a decent weapon in his sleek Sky Carrier with which to do battle with their latest Martian foe.

I’m not going to mince words; Femieanne is not much of a character at all, but we can see how her sturm und drang routine would scare most humans into submission. Not Inaho; he continues to keep his cool and pinpoints all her weaknesses, such that by the time she stops playing around and getting serious about the fight, it’s too late. Meanwhile, Inaho, Yuki, Inko and Slaine buy valuable time for Magbaredge’s ship.

When a secret cave is revealed in the island’s rock face, the ship is steered in and collapses the opening. What they find is something even the Martians apparently didn’t know about: not only is the very red “demon” kataphrakt that Morito battled fifteen years ago, but an entire Aldnoah-powered hover-battleship, the reveal of which is suitably bad-ass in scale and intensity. 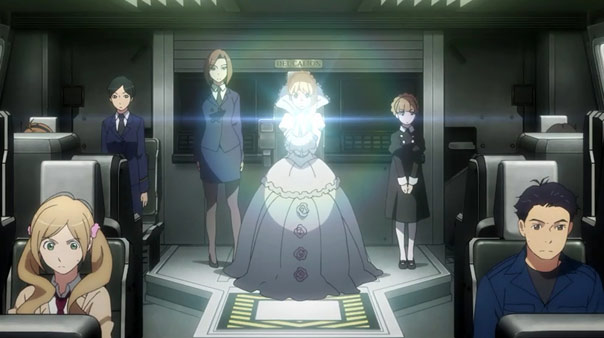 I can forgive Femieanne being a bit lame because of that and pretty much Inaho does this week, always carrying the expression that it’s, like, no biggie. He decides to put his trust in “Bat” and climbs aboard the carrier so he can gain more height in his fight with the enemy Kat. As I said, he determines the fingers and engines of Fem’s arms are weak points. But between his cool heroics and the battleship reveal, this wasn’t a bad romp at all.

After that battleship runs Fem over, leaving her a heap of twisted metal and red lights, it’s Rayet, piloting a Kat, who delivers the killing blow. Then Inaho does something unexpected but not out of character: he shoots Slaine down, calling him an enemy, and who can blame him? The humans will need the power of Aldnoah to defeat the Martians, and if Slaine aims to stop them for Asseylum’s sake, he is indeed the enemy.