I’m not so sure this Hero registration was such a good idea for Saitama. After all, none of his amazing deeds have gone noticed prior to registering, and no matter how phenomenally powerful he is, he seems doomed to never be recognized for it, whether it’s because witnesses are hardly ever around when he performs his feats, or other, more famous heroes hog all the notoriety.

When Genos informs him he must bag a bad guy within a week or lose his registration, Saitama learns just how hard it is to find a low-level monster or criminal to apprehend or punish when he actually wants to find one. Luckily, he bumps into Sonic on the streets, and Sonic is so bent on fighting him he “pretends” to be a villain for Saitama to nab, which actually just means blowing a lot of stuff up and putting people in danger.

Still, Saitama has to thank Sonic for showing up, because otherwise his career as a pro hero would be over before it ever got started.

As a bored Class-S hero Tornado (a rare female character on OPM) complains to the HA administration about getting more tasty work (a lot of the work suited to S’s Saitama already did without fanfare), news of…something bad going on in the abandoned area of City Z prompts the HA to send two Class-A’s to investigate. 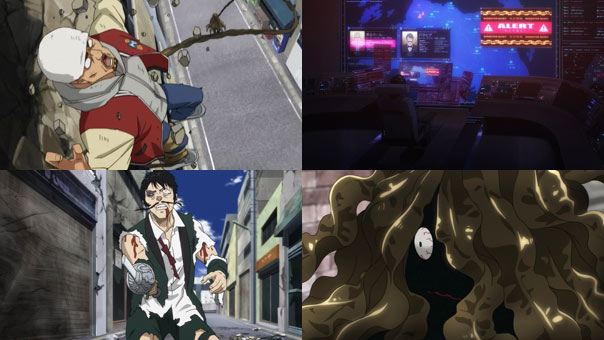 Rank 29 Golden Ball and Rank 33 Spring Mustachio saunter in, weary of the widespread destruction and lack of people in the zone. They end up confronting a vicious seaweed monster who also heard rumors about things going down in the area, including a congregation of monsters like himself, but instead decides to kill time by wasting both of the Class-A’s, clearly establishing how strong he is.

There’s something familiar about this area: it’s Saitama’s neighborhood. Ever since all those battles in previous episodes, everyone else who lived there moved out. He and Genos are all that is left, which makes the fact Genos insists on living with him in his cramped apartment all the more ridiculous. As for the seaweed monster, he not unreasonably mistakes Saitama for just a regular schlub and prepares to kill him, but rather than witness what happens next, we go straight to the end: Saitama boiling kanbu leaves from the slain monster for broth. Waste not, want not, eh?

Just as we didn’t see what Saitama did, no one else did, so he gets no credit for easily defeating down a monster that ate two Top-35s for breakfast. Instead, he rises from 388th to 342nd for apprehending Sonic, for which there were witnesses. And he gets to start the drudgery all over again, going from crim to crim in a mad dash to keep his license. There’s no justice in this world…for Saitama, that is!

Instead, only the collateral damage from his battles is noticed by the HA, who sends more heroes to City Z’s abandoned area on high alert for “something big” to go down. But there isn’t anything to be on high alert for. It’s all Saitama, taking care of business. Saitama just operates too far outside the boundaries of the system to ever find success within it. He’s too fast; too strong; too good at his job.

At least with more eyes on his location, the possibility increases that a hero somewhere, someday (who isn’t Genos) will witness him doing something great and relay it to the HA so he can finally get his proper due. It could happen.

…But it probably won’t!