Those are the words Yuko remembered Kaori saying when she first told her senpai how good she was at trumpet. They’re words she tried to put out of her mind in the midst of her crusade to elevate Kaori to the soloist’s chair, but nothing she can do can change the fact that Reina is better than Kaori. Even she can’t deny it anymore.

On the eve of the second chance she nabbed Kaori—by besmirching Taki-sensei and devaluing Reina—and Kaori’s inevitable defeat, Yuko starts to realize she’s made a mistake. As Natsuki tells her, Kaori is the one who’s going to feel the worst when she loses to Reina a second time. Asuka, always businesslike in matter of music, can’t and won’t humor Kaori.

Kumiko, just as obsessed with Reina as Yuko is with Kaori, happens to be on the right side of objectivity as well. She sees Shuu practicing hard by the water on a part Taki warned him to get right tomorrow, only increasing her desire to get better herself. But notably, she doesn’t approach him, and not just because she doesn’t want to disturb him. 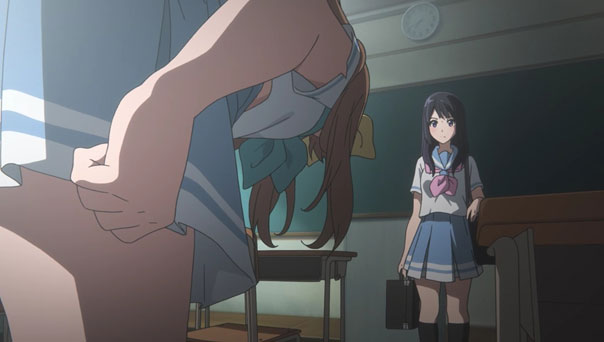 For all the trouble she’s stirred up, Yuko isn’t quite done this week, as she tries to persuade Reina to take a fall in the audition for Kaori’s sake, reciting to her all the arguments for why Kaori should get the part, and is even willing to throw herself under the bus, telling Reina she can accuse her of bullying her, and she won’t deny it.

Kaori puts up a metered front: none of Yuko’s arguments have anything to do with her, and refuses her begging. Channeling Asuka, another no-nonsense musician, Reina assures Yuko that Taki will choose the trumpeter who plays best, even though she knows Yuko knows that, and is why she’s exploring…other options.

The day arrives, with the two would-be soloists excused from set-up duty in their rented hall to practice and get in the zone for their auditions. Tension mounts, and their respective cornerwomen pay them visits. Notably, Asuka doesn’t visit Kaori, as she probably finds this whole exercise distasteful. Haruka does wish her luck, and even asks why Kaori is so obsessed with Asuka.

Kaori’s answer is clear: she feels like Asuka can see right through her and knows what she’s thinking, so she wants nothing more than to surprise her. This second audition affords her just that chance, but having heard Reina’s playing, it’s practically certain she’ll come up a bit short.

That brings us to Reina, sitting alone in the gorgeously lit lobby of the concert hall when Kumiko approaches her. Reina’s had time to think about all of the things Yuko said about Kaori, and all of the things that will happen to her if she destroys her. She asks Kumiko if she’ll be upset if she loses, and Kumiko tells her she would: she is better than Kaori.

When Reina counters that winning would make her a villain, Kumiko promises to be a villain with her. Reina draws so very close to Kumiko, asking if she’ll really stay with her, and Kumiko tells her she can kill her if she doesn’t, stating her resolve as a confession of love, echoing Reina’s own confession up on the mountaintop.

Reassured with Kumiko beyond doubt, Reina assures her that she never had any intention of losing anyway. But it certainly didn’t hurt to hear the strongest words yet of affection and solidarity from her dear friend. All Kumiko did was speak from the heart, but she said exactly what Reina needed to hear to take the stage with the utmost confidence.

The tension builds again when the two trumpeters take that stage before the rest of the band, dwarfed by the massive music hall that still isn’t as big as the venue for the competition. Taki sets the rules: Kaori will play, then Reina, and the students will vote with applause.

Kaori really seems to rise to the occasion and plays beautifully, but when it’s Reina’s turn, the difference between them is considerable, even for these relatively untrained ears. Reina is crisper, louder, and seems far more in command of the instrument. Her solo fills the entire hall and resonates. It should be plain to any of the band members assembled that she’s the better soloist. It’s stirring stuff to boot; not even having to rely on weird trippy visuals like Violin Girl. 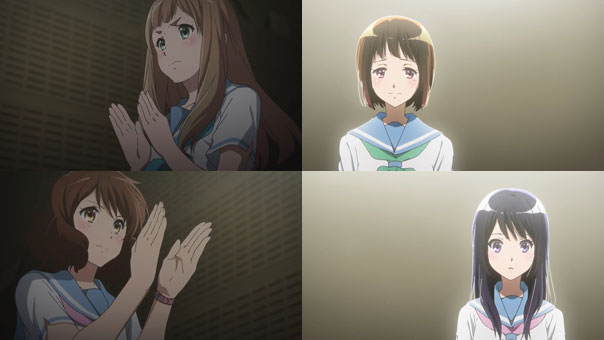 Yet when it comes time to applaud, only Yuko and Haruka clap for Kaori, while only Kumiko and Hazuki clap for Reina: a tie. Taki, ostensibly the tiebreaker, calls Kaori’s name, asking if she’ll be the soloist for the competition. After a few moment’s introspection, Kaori herself refuses, saying it should be Reina.

Really, how could she not? As both Kumiko and I have remarked, Kaori is a good person. She’s taken things as far as she can, and knows when she’s been beaten. Even if a hysterical Yuko still can’t quite accept it, she must, as Kaori does. As for Taki-sensei, it wouldn’t surprise me in the slightest if he knew this was exactly how the audition would go down.

While no one other than Kumiko and later Hazuki volunteered to clap for Reina, nor did they clap for Kaori after hearing how good Reina is, choosing to abstain. I’m sure both Reina and Taki would have preferred not being accused of being the recipient and doler-outer of favoritism, but in the end merit and talent triumphed over sentiment and pity.

If Kitauji’s going to have a chance at the Nationals, this is how it has to be.

Not that it wasn’t going to anyway, Hibike! got on my good side early this week by elaborating on that dark flashback Kumiko keeps thinking of. Turns out she beat one of her senpais in auditions, and the senpai chewed her out, saying she’d be in the competition if only Kumiko…didn’t exist.

That’s a harsh thing for someone like Kumiko to hear, and it’s clearly stayed with her, because when Natsuki asks to talk, she’s worried she’s going to get it again.

It’s not that Kumiko doesn’t believe she deserves her spot, it’s that she can’t help but feel in the way of a senpai. She deals with her objective supriority by recoiling almost apologeticaly before the one she beat. Fortunately, Natsuki is, as Kumiko aptly puts it, “a nice person.”

That is, she doesn’t hold it against Kumiko for winning the seat. On the contrary, she’s only been playing a year and didn’t expect to win, and knew she wouldn’t be able to hide either fact from Taki-sensei. So while she’s her senpai in age, Kumiko is her senpai in Euph experience, by six years!

While I believe Natsuki when she says she didn’t have high hopes, Kaori is another story entirely. She really wanted the solo part in her final year, and while it’s clear she hasn’t made her peace with the fact she didn’t get it, she’s willing to accept the decision out of respect both for Taki-sensei, Reina, and the system.

But then rumors spread of Taki and Reina knowing each other, introducing suspicions of favoritism. Yuko relays these rumors second-hand to Kaori, and while I know she’s just trying to be a loyal and caring friend, she only made things worse in terms of Kaori getting over things, because things may not be on the straight and narrow.

What’s disappointing is how indelicately Yuko brings the issue before Taki-sensei, in front of everyone. He doesn’t deny knowing Reina, but insists he showed no favoritism. When Yuko presses, Reina can no longer hold her tongue. Both she and Taki make things worse by refusing to to anything about it.

Reina storms out, followed closely by Kumiko, but rather than find Reina depressed or crying, Reina is simply frikkin’ PISSED OFF, unable to stand Yuko’s presence any longer. She gathers Kumiko in a big warm hug, seeking assurance that she’s right about being the best trumpeter for the soloist part. Kumiko gives it to her, not just because they’re friends, but because she believes it herself.

And because these two are so close and open now, Reina also informs Kumiko that she attended this school because she knew Taki would be directing the band. She probably knew rumors would surface, but they’d come from what amounts to sore losers, and she’d simply barrel through them and press forward. (Does this confirmation of her love for Taki mean Reina and Kumiko don’t have a yuri future? I guess we’ll see.)

But that’s going to be tricky. As good as Reina is, the controversy has had a profound effect on band cohesion, with people taking sides all over again, and talking about everything behind Taki’s back. The bassists send Kumiko to try to get Asuka’s opinion on the matter, but off the record (and in confidence) Asuka admits she doesn’t care either way; insinuating she’s focused on her own path. Kumiko can’t tell if she’s putting up a facade; neither can we. Asuka remains wonderfully enigmatic.

Less enigmatic but still wonderful is Haruka, who can’t rely on Kaori again (since Kaori is mired in the middle of this) nor the ever-neutral Asuka. She knows that she, the president, needs to get the band back on track. So before Taki arrives, she addresses them, and gets a show of hands for those with problems with the auditions.

She gets a number of hands, but can’t do anything with them as Taki-sensei enters, having just gotten a brief talk with the faculty adviser, who also happened to know his father. She knows that he can’t help but be honest and only care about music when it’s good enough. But in this situation, he has to be more than a greatness detector: he has to regain his band’s trust, even if it means screwing over those who already won. 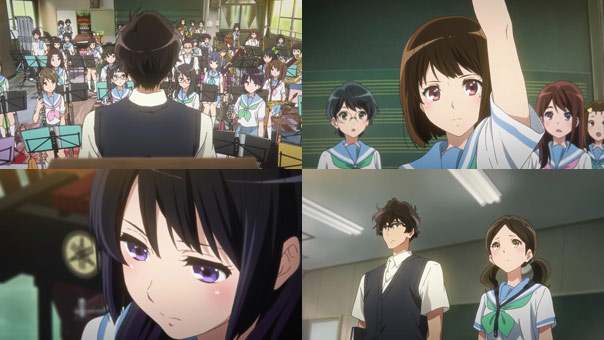 To this end, he too breaks the silence about the controversy, and offers a second audition to anyone who wants one, only this time it will be held in the concert hall he rented, in front of the whole band. The first to raise her hand is Kaori, which we know has nothing to do with her thinking she’s better than Reina or believing Taki played favorites. I don’t think she believes either.

This is, as her friend said, about accepting herself, something she won’t be able to do if she doesn’t take this opportunity. Reina’s disappointment is clear and justified, but knowing her, she’ll take this as a fresh challenge on her path to become truly special. Even if she doesn’t care what others think of her, she can’t get to the nationals without the rest of the band.

I don’t think she’ll ever win the love Yuko and others have for Kaori, and it’s possible she’ll beat Kaori so badly they’ll still be against her. But who knows, perhaps this time, out in the open, she can convince them beyond doubt she deserves the solo part. It isn’t something she should have to do, but she has to all the same.