After a comprehensive layout of the order of battle on both sides, the flatland goblins, giants, and mountain goblins advance on the three sides of the first unit, led by Deusolbert, Fanatio, and Eldrie, respectively. Eldrie falls victim to his inexperience and lets the goblins get too close, and their smoke bombs turn his flank into confusing chaos.

But Sir Deusolbert has a big ol’ quiver of giant arrows, each one of which is capable of blasting away dozens of foes in an instant. It’s impressive firepower…but there’s a limit to it, and when he runs out of arrows, he’s badly exposed and must rely on his men to protect him by essentially throwing their lives away—lives the Human forces cannot afford to lose.

Fanatio also looks poised to make quick work of the charging giants, until their chief starts to glitch and enters a kind of savage berserk mode that catches Fanatio off balance. Fortunately, her loyal lieutenant Dakira steps in and blocks the giant’s attack. Unfortunately, Dakira dies of her injuries, and Fanatio uses up a lot of time and energy eliminating the chief.

The episode ends with the front lines just barely holding together after just the first wave of Dark Territory forces, with Eldrie’s unit in particularly bad way. And that wave is nothing but cannon fodder; it felt like the knights were throwing their best weapons at this enemy without much thought to preserving some of that power for the tougher waves.

Then again, they don’t have a choice. Their regular soldiers are under-trained and untested, and even one of the younger Integrity Knights demonstrates he has no integrity by fleeing the battle to hide in a storage shed. The battle has barely begun, and the forces of the Human Empire have already taken a serious hit in manpower, energy, and morale.

Alice glides over all of this, holding her powder for the next waves to come, and summons a massive ball of…something. Destructive energy, I guess? Hopefully she can slow the enemy’s advance at least somewhat to allow the units to regroup, but it still feels like the Humans are going to need a lot more help, either from Kirito finally waking up (or at least instinctively contributing somehow) or the timely arrival of Asuna. 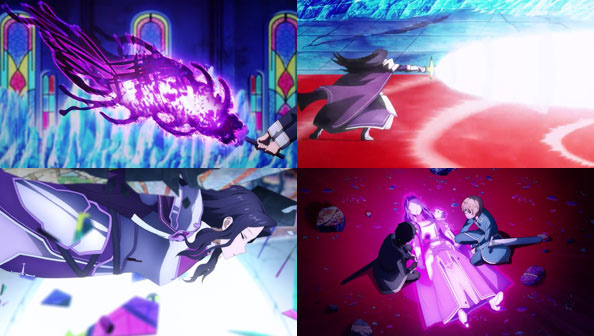 While Fanatio was able to endure Eugeo’s Enhance Armament, Kirito delivers the coup de grace with his own, overwhelming her sword of holy light. There’s a moment when it almost looks like she’s giving up, and that’s when she’s blown all the way up into the dome of the hall.

Kirito passes out once his attack is complete, but Eugeo is able to revive him by transferring some of his life. Kirito rushes to heal the critically injured Fanatio, but neither he nor Eugeo can stop the bleeding. Kirito decides to use the dagger meant for Administrator, asserting that there’s no way he can walk away from Fanatio carrying the tool of her salvation in his hand.

A bemused Cardinal takes her away and promises to heal her, assuring the lads that they can still defeat the pontifex without the dagger provided they get the jump on her while she’s sleeping, which is…often. Cardinal also sends them potions to bring them back to 100% for the next fight. I wonder if the Fanatio who wakes up will be grateful to her saviors…or regain her memories.

The only way to the higher levels is a kind of elevator shaft glowing with green light. A floating platform appears with an almost robot-like “operator” who simply asks which floor they’d like. It doesn’t matter that they’re criminals, fugitives, or enemies of the pontifex; her calling is to operate the elevator, and that’s it.

The dreary drudgery of such a calling calls to mind Eugeo’s constant hacking at the Gigas Cedar, but at least he got to go outside. The operator, who doesn’t even remember her name, would wish that if they succeed in bringing down the pontifex and her calling were recinded, she’d want to retain control of the floating platform and use it to ply the skies. 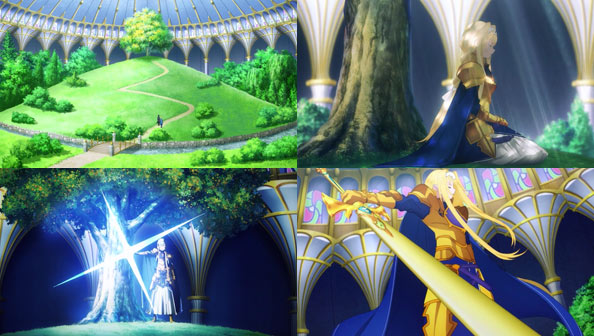 She brings the duo to the eightieth floor, the Cloudtop Garden, where they find Alice reclining against a tree, asking for a little more time to relax in the sun. When the lads keep advancing, she reveals that the tree is the ancient form of her divine object, the Osmanthus Blade.

She acknowledges that the boys must have some skill if they were able to make it thus far, but promises them this is the end of the road for them. Kirito and Eugeo have no intention of defeating her, only restraining her long enough to use Eugeo’s dagger to send her to Cardinal.

To put it mildly, Alice…doesn’t make that easy. Her Osmanthus Blade scatters into thousands of petal-like shards, giving her far more unpredictable and adaptable offensive power than a mere single blade. I likened it to the shikai of Kuchiki Byakuya’s Senbonzakura, though I’m sure there are plenty of other analogues.

Things seem to go according to plan at first, with Kirito constantly retreatin, then turning aside Alice’s blows until he’s close enough to grab her and hold her still. That allows Eugeo to unleash his Blue Rose Sword’s Enhanced Armament, capturing both Alice and Kirito in a block of ice.

But that’s where things stop going their way. Alice’s blade is exposed, and it scatters into petals and dissolves the ice. Suddenly on his heels, Kirito breaks out his AE again, and seemingly fights Alice to a draw, as the combined force of their attacks blows a big hole in the side of the cathedral.

They’re on the eightieth floor, the pressure differential sucks them both out before Eugeo can get to Alice with his dagger. Worse, the wall almost immediately completely repairs itself, sealing Kirito and Alice outside and Eugeo inside. Neither Kirito nor Eugeo alone were ever going to be able to face the Commander of the Integrity Knights—let alone Administrator. Yet alone is where Eugeo now finds himself.

I can’t imagine he’ll go all the way back down to the entrance to meet back up with Kirito, and possibly continue assisting him in his duel with Alice. Or perhaps the duel is over as far as Alice is concerned. In any case, getting the two lads back together will take some doing. I wouldn’t be surprised if a dragon was involved. 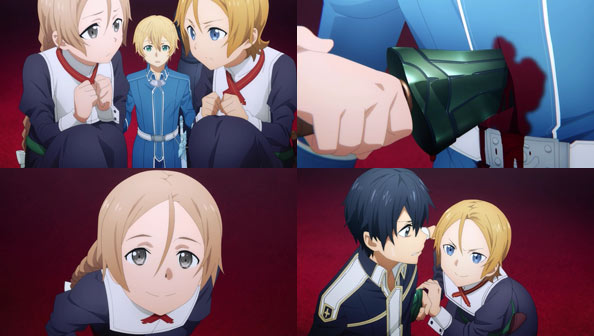 This is an episode of jumping to conclusions with regard to one’s opponents…or is it? Eugeo and Kirito are seemingly caught off guard when the two young Axiom nuns plunge their paralyzing poison daggers into their chest and back, respectively. Linel and Fizel are not merely nuns, but Integrity Knights in their own right. And they both revel in having been seen as nuns just long enough to draw in close enough to attack their prey. 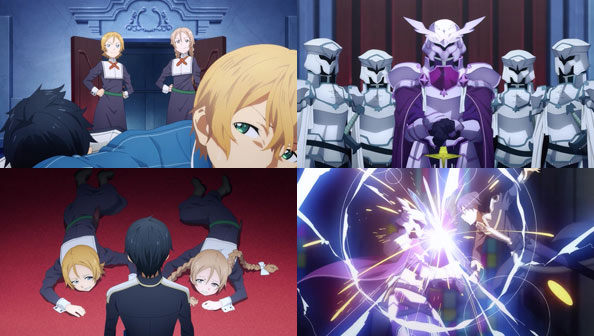 The girls drag the paralyzed guys up to the fiftieth floor Hall of Ghostly Light, where the Four Whirling Blades and Vice Commander Fanatio Synthesis Two are waiting. The nun knights, the last two sheltered survivors of one of the Ponfex’s resurrection experiments, don’t want the other knights stealing their thunder, but still need witnesses when they behead the criminals.

Unfortunately for them, Kirito only mistook them for harmless kids for an instant; far less time than they thought. When he noticed apprentices were disobeying orders (an impossibility in the cathedral) and wearing ruby oak sheaths (for poison daggers), he quietly recited a poison-dissolving art, which completed in time for him to stop them and give them a taste of their own medicine.

He cures Eugeo, then tells him to quietly recite a perfect weapon control art when he can and wait for his signal. Then he drives past the Four Whirling Blades and crosses swords with Fanatio one-on-one. Perhaps impressed by his cheek, Fanatio orders the subordinates to stand back as they duel. 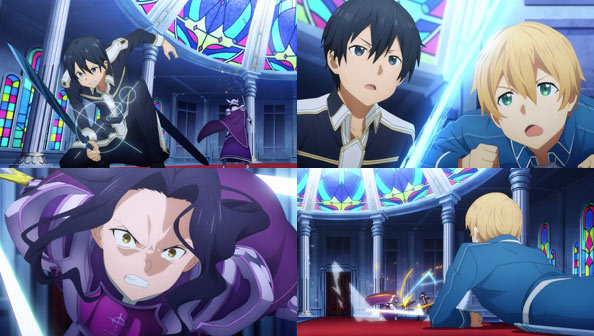 Fanatio learns that despite a sword that contains the reflective power of the sun itself, Kirito and his black sword are no slouch. He chips off a piece of Fanatio’s helmet, endures the heavenly sword’s beam-like strikes (to non-vital areas) and eventually knocks her helmet off. That’s right: Fanatio is a woman. The look of momentary shock in Kirito and Eugeo’s faces pisses her off to no end; they’re faces she’s seen all her life.

But the one who seems most upset that Fanatio is a woman is…Fanatio herself. It is Fanatio reading her own book by its cover, and reading Kirito’s cover as Just Another Guy who won’t fight her with everything he has. As with Zel and Nel, Kirito quickly moves beyond his instinctive surprise and fights her on equal terms; as he says and we know, he’s no stranger to being beaten by swordswomen.

A splendid duel ensues; one that Fanatio almost seems grateful for, as for once she isn’t being underestimated or not taken seriously, despite her “detestable” face. Kirito asks her if she thinks she’s so detestable, why does she doll herself up so; it’s strongly implied she loved/loves Commander Bercouli Synthesis One.

But there’s no room for love, or anything else, for Integrity Knights. Only “glory” through obedience to the Pontifex. And so even when Eugeo unleashes his Blue Rose Sword upon her, he can’t quite finish the job. Part of that is that he trying to beat her with his hatred, and as Kirito calls for his own weapon enhancement, he corrects Eugeo’s thinking.

They’re not there to kill the enemies they hate, but to save the people they love—as well as those enemies themselves—and end the tyranny of Axiom so humans can live normal lives. And he’s going to do it or die trying.