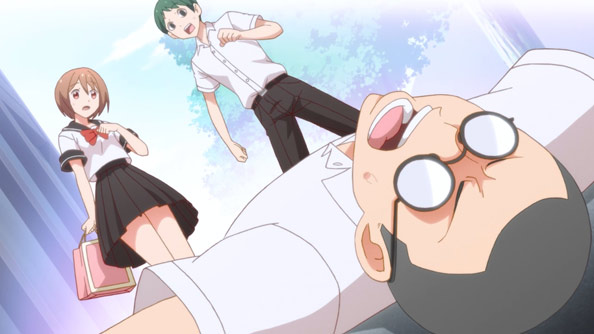 Motoyama has to endure the extreme wussitude of his friend Yamane Kurihara, the girl who likes him. She made pudding for him, so asks him behind the school, but Yamane take Motoyama along, and once he’s there, Kurihara doesn’t want him to leave either!

When he finally does, Kurihara simply hands the pudding over to Yamane and the two depart just moments later. An exercise in futility, as long as Yamane continues being so low on himself.

Kamine and Gouda are faring much better, but there are still things Kamine wishes her boyfriend would improve upon, like not being so sudden, calling her by her first name, and not holding hands with other girls—even if it’s to arm wrestle with the foreigner Patricia. (Opening bottles is okay, but if he’s nice to another girl he has to be nicer to her).

Gouda takes all of this in stride, not minding at all that she’s being a little needy and selfish because, well, he likes her, and thinks she’s only gotten cuter since they became a couple.

When a passing Kana and Chiaki spot the happy couple doing things they never imagined Kamine or Gouda would do (especially in public), you could say they are inspired, and try to have their first kiss right there.

Unfortunately, it is interrupted by…Kamine and Gouda, and the two couples exchange ‘what are you doings’ with ‘aw nothings’ and that’s that. Only Kana and Chiaki actually did nothing.

So it was exciting to see the show stay with Kana and Chiaki for the final segment, though in hindsight I might be sorry I wanted such a continuation. Chiaki invites Kana to his otherwise empty house with the express intention of kissing her before she has to be home by 8.

After a lot of awkward interactions, he decides to do a skit—one in which he pretends to be drunk. Chiaki assumes he drank something, and would rather their first kiss be something they can remember with fondness, even if it isn’t a big deal.

Then Chiaki reveals he’s just acting and surprise-kisses Kana, then invites her to ‘play along’ as if it were another one of their skits…and she is NOT into it. In fact, she storms out in tears, declaring their duo over. Is it really over? I hope not, but Chiaki had better apologize! 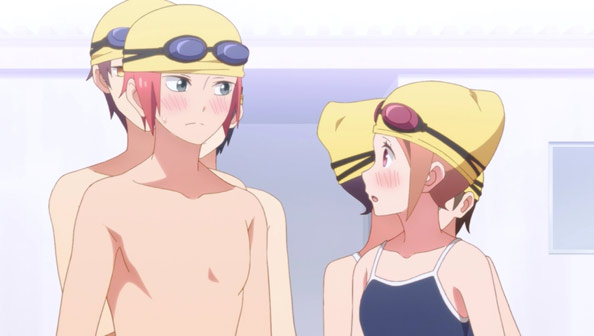 This show, and this episode in particular, is brimming with wrong assumptions made in the heads of the young and in love. Those assumptions make progress slower than it would be if they could only properly communicate with the ones they like.

But again, these are kids, and it’s their first love, so rookie mistakes are to be expected. It’s those tiny steps in the right direction that make me not only stay invested in all these various couples, but gives me hope that some day they’ll figure it out.

Sugawara and Takano’s eyes meet so many times, both wrongly assume they’re bothering one another…but a tiny bit of progress is made when Sugawara tells her he was, in fact, looking at her. Takano said she was looking at him too…now she just has to say it to the correct person, not Gouda!

Few couples got off to a worse start than Kanda and Takase, but neither likes the distance that has grown between them, and so they make up. That they both wrongly assume the best they can get out of the other is friendzoned is a concern, but they are talking to each other again. Progress!

I’m on record in older reviews of her work as saying Ogura Yui’s trademark syrupy-sweet voice sometimes sounds like nails on a chalkboard, but I’m enjoying her work as Kamine, who is the most aggressive of the characters this week.

Unfortunately the body language she exhibits while struggling with the fact she “blew” her first kiss with Gouda is being wrongly interpreted by Gouda as having gone too far in kissing her. Kamine tries to force the issue by pretending to fall asleep on his lap, but for her trouble, Gouda nods off for real and they nearly touch faces.

Finally Furuya is sick of dragging things out, and wants to properly, seriously give Minagawa an answer. But he wrongly assumes that all of her different kinds of “likes” she throws at him (kudos to Hana-Kana here) is all part of an extended teasing regimen, when in reality, teasing is what gives Minagawa the courage to say the things she does.

When she says that none of the ways she says she likes him are adequate, she has Furuya close his eyes and…well, does she kiss him? Sure looked like it to me, but then she had those fingers up. Minagawa thinks Furuya should know whether her lips met his…and she’s right! Lips and fingers don’t feel the same!