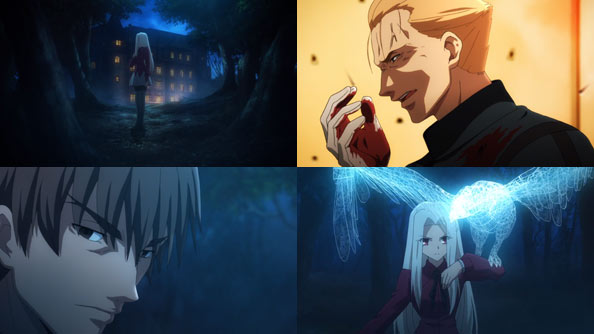 Maiya has orders to escort Iri away from the castle, but the orders aren’t so precise that Iri can’t countermand them when she senses Kotomine Kirei approaching. She doesn’t want that guy anywhere near her Kiritsugu, and Maiya feels the same way, so the decide they’ll do what they can to keep him away.

Neither of them are any match for Kirei’s considerable mage-executing skills, so all they can do take up as much of his time as they can. The bravery, grit, and selflessness the women exhibit without Saber by their side is something to behold. There’s no doubt Kirei is a fearsome, superior foe, but it doesn’t matter: he’s not getting to Kiritsugu, period.

Meanwhile, a bullet from Kirei’s pistol gets through Kayneth’s quicksilver defense, but he chalks it up to a fluke and a moment of poor focus to the disgust of fighting such an awful mage, and redoubles his defenses…which is exactly what Kiritsugu wants. 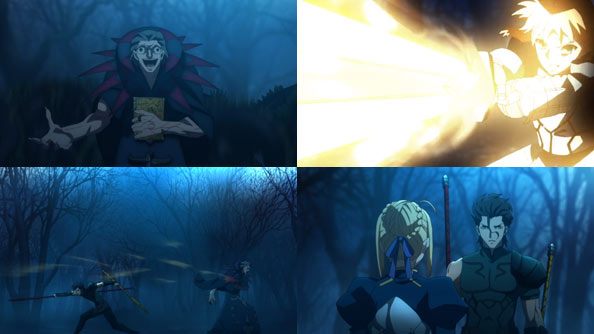 Saber and Lancer are having no luck, as there’s no end to Caster’s minions as long as he’s holding his noble phantasm, an old grimoire. Rather than keep hacking away, Saber clears a path with an Air Strike, through which Lancer dashes and slashes the book with Gae Dearg, and just like that Caster is defenseless and must withdraw.

Saber and Lancer’s ‘knightmance’ proceeds apace when Lancer senses his Master is in danger, Saber senses it’s because of her Master, and gives Lancer leave to tend to Kayneth, in accordance with the ideals of nobility and chivalry, while she rushes to help Iri and Maiya. 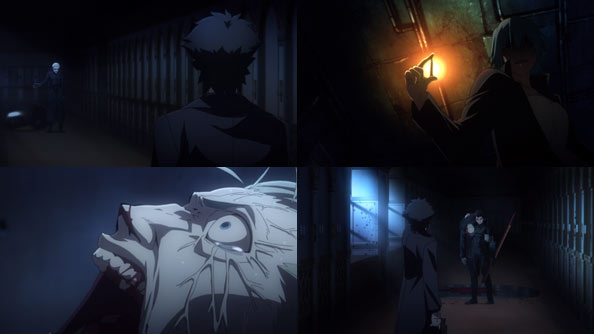 The next time Kiritsugu fires his pistol into Kayneth’s heightened magical defense, it scrambles the opponent’s magical circuits, causing him to cough up a good deal of blood and pass out. Kiritsugu remembers his mentor(?) explaining the bullets which contained his own ribs in powdered form; but he was only given 66 of them, and we see him use two on Kayneth.

And even that doesn’t kill Kayneth, only gravely wound him. Lancer arrives to rescue him and withdraw, and tells Kiritsugu that he’s only alive because of his Servant Saber’s devotion to the right-and-proper precepts of nobility; because she is the King of Knights. I’m sure Kiritsugu’s glad Lancer didn’t kill him, but less pleased Saber let Lancer get away so easily.

What’s so great about this situation is that everyone has a reasonable position here and nobody is outright right-or-wrong. In a way, Saber went rogue, but again…Lancer would have Kiritsugu him if not for her. 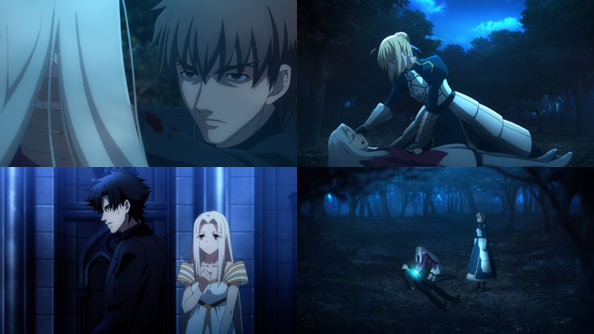 As he beats Maiya to a pulp and chokes then stabs Iri (who he thinks is a homonculus), Kirei can’t fathom why not one but two people challenged him, of their own accord for Kiritsugu’s sake. Kirei has been operating under the assumption that Kiritsugu is, like him, friendless, alone, and understood by no one. But he’s wrong…and I kind of pity him for being so.

One could say Kiritsugu using Iri as a kind of “decoy master” smacks of cowardice, but that position doesn’t take Iri’s (and Maiya’s) feelings into consideration. They do protect him of their own accord, as we witnessed here, and they will continue to do so.

Kiritsugu seems to know this, because when Saber finally comes and touches the injured Iri, she is immediately healed by the scabbard Avalon implanted within her according to her husband’s wishes—something only he and she knew about. Kiritsugu is not alone, because there are those who don’t want him to be.