Index shifts from Avignon to Academy City, and the only character from that previous mini-arc who appears here is Tsuchimikado, carrying out his duties as a member of the anti-underworld group, er…GROUP. Other members include the teleporter Musujime, the skin-changing Unabara (at least I think he’s aligned with them), and Accelerator, who still thinks everything’s a big drag but still does his job when told. For all you Index junkies out there we also get cameos from Heaven Canceller and Last Order. 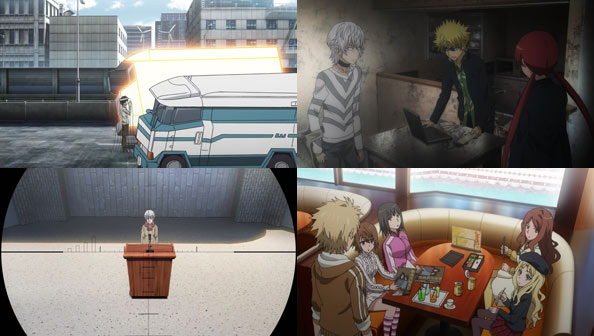 GROUP’s latest mission is to follow a series of actions by another group that calls itself SCHOOL, led by 2nd-ranked Level 5 Kakine Teitoku. They carry out an attempted assassination on Oyafune (the woman Tsuchimikado himself shot a couple episodes back; woman can’t catch a break) but Accelerator and Musujime create a diversionary explosion that foils the hit.

However, even the attempt helps SCHOOL, as it throws citywide security preparations into disarray, which is what they really wanted (Oyafune is a little fish in a big pond). GROUP isn’t the only group after SCHOOL; Mugino Shizuri’s ITEM is following their movements as well.

When SCHOOL and ITEM come together, Mugino ends up having to leave behind half her crew, while her errand boy Hamazura barely escapes from a heavily-armed girl in a pink cocktail dress; Kakine gets away with the “nanoparticle object interference absorption manipulator”, AKA “The Tweezers.”

SCHOOL then proceed to crack a school district computer virus archive, then gain access to the satellite control center…which would enable them to use the orbital lasers. Not good! Kakine mentions his ultimate goal is to get to (Academy City administrator) Aleister Crowley. GROUP and the wounded ITEM seem always at least a step behind, but Accelerator hijacks a passing car to head to the center and…take care of business.

There’s a lot of names, groups and terms to remember, but most of them were in previous iterations of Raildex, so there’s still a thread of familiarity running through the episode. It’s also neat to see the very active Academy City underworld in action, and to see how relatively clueless an official law enforcement officer like Yomikawa Aiho is to what’s going on.