“Second Sun” was my other choice to name this review, though I went with “Decisive Battle” in homage to the best battle theme in anime history. And this was a decisive battle, in that it dispensed with the enthusiastic but ultimately one-note villain of Lt. Rekka as quickly and efficiently as he was revealed.

My other reason for recalling Eva’s battle theme is that both the music and the visuals took on a decidedly Eva-esque flavor, while Rekka’s rants were full of “Evangelists.” Of course, with all the crosses and creative expliosions flying around, comparisons have been in-Eva-table from the start. Sure enough, one of Fire Force’s storyboarders did key animation on Eva.

While Shinra is quite different MC from Shinji, his hot/cold, love-hate relationship with Tamaki echoes that Shinji and Asuka. Tamaki’s Lucky Lechery ability means Shinra always has a soft body to land on when Rekka blasts him back. Rekka’s flames also conveniently burn most of her clothes off, while Shinra’s jumpsuit is unaffected.

Still, having been unable to fight Rekka herself, Tamaki offers Shinra support as she urges him to do what she couldn’t. Shinra rises to the occasion, exploiting his superior mobility in the warehouse and delivering an unpredictable parkour-style offense to Rekka’s more conventional two-feet-on-the-ground strategy. The battlemation is, as ever, bright, bold, and beautiful. 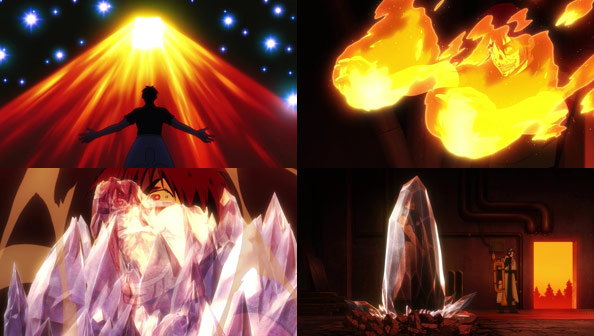 The times when Rekka knocks Shinra back, he makes sure to rant more about what his cult is trying to do: make the Earth a second sun. It’s your typical “villain wants to burn the world down to make a new one” position, and Rekka goes all out despite the fact that his friend Karim has always had his back, and today is no exception.

The only difference is, instead of backing him up, Karim freezes him out, converting his overheated flames into an ice prison. Karim kept him alive, hoping to get more info about who he works for out of him, but a fire sniper (clever concept) shoots a round straight through the frozen Rekka’s chest, killing him, then starts firing at Karim, Shinra, Tamaki, and the kids.

Karim has Shinra put up a smokescreen and locate the snipers, then freezes Tamaki’s twin fire tails as they point out the sniper’s location, causing them to wig out and retreat lest they get exposed. Their main objective of eliminating Rekka as a source of information was a success, but Karim vows to assits the 8th’s investigation of the Evangelist in any way he can.

In an after-credits sequence, we find Shinra has returned to the 8th, with his inter-company training suspended after the Rekka incident. He’s glad to be home with his fam, but finds that two people are out of place. Arthur “got lost” during the incident, and they can’t find him (to be continued).  Tamaki, suspended from the 1st for her role in the incident, is now on the 8th with Shinra, no doubt to be a source of both glee and woe—hopefully more of the former.

After running from a somewhat pathetic display from a suddenly sobbing and Raving M (who actually believes Pitohui will murder him IRL if he loses), LLENN decides she’ll have to win the SJ all by herself, despite her opponents being very smart, crafty, and downright scary in their relentlessness.

Her foes look tough and grizzled, and aren’t afraid to rain bullets down upon LLENN in order to spring her from her hiding spots. The only thing is, she’s so small and quick actually getting a killshot proves most difficult. Despite her wavering confidence and the near-arrogant attitude of her opponent, both parties are on the same level here.

Perhaps due to her critical HP level, LLENN starts to hear her P90 “P-chan” glow, talk to her and even sprout eyes to make a face, which is definitely the most demented and terrifying thing GGO has shown us thus far.

Regardless, P-chan manages to fire LLENN up, and she remembers how and why she’s succeeded so far: not by running, hiding, and keeping her distance, but by blazing in so close to her opponents they cannot get a clean lock on her, and overwhelming them with her quickness, and peppering them with P90 bullets.

She executes her preferred strategy by taking on Eva, the “Boss” of the enemy squad, whose enormous size and brute force end up momentarily overwhelming LLENN, who needs a last-second assist from M, who manage to gathered up what was left of his decency and rejoin the fray (and who does thrive from great distance).

Eventually, LLENN and Eva run out of bullets, but Eva’s lieutenant tosses her a new clip, and LLENN has no choice but to sacrifice P-chan to shield her from the bullets, then whip out her knife and carve the Boss up like a turkey to take the SJ win, demonstrating the literally cutthroat tenacity required to prevail over such a tough opponent.

Back IRL, the short cute girls Karen passes by so often finally approach her, led by Nitobe Saki. They’re second-years at the high school affiliated with Karen’s college, and just wanted to tell her how stylish and cool she always looks, especially with her new ‘do.

Then Saki draws Karen in close with a handshake and quietly congratulates her on her victory. Saki is Eva, the hulking Boss she defeated as LLENN, and her friends and fellow rhythmic gymnastic teammates are ready for a rematch any time.

14 years after third impact, Ikari Shinji awakens to a world he does not remember. He hasn’t aged. Much of Earth is laid in ruins, Nerv has been dismantled, and people who he once protected have turned against him. Befriending the enigmatic Nagisa Kaworu, Shinji continues the fight against the angels and realizes the fighting is far from over, even when it could be against his former allies. The characters’ struggles continue amidst the battles against the angels and each other, spiraling down to what could inevitably be the end of the world. (Source: ANN)

We find ourselves in a conundrum: having primarily written reviews on individual episodes lasting an average of twenty or so minutes each for nearly three years, whenever a film comes around, it’s a struggle to write a review about it. Fully aware that having just finished watching the film without even starting to absorb everything we saw and heard, we won’t be able to do our ultimate thoughts justice in this hastily written review. So instead we’re going to try to keep things as brief and simple as possible, starting with our verdict on the third Evangelion film: It was good. Very good. Everything we were hoping for, and far more than we could have expected.

It occurs to us that back in June 2010 (about three months before we started up RABUJOI), after returning from a trip to Tokyo and having been bombarded with promotional material for the second film, we did just that: keep it simple. That review was just 465 words, back before we had written many reviews. We didn’t re-watch the first two films, but we did re-read our review of the second in preparation for the third. In hindsight, we needn’t have bothered. The third film is all-new, continuing the trend of showing us an Eva we have never seen before, drawing from a dense mythos that has endured and thrived for 16 years now.

Like the Children, the Eva franchise is a teenager, and a moody, fiery one at that. It lashes out and grabs you from the thrilling opening minutes, and as usual, even when we found ourselves as lost and confused in all the sci-fi, crypto-theological techno-babble, elaborate mechanical feats, and apotheothetic explosions as Shinji, we still loved every minute of it. But strip away all the fancy eye candy, and intentionally or not, Anno Hideaki tells a very simple story in this film. It’s about Shinji waking up after an amount of time equal to his entire life, finding that everything is different and nothing makes sense, and being totally unable to deal with that.

With his new friend Nagisa Kaworu (AKA Seele’s Child), Shinji calms down and is able to find a purpose in this new world, only that purpose not only makes him an enemy of his friends, but also threatens to destroy the world rather than save it. Still, even when Kaworu warns him not to, Shinji follows through, makes a bigger mess, and has to be bailed out by Kaworu, who becomes the thirteenth angel. He saves Shinji, and by stopping the fourth impact, saves the world as it stands and everyone in it.

Dejected by the loss of Kaworu, with whom he had bonded so deeply, and aware that his actions have somehow been the cause of everything thus far, Shinji cowers in the darkness of his ejected and soft-landed cockpit plug. He’s afraid to move, to do anything else that will hurt others. But then Asuka finds him, pulls him out, grabs him by the hand and makes him move forward with her. Rei has also landed nearby, and what do you know, the three kids are reunited for the grand finale. After dealing with a world where everything had changed and everyone rejected him, and the only person who didn’t died, Shinji now has a little bit of stability back.

His dad is a distant ass and he never knew his mom, so these two girls, whatever else they might be, are his family.