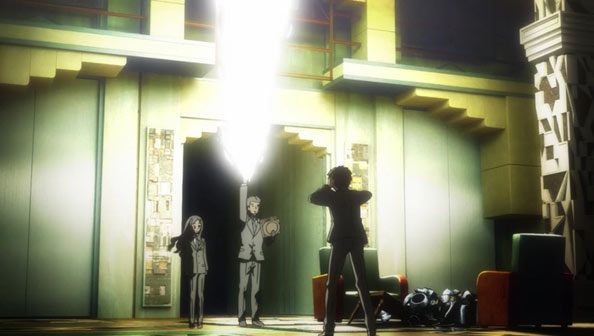 Two former Aztec comrades come to kill Etzali, apparently independent of anything else going on in this episode. Thankfully this tangent doesn’t drag on too long, since I’m not sure what it’s supposed to be about or why. Like last time with Xochitl, Etzali seems to hang around the fringes of the show only to be suddenly confronted by old comrades who want to kill him, but always end up failing. 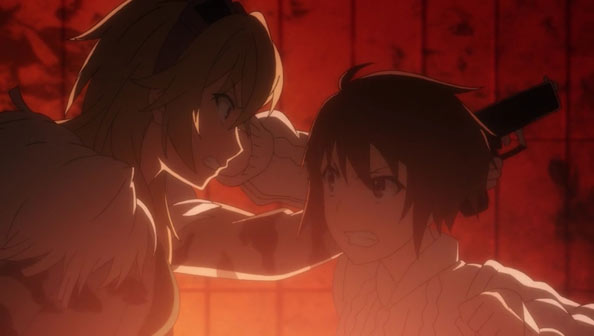 Moving on! Kinuhata uses a bottle of nitrogen she always keeps on her person in case someone tries to neutralize her powers by filling the combat space with flames, as Stephanie Goofyname does. The nitro enables Kinuhata to rush at Steph and punch her in the face, thus defeating her (?) and allowing Hamazura to escape with Takitsubo.

But Kinuhata is immediately arrested by SWAT under the command of the Girl in the Dress. She informs Kinuhata that the chase isn’t over for Hammy, as apparently all of Academy City’s forces are after him. He’s an unpredictable element that Aleister Crowley would rather eliminate than worry about mucking up his carefully-laid plans (whatever they are). 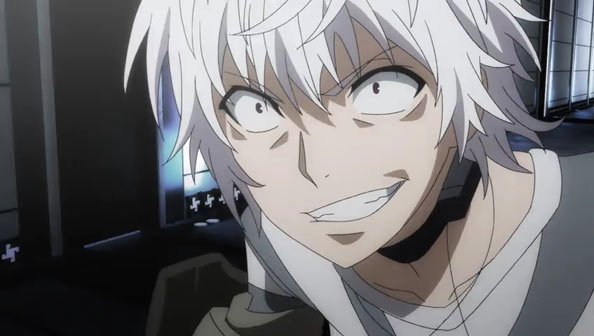 Next Up: Accelerator. His fight with Koga doesn’t last long, since whatever clever trick Koga tried on him ended up getting flipped around by another clever trick by Accelerator involving his electrode and walking cane.

I won’t get into the technical details because frankly I forgot what they were, but suffice it to say, as expected, Mr. Random Smoking Dude is not the one to do in everyone’s favorite unhinged Index antihero. 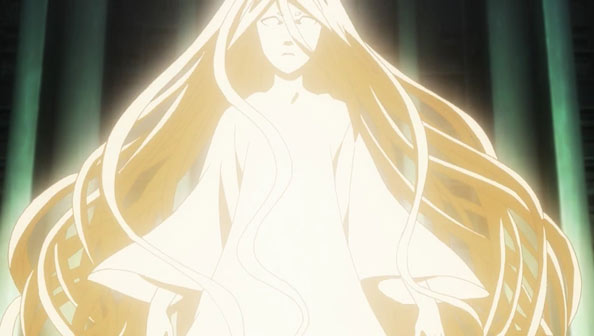 GROUP reunites and tries to get Shiokishi to spill the beans about what DRAGON is, when DRAGON itself appears, knocking everyone out but Accelerator. Appearing as a brightly-lit angel-like being, DRAGON reveals his real name is “Aiwass”, and he’s a being that was both summoned by and mentor to Crowley.

The two are now pitted in some kind of supernatural philosophical debate about the value of people’s independent actions versus the efficiency of using people, or something to that effect. Honestly it’s a lot of mumbo-jumbo that purports to get closer to the core of what exactly Crowley is up to, but doesn’t seem to have much to do with the events of the last couple episodes, except that Crowley and Aiwass were able to observe different kinds of heroes in action. 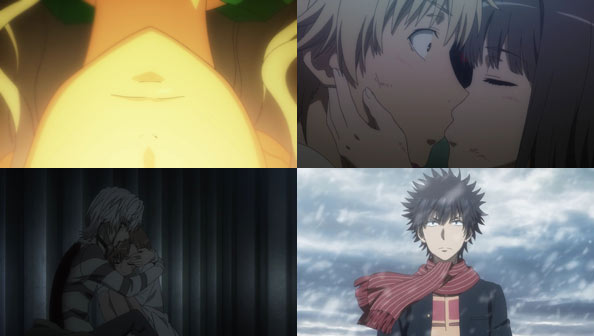 Did I mention the show brought back Mugino, mostly so she could tell Hamazura that Kakine Teitoku is still alive too, and so could kill her again in an aircraft testing chamber. Hamazura and Takitsubo escape on a military plane headed out of Academy City, while Accelerator grabs Last Order and boards a train out of Academy City.

Accelerator is headed to Russia, where Touma has just arrived, and seems to be a bit underdressed for the climate. Perhaps Hamazura will head there too. All three guys have gals they want to protect, while all three gals are in danger of having their lives snuffed out by current events. Perhaps we’ll find more clarity and focus in Russia…or maybe Etzali will run into more friends while Aiwass speaks to them in tongues… 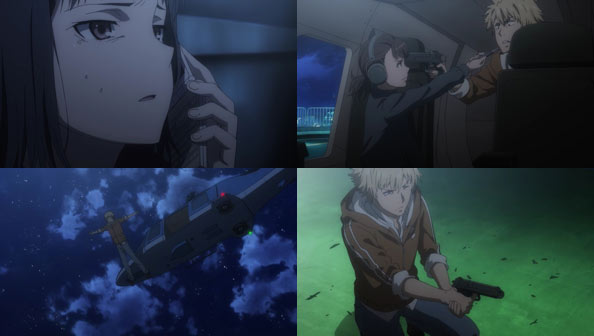 Hamazura uses all the guile and resourcefulness he can muster to get to Takitsubo, settling on commandeering a helicopter (the pilot basically agrees to drop him off, but has to report it as a hijacking). In doing so, he ignores Takitsubo’s warnings about Spark Signal being too heavily armed for Hamazura to rush in recklessly. 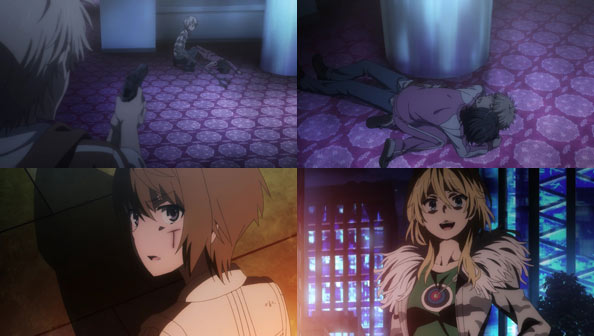 Of course, since Hamazura is classically a rush in and figure out everything later kinda dude, that’s what he does. When he finds Takitsubo, Accelerator is looming over her, but has no real ill will towards either of them until Hamazura picks a fight.

Accelerator uses minimal effort to beat the crap out of Hamazura before leaving him to be comforted by Takitsubo. Neither of the former ITEMers are in particularly good shape, but they’re at least better off together as they search for Kinuhata.

Meanwhile, Stephanie has made Kinuhata her present primary target, urging her to make peace with the fact she’s going to take her life for what happened to Sunazara. 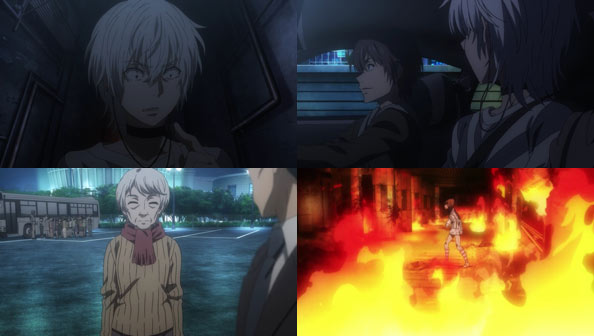 Shortly after the subject of DRAGON comes up in the RV, it’s targeted and destroyed by a missle, and the electricity in Accelerator’s gear is cut. He eventually wakes up in the car of the guy whose beloved teacher he saved, proving that even villains are paid back for their good deeds, even if Accelerator didn’t expect it.

The other members of GROUP having survived, Tsuchimikado sends Accelerator to talk with Director Oyafune for political help in bringing down Shiokishi after he betrayed GROUP. Her bodyguard insists she’s no longer involved in the fight against the Dark Side of Academy City ever since her daughter was taken hostage.

But when one of the little kids Accelerator saved from Spark Signal demands to come and fight alongside him (he calls Accelerator a “hero”, the opposite of what he constantly calls himself), Oyafune is done being a coward who does nothing to stop the darkness.

Hamazura and Takitsubo finally locate Kinuhata, but she’s been driven into the metro by Gorgeouspalace, who sets the whole station aflame with explosions in an attempt to rob Kunuhata of the nitrogen she needs to fight. Will she, a Level 4 after all, yet be able to fight Steph off? 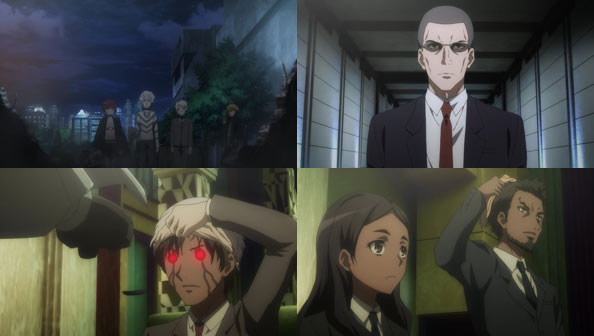 With Oyafune in tow, Accelerator and Musujime infiltrate Shiokishi’s “fortress”—the guy is a war hawk after all—and are quickly separated from Oyafune by blast walls. Musujime is then knocked out by poison administered when Shiokishi’s boyguard Koga lights a cigarette. Accelerator will have to deal with the man—part of an age-old family of tough, troublesome thieves—on his own.

As for Oyafune, she looks particularly vulnerable trying to negotiate with a guy so paranoid he’s wearing a mech suit. When negotiations break down Shiokishi prepares to kill her, but she reveals she’s not Oyafune at all, but Etzali in disguise. She may be in a safe(r) place at the moment, but she still had to sacrifice the skin on her arm so he could take her form. Now the negotiations will continue, as Etzali demands to know what DRAGON is.

They’re interrupted by two more guards Shiokishi sends in, only for them to pull of their skin masks to reveal they are two members of Etzali’s old group, Return of the Winged One. As if there weren’t enough tangled interests involved in this arc. I tell ya, it’s as if you can’t trust any face you see on this show! 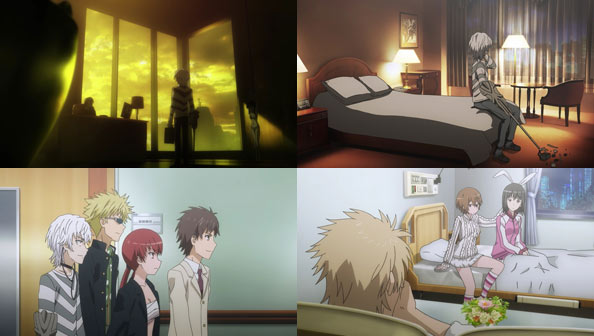 Looks like Touma and Index’s story is on hold as we return to Academy City, presumably at the same time the two are in Britain. With the ITEM, SCHOOL, BLOCK and MEMBER groups officially “defunct”, the remaining members of ITEM (Hamazura, Takitsubo, and Kinuhata) consider their next moves.

Meanwhile the group, er, GROUP, consisting of Accelerator, Tsuchimikado, Musujime and Etzali, continues to execute jobs. Boring jobs, to hear it from Accelerator. He repeatedly calls himself a “punk-ass villain” even as he’s rescuing a woman being used as a “punching bag” or saving a pregnant woman’s life. 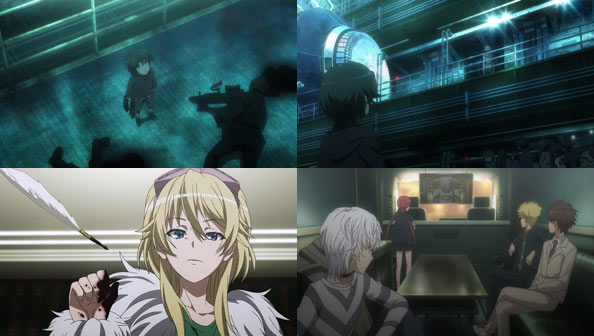 Musujime also sends him 100 meters underground where he saves a group of kids from terrorists hoping to use a particle accelerator to hold the governing board hostage. Meanwhile, a friend of SCHOOL’s sniper Sunazara, one Stephanie Gorgeouspalace, decides to kill her former boss, seeking revenge against all of Academy City.

As GROUP is given fresh orders to kill off the 20 remaining terrorists of Spark Signal, all Accelerator wants to know about is the mysterious DRAGON; Kinuhata then informs Hamazura that the remaining pieces of the defunct groups are being combined and given the same mission as GROUP. Kinuhata doesn’t want to be on the new combined team, so she asks Hamazura to help her take out the terrorists alone. 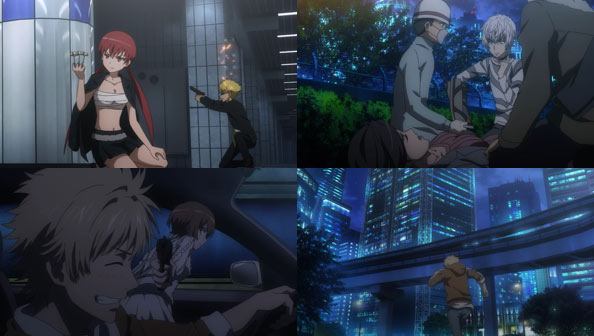 As GROUP engages the terrorists in the subway, Aceelerator saves the pregnant woman, and when one of her students thanks him, he shoots at him, telling him to get lost. Such a pleasant fellow, Accelerator!

Hamazura drives as Kinuhata takes on a six-winged drone chasing them, then the two part ways. All Hamazura wants to do is retrieve Kinuhata and get back to Takitsubo, but he gets a call from SCHOOL’s “Girl in the Dress” known also by her ability Measure Heart, telling him to pass on the message to Kinuhata that the terrorists she’s after have seized a private room in School District 3. So that’s where Hamazura’s now headed.

I have to admit to a bit of whiplash after the British Coup arc—I’d hoped we’d get to see a bit more Touma and Index, but I suppose they’re at a good stopping point, and time doesn’t stand still back home in Acedemy City. It’s also notable that there was no Misaka sighting this week; I wonder if she’ll see any action during this reorganization of groups and continuing terrorist activity. 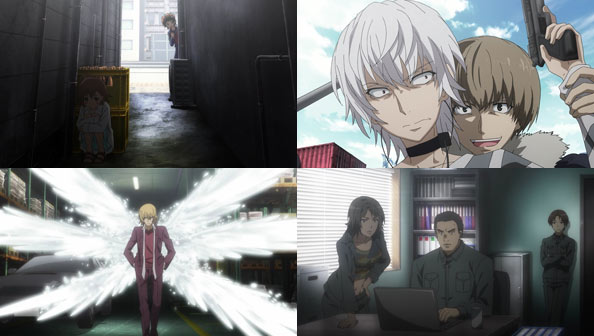 In a so-far unrelated story, Last Order escapes the taxi, only to be retrieved by Uiharu. GROUP’s Accelerator and SCHOOL’s Kakine Teitoku are both attacked by members of, er, MEMBER, but both of them win easily as their opponents grossly underestimate their power. Meanwhile, BLOCK prepare to execute the next phase of their plan, unaware that one of their members is really GROUP’s Etzali. 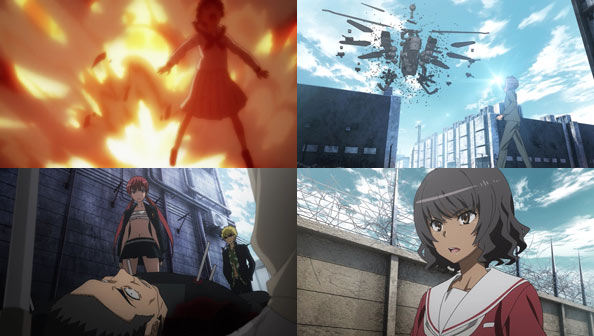 Their plan involves breaching the city wall to allow five thousand of their armed mercenaries to storm in, but Etzali throws an Aztec wrench into their plans, and then a fleet of helicopter drones make quick work of most of their army. Tsuchimikado and Musujime get more intel about BLOCK’s plans, which lead them to the Reformary.

There, Etzali meets an old comrade in Xochitl, who only joined MEMBER in order to gain the opportunity to fight and kill him for betraying their organzation (the South American one, not MEMBER). 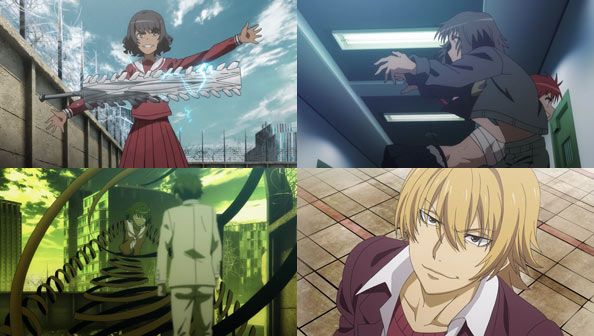 Xochitl comes with a full head of steam, but her choice of weapon – an aztec sword that isn’t metal, can’t cut through bone, enabling Etzali to use his arm to block without totally losing that arm, and knocking her down. Tsuchimikado and Musujime get beaten up by BLOCK’s right-hand woman Teshio Megumi, but Musujime regroups and despite accidentally teleporting her feet and ankles into the floor, manages to get the upper hand on Teshio.

Outside, Xochitl begins to unravel as if her body were an unfurling bandage, as she used a grimoire to transform her body into a living weapon, and it’s now at its limit. Etzali intends to keep her from dying, but we don’t see the result of that as he meets up with the other members of GROUP inside.

Finally, Kakine Teitoku, having easily defeated the MEMBER member who attacked him, beats the location of ITEM’s hideout out of Frenda, and heads over there, likely to do more damage to that group. In short, a lot of groups got tangled up this week, and a lot happened, but Crowley and Academy City are still safe…for the moment.