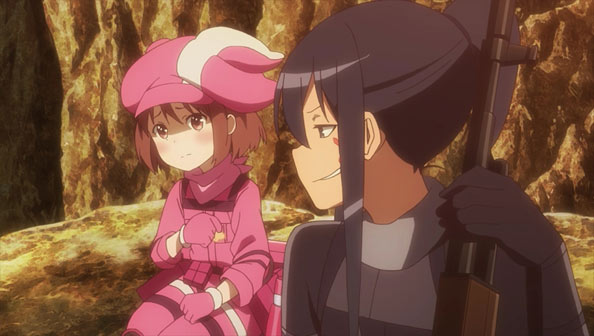 GGO’s first episode thrust us right into the middle of the Squad Jam, while the second took us back to Karen first got into the game. This third episode continues the flashback, bringing us up to the start of the SJ.

But since the result of the SJ is a foregone conclusion, the extended set-up felt superfluous, while calling attention to the fact it would have been a more effective episode had we not known how the SJ would unfold—that is, if the order of episodes had run 2-3-1 instead of 1-2-3.

Pitohui hooks Karen up with M, who seems way too into tactics and ways of killing, leading Karen to wonder who he really is IRL, and what form his relationship with Pitohui takes.

But rather than explore any of that, the M we meet here is bascially the same gruff, no-nonsense, yet still patient and affable lug we met in episode one. There’s nothing new gleaned here; he’s still a big mystery.

However, perhaps the most important goal of this episode wasn’t to establish the stakes of the SJ, but to pivot Karen from an IRL activity that wouldn’t have furthered her social skills (going to an Elsa concert with her old friend) to an activity that would (pairing up, training, and going into a battle royale with someone she just met).

Whatever GGO is to M, Pitohui and Karen are alike in that it’s an escape, and an opportunity to do things they simply cannot do IRL. Karen takes that further, intending to use her newfound freedom as a pink-clad chibi in GGO to change herself IRL, and to find a way to connect with people despite her great height and the anxiety towering over people causes. 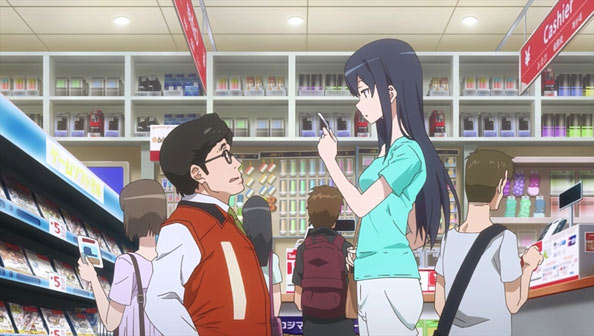 GGO backtracks a few months to when Kohiruimaki Karen, an uncommonly tall college student from Hokkaido now living in Tokyo, learns about the post-SAO VRMMORPG craze in which players no longer have to worry about getting trapped in the game and dying. Karen seeks escape from her height.

Personally, I find Karen statuesque and gorgeous, but as I’m of average height IRL, I can’t really judge someone far taller or shorter than the norm for having a complex about it. In Karen’s case, she has difficulty making friends, and is constantly being gawked at. 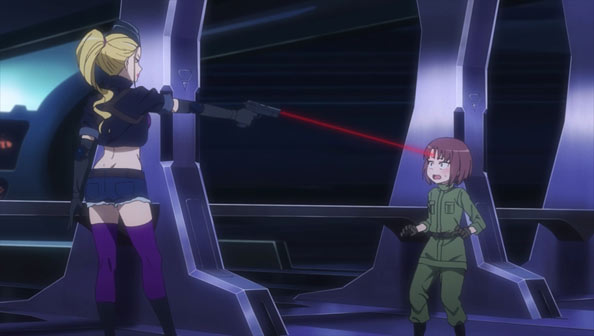 One of the friends she does have recommends ALfheim Online, but no matter how many times she converts her avatar, she ends up with someone big, tall, or both.

She eventually ends up in Gun Gale Online, not knowing much about it, and after some rough training sessions, eventually finds out she’s proficient with a submachine gun. More importantly, she’s tiny and cute.

Karen, or rather LLENN, leans hard into the cute angle, covering herself in pink from head to toe along with her gun, and finds a sweet spot in the pink desert where she can use her small size and agility to start earning a rep as a vicious PK’er.

She also attracts the attention of one Pitohui, a seasoned GGO veteran who’s been around since the game was launched. But rather than kill her, “Pito” suggests they become friends and team up; apparently the GGO gender balance is quite lopsided in favor of men.

LLENN and Pito become fast friends and form a two-person team, and even set some conditions for meeting one another in real life. Something tells me LLENN’s mentioning of her favorite singer Kanzaki Elsa to Pito, and Pito’s lack of a response, suggests she might actually be the singer IRL, which would make their live meet-up that much more special for Karen.

And that pretty much does it for this episode. It sets up who Karen is, why she became LLENN, and how she met her first friend in GGO, leading right up to the start of the Squad Jam. We also briefly see the group of girls we saw in Karen’s living room watching her play, suggesting she eventually befriends them all, and that getting into VR MMOs was a good way to meet people without the stigma of her stature.