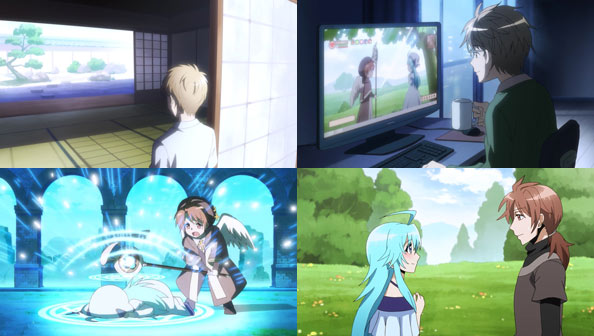 Sakurai Yuuta was adopted by a wealthy, elderly couple. When they passed away they left their sprawling home to him, but he moved somewhere more reasonably-sized, both because he couldn’t maintain it himself, and because the empty house only intensified his loneliness.

And in KanterSG, he met Yuki, whom he strongly suspects to be Molly/Hayashi/Morioka, despite the perceived ridiculousness of such a coincidence. To find out for sure, he decides to rely on whether she remembers him as he was, by adopting the same look as his KanterSG character, Harth. 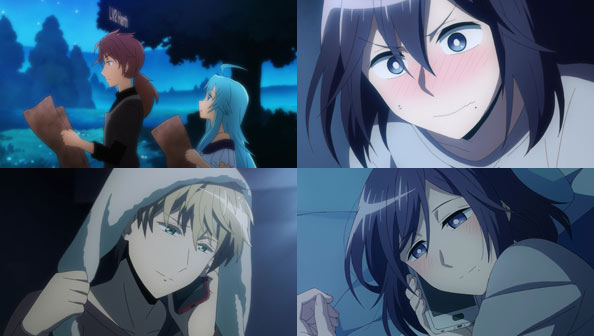 At first, it seems to Sakurai that he might be mistaken, as Yuki doesn’t seem to react to the name “Harth.” However, she actually has, she just needs a little nudge to start the memories flying, and that’s hearing him pronounce it. After logging out, Morioka calls Sakurai to ask if he ever knew a character named Yuki, giving Sakurai the opening he needs to say it was him.

The ensuing phone conversation is one of the most adorable—and best—things this show has ever done; the elation of both Sakurai and Morioka at the news they’ve always known each other positively radiates through the screen like warm rays of light. Morioka’s torrent of expressions and gestures are wonderful to behold.

Unfortunately, Sakurai’s phone dies before he can volunteer one more crucial nugget of info: that he’s not just Harth, but Lily as well. 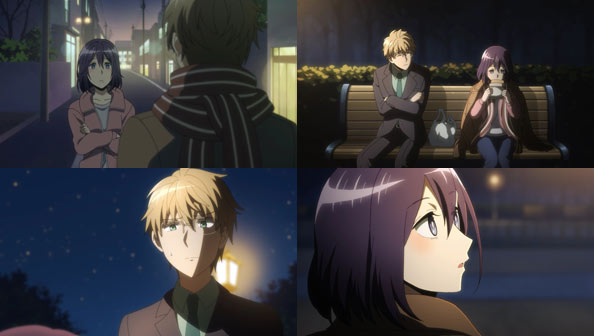 Morioka and Sakurai bump into each other in the street, and act in that combination of awkward and giddy that you expect of two people who suddenly find themselves much closer. Sakurai offers his coat and a snack to a hungry Morioka, whose stomach-growling reminded him of the time they both ordered Christmas chicken at the convenience store.

When Morioka starts to go on about Lily, how much she reminds her of him, and how they should play FdM together as a trio sometime, Sakurai must tell her the truth, and he does: he’s Lily. Morioka’s reaction seems to be of surprise if not shock, but unfortunately we leave things right there.

How will Morioka feel about Sakurai having kept the truth from her for so long? Will she be mad at him, or, more likely, blame herself for not having figured it out, even though she was aware of the similarities? I don’t know, but I’m excited to find out, and glad the show and its couple got to move forward as much as they did here, with just two episodes remaining. 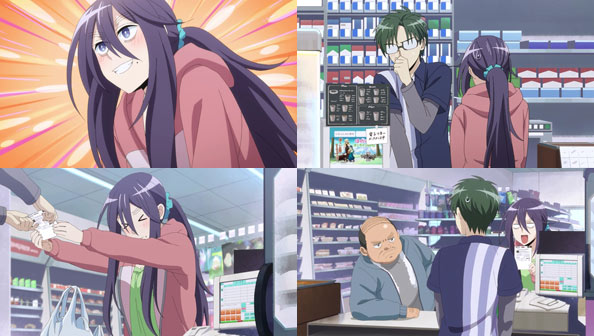 A new series of cute loot and a bonus point campaign spur Morika, already in high spirits upon becoming partners with Lily, to splurge a little. Only a happy circumstance takes place at the convenience store as she has to wait a few minutes for the store’s e-money system to boot.

Those minutes are spent suddenly learning that the store clerk is also a fan of Fruits de Mer, and goes on and on about it in a way Morioka find very fulfilling. They have so much fun talking, the clerk neglects the fact there’s a guy who needs his cigs! 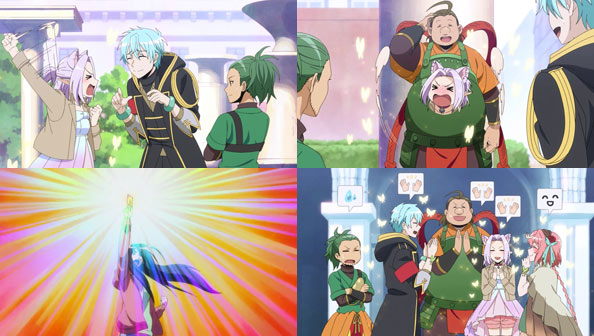 Even so, it was exhilarating for Morioka to finally talk with someone about MMOs in real life. In the game, Hayashi encounters Kanbe and Lilac, the latter of which has just gone to the loot outlet and picked out some stuff that’s very fluffy and cute, but Kanbe prefers what she usually wears.

We also meet Lilac’s real-life player, who both laments not having snatched up Hayashi as her partner and seems to have a bit of a spark with Kanbe. Hayashi manages to score both rare and common loot, but lucky Lily takes the cake by scoring the whole set.

When in-game, NjS packs a lot of neat details, like the way Lilac sees Hayashi as a sensitive guy (compared to Kanbe) rather than what he actually is—a she; Pokotarou suddenly spawning in the same space as Lilac, obscuring her avatar; or Himeralda’s player playing as her husband, who plays Pokotarou; a surprising and clever occurrence. 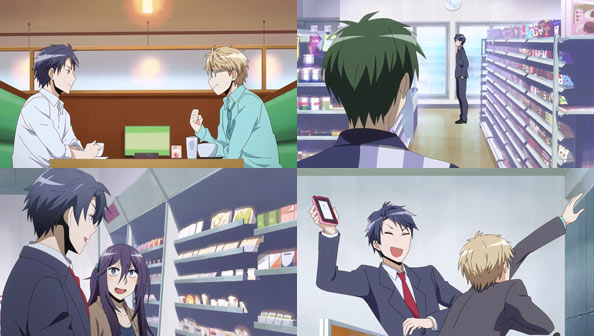 But NjS makes good use of both of its worlds, and seems really balanced this week. Sakurai is depressed about not being able to see Morioka, and as he lists off all the ways he’s tried, Koiwai rightly suspects him of stalking, which isn’t good.

But then…Koiwai stakes out the convenience store, bumps into Morioka as planned, and works his businessman magic. Morioka is initially like, “why is this guy talking to me?!” and rightly so, even if she weren’t naturally shy; but once they get to talking they establish a quick rapport, though Koiwai comes off as a little pushy in gaining her contact info.

When Koiwai shows Sakurai what he’s done, how he managed to get a date with Morioka, Sakurai’s expression is of shock, which if the camera had lingered would have surely turns to dejection. Is Koiwai simply helping Sakurai out, or does he want to date Morioka? I hope it’s the former; besides seeming like a nice guy, what kind of friend would stab him in the back like that? 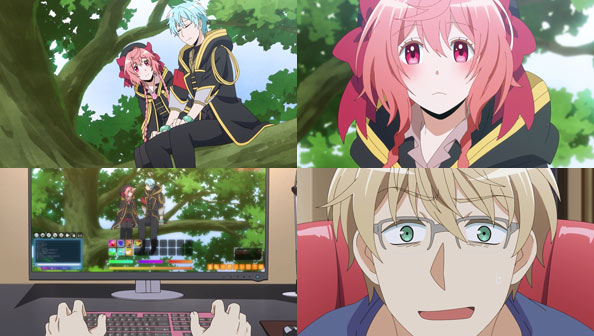 That brings us back into the game, where Hayashi goes to a, yup, dejected-looking Lily, who reminds them that since they’re partners, he can come to her to talk any time. Morioka, through Hayashi, words things very carefully in telling Lily the story of how she ended up in the hospital on an IV all the way to accepting a date from a former work colleague.

The coincidences are far too many, and Sakurai is no fool; he connects the dots, flipping Hayashi’s gender to make her Morioka. Now all he needs to do is believe the deduction he’s just made and proceed from there. After all, despite thinking he’s had no contact with Morioka, all this time he’s had all the contact, and they’re already partners, for gosh sakes. It’s high time the RL players need to catch up to their MMO counterparts. 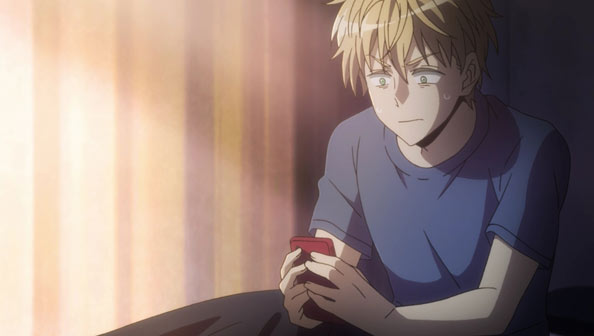 Sakurai receives a reply from Morioka first thing in the morning, and he looks nervous, but also excited. We later learn that it’s a gentle and respectful decline on his offer of dinner out of a misplaced sense of not wanting to “cause any more trouble” after he did so much for her post-elbowing. But it’s pretty clear Sakurai wants “trouble” from Morioka. Why offer dinner in the first place? 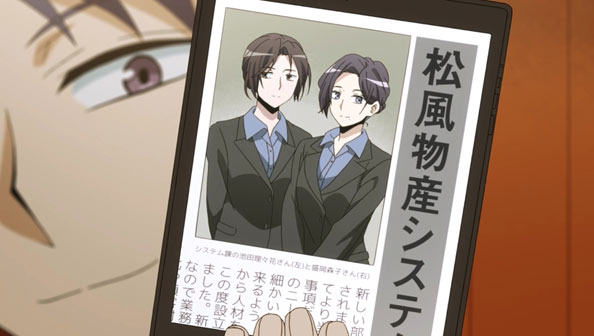 When he does research on her career at a prestigious Bussan, he learns both from his own research and his co-worker Koiwai (who interacted with before) that Morioka was an exemplary employee and businessperson…who suddenly resigned. A old photo of her confirms she’s the one he accidentally knocked over.

Perhaps he’ll learn, as we have, that despite being damn good at her job, it just wasn’t something she wanted to do anymore. She wants to be a NEET and play MMOs now, and if she can afford to, who’s to say she can’t? 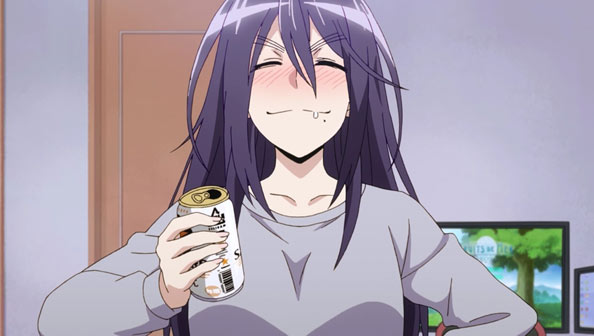 I’ll say, from the perfect structure and syntax of her text message to Sakurai, Morioka’s business skills probably haven’t dulled that much. She’s a talented, capable woman. But she does get a bit nervous in any kind of social situations, which is why after sending her reply, Morioka feels as though a great weight has been lifted from her shoulders, and she goes out to buy some snacks, some beer, and some extra points for FdM. 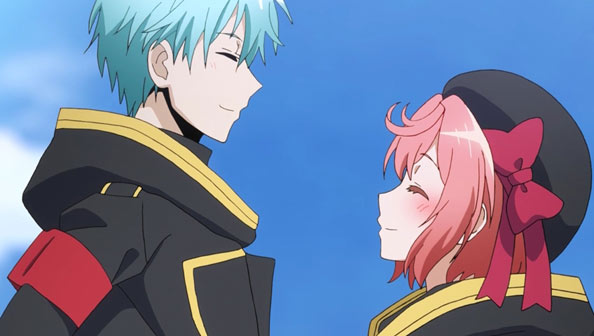 There, she quickly receives a gift from Lily – a super-expensive coat, and wonders what the underlying purpose of the gift was, considering it will be hard to reciprocate considering its cost. Lily is briefly taken aback by the, well, accusation of ulterior motives, but cannot entirely plead innocence. In fact, she’s come to feel a deep connection for Hayashi and wants him to be her partner in the game.

It’s a big step, and even though it may be a while before Sakurai and Morioka connect the dots on who each other are in the real world, it’s a good sign that they’re growing close enough in-game that a truth-revealing real-world meetup won’t be out of the question down the road. Of course, Morioka needs to realize that she’s not the only one using an avatar of the opposite sex.

NjS is getting better and better as we spend more time with “Mori-Mori” and “Sakura-chan;” particularly their moments of victory and elation when things go well for them. The narrative method of switching between worlds rather than going “full-dive” (ala SAO, NGNL, or KonoSuba) also tethers the story and makes it feel more real. It’s a great balance other shows with similar themes lacked. The music’s pretty bangin’, too.