When we begin Aira Kanae’s backstory, she’s just an ordinary high schooler riding her bike to the dojo…but she’s too good. She surpasses everyone, and becomes head of the Aira-style school, and is put to work as a warrior. The practicalities of a hand-combat specialist in bullet and grenade-strewn war zones escaped me, but apparently she’s just that damn good.

The hypocrisy of the war-torn world starts to weigh on Kanae, until she finds that drinking lets her forget so she can move forward and kill more efficiently and viciously. She engages in each successive battle drunker and drunker.

She’s kicked out of her dojo for abandoning the teachings. Heck, she abandons everything, including her humanity, and reason, all to become an unstoppable raging beast—the Tora of the present. But I’ll admit: watching Kanae drink, kill, and repeat got a bit repetitive (even if that was kinda the point).

I can’t say I got a whole lot out of her backstory, aside from the fact that she can only be an effective warrior by killing her brain cells. She also doesn’t seem to have a wish in mind after victory. 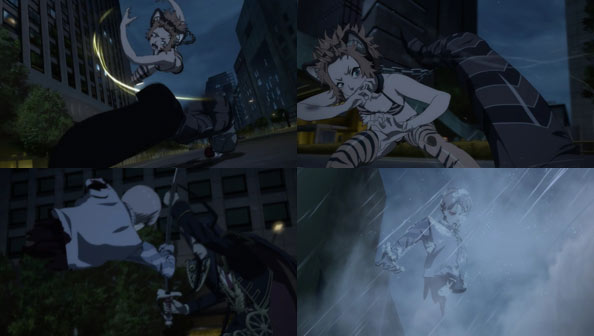 Tora remains in a temporary alliance with Ushii (Ox) this week as they face off against Zombie Snake and Zombie Dragon. Oh yeah, Usagi used Sharyu to propel himself into the sky and kill Dragon, then make him another member of his little team. So while there are only two twins, it’s essentially four-on-one against Tiger and Ox.

The resulting battle has some of the smoothest and most interesting motion to date, though it’s pretty clear when the characters are drawn and when they’re CGI models. Still, the battle looks great, even if it only lasts a few moments, as Tora busts open Dragon’s tank of liquid nitrogen, which takes out both Dragon and Snake…at last.

That leaves Usagi on his own against Tora and Ushii, and they charge at him and appear to tear him to pieces…but I’m not convinced he’s dead by a long shot. He must have something up his sleeve, as well as a reason he didn’t involve the very capable Zombie Sharyu in this encounter. Indeed, his red eyes may indicate he himself was never “alive” to begin with.

Of course, Tora and Ushii believe he’s dead, which is dumb, and prepare to duel one another. It doesn’t help these purported elite warriors’ credibility to have such gaping blind spots all the time. As for Rat, the last character shown in the end credits, he’s still alive, somewhere. Could he end up being the last warrior standing?

Juuni Taisen finds itself at the bottom of the Fall 2017 barrel, and while that’s due in part to an overall above-average season, it’s also due to the show’s own up-and-down, variable quality.

When there’s an interesting warrior’s story being told parallel to the present events of the battle, it’s a good watch. But when present events are halted in order to deliver even more backstory on the Tatsumi Brothers, who are boring…it’s a bit harder to get through.

In this interminable outing, there’s another “flashback-within-the-flashback” as the brothers are put on trial (in what looks like the Supreme Court) for acting far beyond their purview as warriors.

The defense (which Dragon provides himself, but seems to include two of the judges?) note that they’ve done a fair bit of Robin Hood-style stealing from the rich to give to the poor, and even sponsored a little kid by funding the procedure to restore his sight, only to kill his big brother on an evidence and witness-liquidation mission.

Neither the trial nor the events it covers really tell us anything new about the Tatsumi Brothers. Even when they’re doing good deeds, it’s basically for the same reason they pull off heists: to kill time. These guys don’t really seem to have any real motivation in life, except to stay occupied.

We only get about five minutes of time in the present, during which Ox’s saber sparks ignite Tiger’s alcoholic mouth-foam (no one has ever combined those eight words before), and Ox learns Zombie Snake can be killed with fire. The brief Ox-Tiger alliance proves successful, though Ox promises a proper duel with her at a later date.

Meanwhile, high above the fray, Dragon seems to be preparing to team up with his brother Snake one last time (despite dead Snake being loyal Usagi now), hoping he’ll destract the others while he prepares a “memorial” for him, which I assume will involve Dragon’s signature ice.

Unfortunately, most of this episode felt like filler.  I await the backstories of Ox and Tiger, which will hopefully be both more interesting and less long-winded.

We finally get a bit of story on Snake and Dragon, the only two warriors who came into the Juuni Taisen as a built-in pair of allies, at least until only the two of them were left. The older Dragon is more serious and into hacking, while the younger Snake has a little less caution and prefers to do the smash-and-grabbing.

When the two learn they’ll be in the Taisen, fighting in a battle where there is only one person left standing, they’re…mostly fine with it? I guess? I mean, neither seemed interested in going against the path laid out for them. Of course, we learn that being matched pair going into the battle meant absolutely nothing against the psychotic Usagi.

If Dragon can barely muster a shrug at the death of his younger brother, um…why should I? These two are probably the most boring of the twelve warriors. 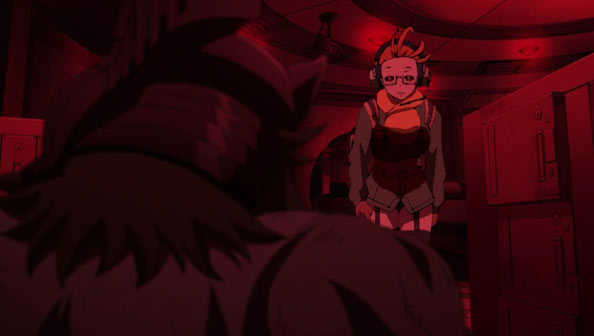 Sharyu is more interesting even as the undead servant of a necromantist, as Usagi has her collect the expired Uuma from the bank vault, likely to make yet another servant. He’s really running the table here.

Tiger’s talents seem to include being able to consume an infinite amount of alcohol (though we don’t get her story this week) and striking how and when her opponent least expects it, owing to her drunken-fist style.

In this case, her opponent is the headless Snake. She easily snatches his fuel tanks from him, and then…starts drinking them. Why she just assumed it was potable alcohol (and not de-natured or, worse, gasoline) I don’t know, but perhaps she could smell the difference?

Ox drops in on the headless, tankless, and one armless Snake…and then takes his other arm, and threatens to take his legs too. Why the “genius of slaughter” is being so sporting with a corpse is a bit beyond me; all he does is make himself a sitting duck for the instance when Snake’s disembodied arms fly out from the darkness and put a choke hold on both Ox and Tiger.

Ox ignites Tiger’s flammable mouth foam, seemingly incapacitating the Snake but also seemingly burning Tiger. And above it all, watching closely, is Dragon, still alive, but not seen since the opening meeting.

At this point, I’m starting to wonder if anyone will be able to succeed against Usagi, his growing legion of corpse friends, and his bottomless bag of underhanded tricks.