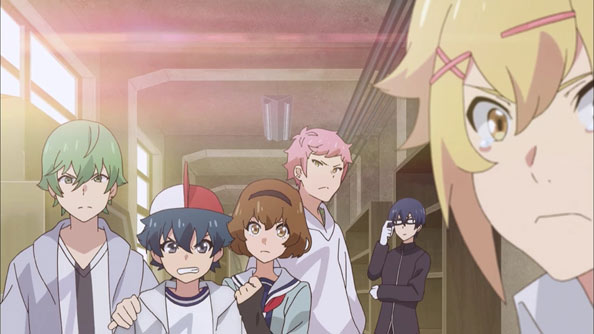 As expected, the StuCo takes one final infraction as an excuse to shut the Hero Club down. Locking up their clubroom and banning them from helping people inside or outside school, on pain of expulsion. That infraction? Allowing a non-student in “Setsuna Kirito” on school grounds during the festival.

Mizuki might’ve had a chance to clear things up, but to do so would’ve meant breaking her promise to keep Futaba’s alter-ego a secret. Besides, they would have found another excuse anyway. With the club shuttered, Sekiya is attacked by an unknown entity, while a rash of thefts are perpetrated at school. 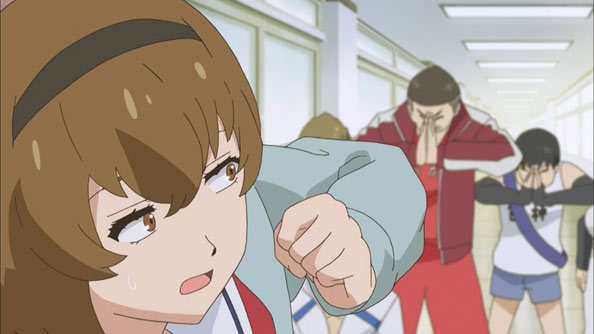 Mysterious thefts and assaults aside, killing the Hero Club was extremely short-sighted (which I guess becomes the StuCo, all of whom wear glasses): all of the school clubs they helped out relied on them being around, and now they’re all in big pinches.

As their normie emissary, Mizuki is the one who has to hear from these parties about how unfortunate it is, but while there’s talk of them giving the StuCo a piece of their minds, that doesn’t take place here, and the other Hero Club members mostly go off and do their own thing, albiet badly because they’re depressed about losing their meeting place and mandate. 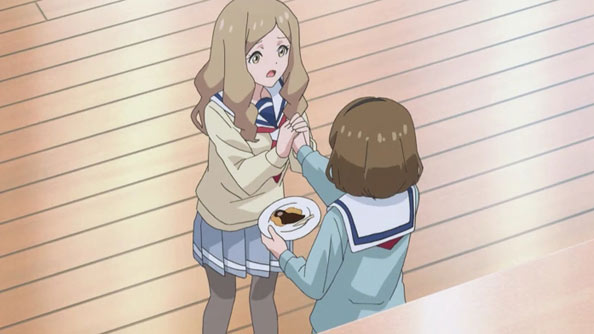 It’s just as bad outside of school, as Mizuki has to turn down a girl who loved Tomoki’s Sora-chan performance and wants him for another one. The elderly folks who the Hero Club helped blame themselves for relying too much and getting them in trouble, which Mizuki has to reassure them isn’t the case.

Whether in or outside of school, the Hero Club was a vital resource whose importance belied the eccentricity of its members. Disbanding them left a huge void in the fabric of both school and community. After partnering with Mizuki and a member drama club to help out the Sora-chan girl, Nanako assures Mizuki that together they’ll find a way to rescue the Hero Club from the StuCo unjust and reckless judgment.

They certainly have public opinion in their favor. As for the mysterious culprit of the assault and thefts, that’s something the StuCo seems incpable of solving. They may have no choice but to rely on the rule-breaking weirdos they loathe. 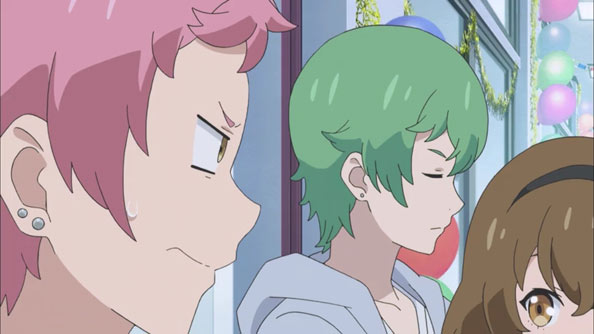 When Mizuki gets a break from serving at her class cafe, Rei asks if she wants to wander around with him, but Futaba hijacks the opportunity by tagging along so the three can scout the competition. That includes Kazuhiro’s class’ haunted house, which wigs Rei out to no end. They then help the drama club hand out flyers advertising the impending play. 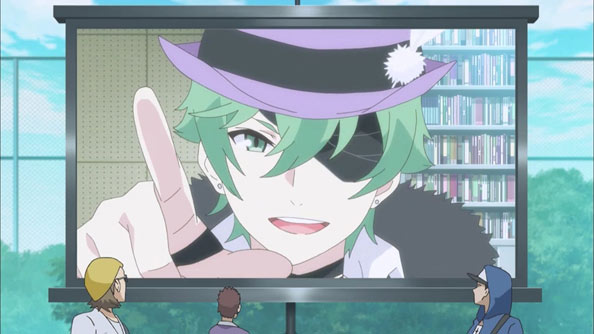 When the play is about to start, Sekiya takes the outdoor stage and poaches their audience, breaking the rules in the process. Futaba turns the tables by appearing on the screen behind them as the web-famous Setsuna Kirito, who urges everyone to head to the gym for the performance, which they all dutifully do. 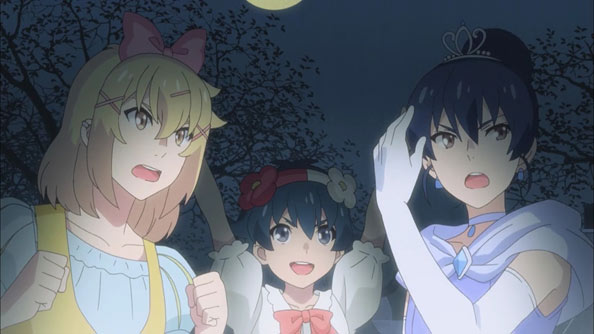 The crowds are charmed by the cross-dressing princesses, as expected, but when there’s a sudden blackout, instigated by Futaba, they must call upon the audience to light the stage with their phones and help defeat the witch. A fun time is had by all (except Sekiya, who is punished with wood-chopping duty) and the drama club wins the competition, meaning they won’t be shut down buy StuCo. 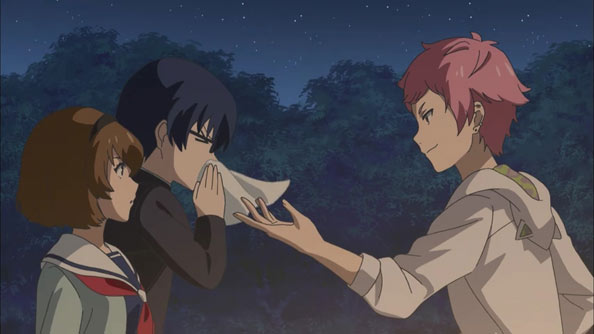 That night at the bonfire, Futaba confesses he’s a full-fledged otaku, and vows not to hide it anymore, though that costs him a dance with two girls who like him.

Rei asks Mizuki to join him in the folk dance, but again she’s distracted by another friend. Perhaps she’s hung out with these attractive weirdo boys so long, she’s oblivious to the fact that one of them wants to spend more time with her and only her. With only two episodes left and the hero club’s future still in doubt, it’s unlikely that will change. 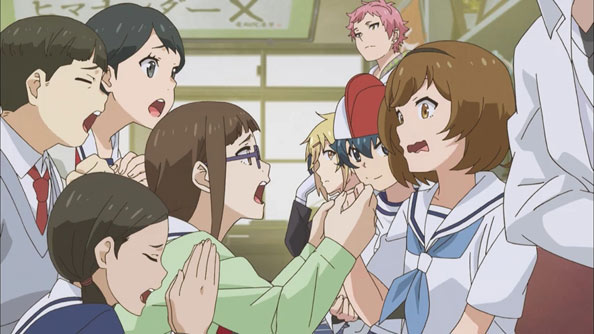 When no new requests for help were coming into the Hero Club, I assumed that the StuCo had finally commenced implementation of their plan to bring the club down. But then the Drama Club bursts in and begs the club for help so that their club won’t get shuttered by the StuCo.

They present their request as you’d expect a drama club to do so: dramatically, demonstrating a lot of shared qualities with the Hero Club members. The Drama nerds clearly see that potential too, and so have big plans for them. 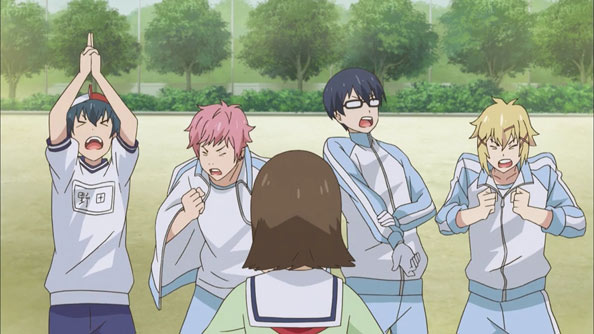 While the Drama Club runs into a few snags—Kazuhiro won’t run, Yamato can’t remember his lines, and Futaba refuses to take the stage—they mitigate these problems as they come, and before long the operation is a well-oiled machine.

The Drama Club prez even manages to get Rei to believe the “prince’s horse” is an absolutely vital role! Mizuki also discovers that Futaba may have a side-hobby of posting videos in which he performs songs…rather uniquely, but doesn’t immediately put two and two together (another sign of anime-vision). 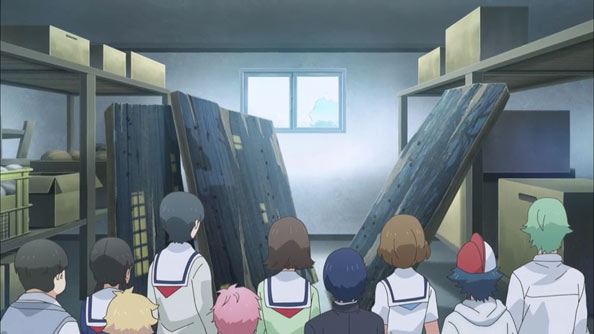 Throughout all of this, I was wondering where the StuCo was…they’ve been stalking the Hero Club all this time. Were they the ones who created this situation for the Drama Club; in order to keep the Hero Club busy on campus so they’d do less damage off it? We will see.

Then there’s the odd emergency of the wrecked scenery with one day left. A group of cats is blamed for the damage, and Futaba pulls everyone together and makes new scenery, so I’m not sure what the point of the emergency was! With three episodes left, I imagine the final showdown with StuCo will take place in the final episode or two. Until then, there’s a show to put on! 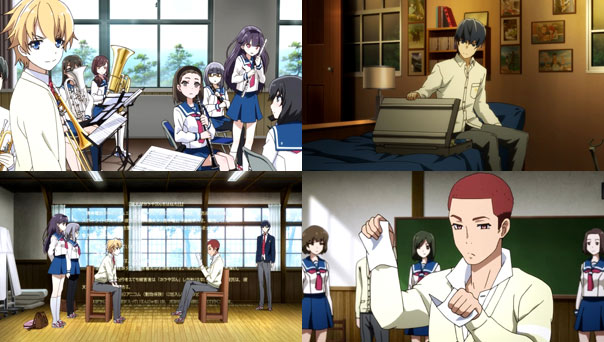 Haruta and Chika’s lame love triangle continues to be an ongoing problem with HaruChika. If it were a classmate they both loved, male or female, that would be one thing; the fact their object of affection is a teacher all but eliminates the possibility of anything actually going anywhere. It doesn’t help that said teacher is a walking snooze-fest. I simply ain’t buying what either the show or its two title leads are selling.

But hey, at least that triangle is only a peripheral element of the story. This week, the show once again focuses on a new character, Sei Maren, who doesn’t get off to a stirring start with an opening line like “Where is the step I should take to move forward?” Whoa there, Proust.

He also has a whole built-in story, with a Life Box he opens sometimes to stoke his angst! Haru, Chika, and Miyoko encounter him in drama club, looking lost (and not at all good at drama, as the leader Nagoe admits frankly). 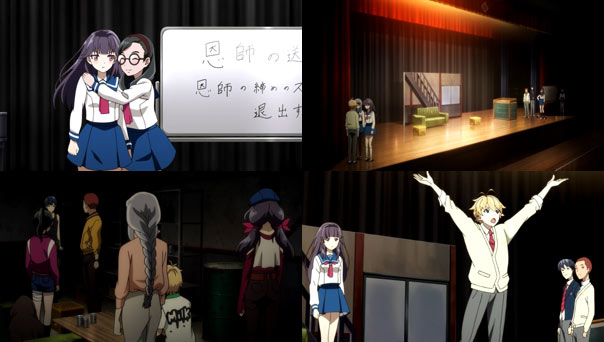 So this Sei guy has a personal problem, and people are worried about him (particularly Miyoko, randomly). So what does Haruta do? Write a play that will “make everyone happy.” Only Nagoe rips it up, and the drama club and brass band get into a little exchange of unfriendly words, resulting in a challenge that will be settled on the stage.

The subsequent dramatic “exit game”, in which Haru, Chika, and Miyoko square off against Nagoe, Sei, and their star actress Yaeko (who does a fair impression of Princess Mononoke), is actually the niftiest part of the episode. It has all six “actors” essentially straddling two different worlds, gradually adding to the complexity of their setting and situation in order to get one of their opponents’ actors to exit stage right. 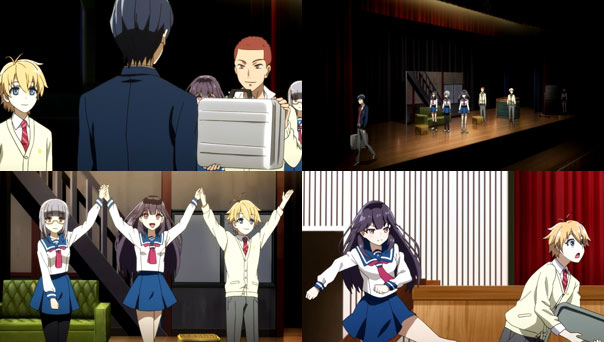 Of course, it ain’t perfect. Haruta shows yet another skill he’s good at – acting and improvisation, as well as being nigh telepathic about Sei’s personal concerns, not helping his annoying Gary Stu status. Many of his lines in the exit game are a little too on the nose, to the point of being cruel to Sei. But more than what he knows and probably shouldn’t, it’s just deeply troubling how meddling this guy is!

He’s such a busybody, interfering in others’ lives and being as coy and dramatic about it as he can, in this case literally. They also somehow stole Sei’s Life Box from the closet in his room! WTF? (Note: I don’t want to hear a rational explanation for this; it’s just silly.) And Sei’s feelings about abandonment are far too easily quelled by Haruta and Nagoe’s intrusive charade.

As for Miyoko’s apparent feelings for the guy, well, she must see something I don’t, which is to say she sees…something, period.

Haruta also didn’t have to keep Chika in the dark…but of course he did, because he’s a jerk! So when Chika kicks him and sends him careening to the earth, it’s highly satisfying. I LOL’d. It’s like she’s kicking the little twerp not just for her own sake, or for Sei’s, but for all of us. 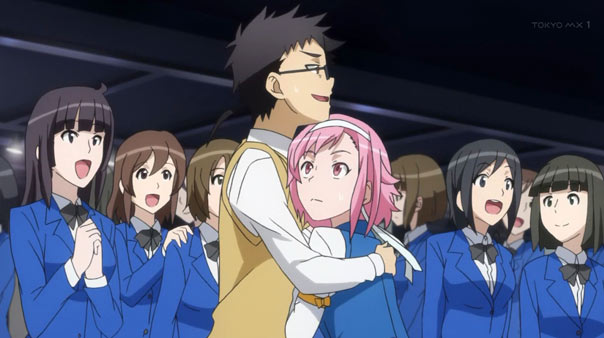 As the festival continues, Tenchi continues to find himself the center of attention, as if it’s all been planned or something… >_> … <_< …First, Gooriki makes a return, though this time he’s tame enough to hold an egg without breaking it (cue Victory Fanfare!) Tenchi is initially spooked, and instinctively holds Momo tight once again. What is going on with him? 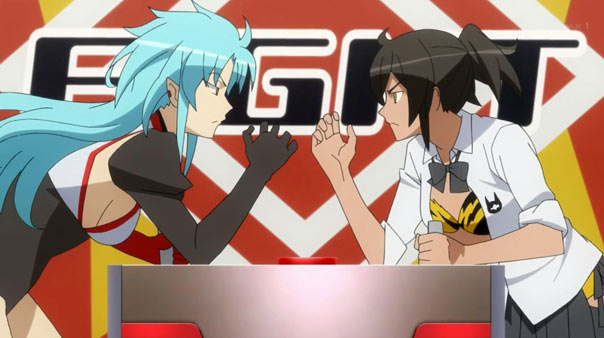 When Beni spots Tenchi, she allows him to cut in (the ridiculously long) line to arm-wrestle with her, no doubt remembering when he stopped her blow like it wasn’t no thang. Frankly, I would have loved to see him beat her, but Ryouko doesn’t allow it, and she wrestles with Beni instead. They nearly rends the earth asunder, but end up in a draw. 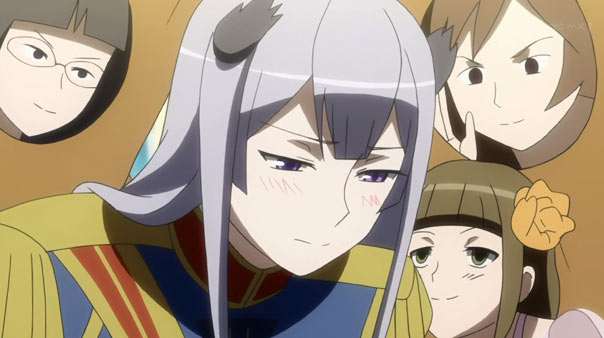 Ryouko tossed Tenchi aside, and he landed in Gooriki’s eggs. Gooriki then threw Tenchi even further aside, and he lands in a coffin, which turns out to be on the trap door of a stage where Hachiko is performing as the prince. The script says she’s to kiss the person in the coffin, and her fellow actors egg her on to do so, though she refrains from doing so in this episode. Lots of simple but neat little cause-and-effects and callbacks going on this time. 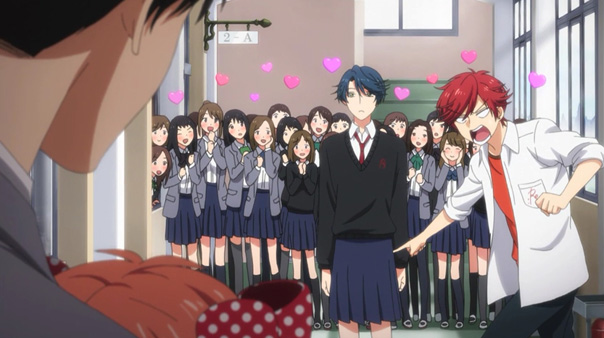 This week introduces us to two more characters who appear from the OP rainbow heretofore unknown to us: the short-statured drama club president Hori Masayuki, and the dashing, statuesque, academically and athletically gifted “Prince of the School”, Kashima Yuu. 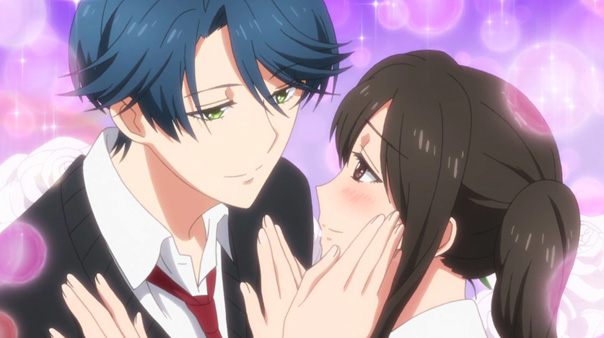 With six of seven listed main characters now introduced, rankings are inevitable, and sadly it’s been a game of diminishing returns. We like the pair of Chiyo and Nozaki the best, followed by Mikoto and Yuzuki, and finally Kashima and Hori. And we like Kashima considerably more than Hori. Hori’s a bit of a dick! 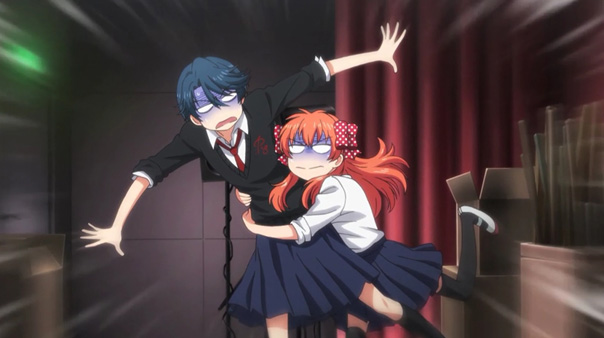 Maybe he’s a great actor trapped in the wrong body, and he’s got that chip on his shoulder. He certainly likes Kashima far more than he lets on and genuinely wants her to shine on the stage (which she does). But what’s with all the physical abuse? None of the instances where Hori hit Kashima were what I’d call abhorrent…but they weren’t that funny, either. 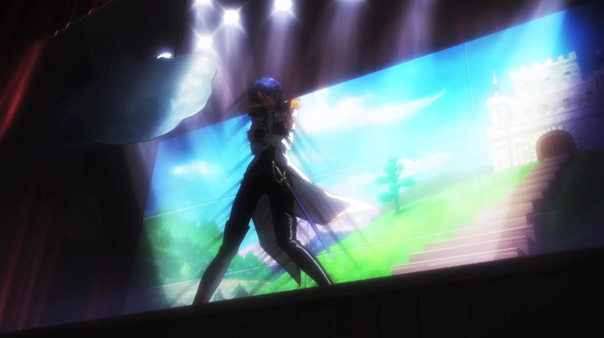 Let’s just call them..awkward, shall we? If she’d hit him back once or twice, maybe it wouldn’t have rubbed me the wrong way, but it’s very one-sided and repetitive: she pisses him off, he draws blood. Too often Kashima came across as a big dumb lovable punching bag for Hori’s frustrations, which overshadowed her more positive qualities and sapped some but not all of the comedy.