This week’s Zestiria still shined in the technical and aesthetic sense, but it felt a bit mechanical, perfunctory, and inevitable, like very practically moving pieces on the board closer together. In this case, it was uniting Sorey/Lailah/Edna with Alisha, and then with Mikleo and his new mascot-like friend Atakk, a Normin Seraphim specializing in powering up other Seraphim like Mikleo. 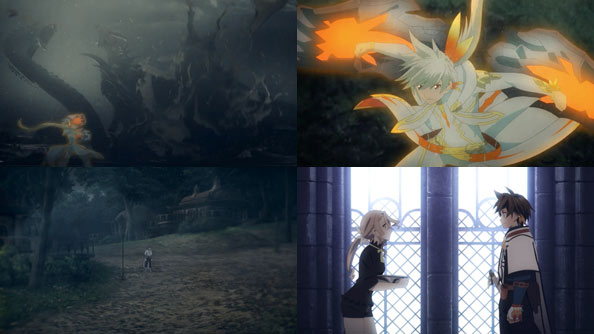 We learn of the cause of the storm that blew out the bridges (an Ouroboros) but that boss is soon usurped by a drake (or baby dragon) who is the cause of the malevolence that is sickening and killing the people of Marlind.

Alisha isn’t particularly useful this week, as her attempts to heal the townsfolk with medicine have no effect, to her frustration. However, sometimes it’s about who you know, not what you can personally do…and Alisha knows Sorey, who is happy to help. 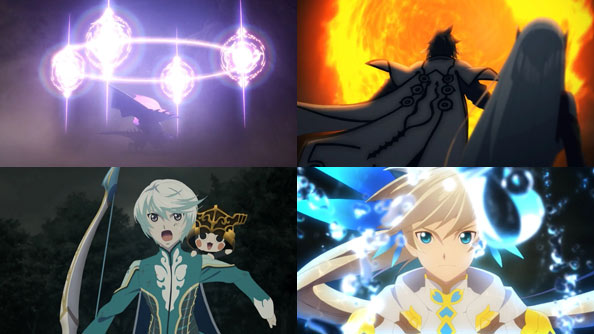 Edna and Lailah aren’t enough to help Sorey rid the city of the drake’s reign of terror; it takes the sudden arrival of Mikleo, whom Sorey can sense and knows everything will work out. Forming a quick sub bond with Sorey and Lailah, Mikleo’s power turns Super-Sorey blue, and they take out the drake with a purifying water-based arrow.

The drake is toast, and the clouds around the city part. It’s good to see everyone back together, and the episode looked and sounded great as usual…but it also felt very neat and tidy, and after last week’s scrap with Eizen, the enemies seemed like pushovers.

There’s also the looming certainty that if this series wraps in three weeks, a satisfying solution worthy of all the buildup won’t be forthcoming. I’m hoping, as with F/s n, the story will continue after a season or two off.