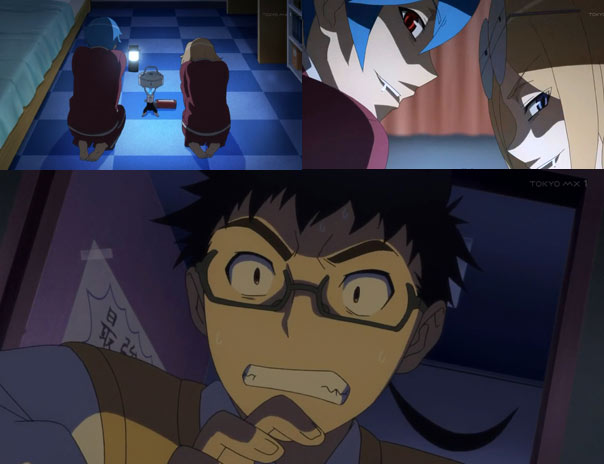 Tenchi patrols the hallways after lights-out, notices lights on, and discovers Yuki and Rui bent over some contraband ramen like a couple of junkies. However, they offer him a cup and he goes easy on them. As they tuck in, Tenchi learns a lot more about the Science Club girls.

For instance, while Fuka built Gouriki’s basic structure, she has no idea what powers him; that Kinojou isn’t technically a club member and has no memory of her past, and Fuka and Rui are simply helping her look for…something. Gouriki’s head’s “treasure detector” indicates is below their dorm, but they find nothing and Yuki shoos Tenchi away. 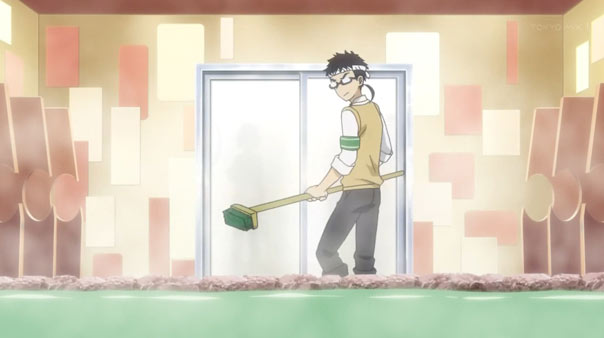 For some reason, Tenchi’s duties as Dorm Supervisor include cleaning the girls’ bath dangerously close to bath time. Why can the girls keep their own bath clean? Like Lost, Ai Tenchi Muyo! isn’t interested in answering questions, only posing new ones, like ‘Why doesn’t Tenchi simply stay out in the open and explain his innocent presence there?’

How about ‘Why is Hana massaging Momo’s boobs when Momo’s boobs aren’t really that small at all?’ It’s not all that surprising the innocent Momo isn’t upset to find Tenchi in there at all, but it is rather odd that the other three student council members don’t notice the fully-clothed guy lurking behind her, especially when he and Momo talk. It’s as if just because those characters are out of that particular shot, they cannot see or hear anything going on three feet away from them! 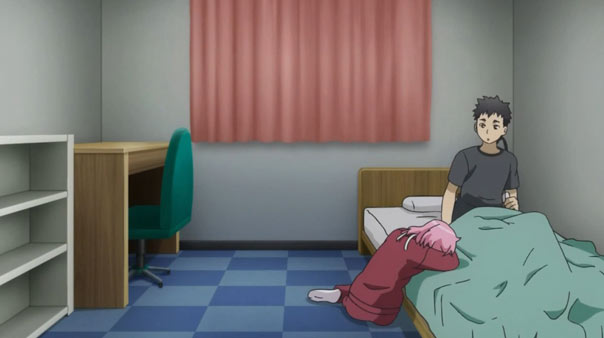 Anyway, enough with cataloging the illogic; somehow, Momo gets Tenchi out of there without him being detected (or drowning). And while he’s in there, Tenchi gains another piece of the school’s puzzle: the student council and science clubs are locked in a struggle for some kind of “treasure”, treasure he may or may not also be looking for. This may be another case of being in the dark because this is my first exposure to the franchise and I have no idea what Tenchi is really up to, but unlike Hatoko, I’m content to stay in the dark and see what happens.

Tenchi has come to a dangerous place, fenced in by barbed wire and covered in “No Trespassing” and “No Boys” signs. Tenchi may be a boy, but he’s also the dorm supervisor, and as such, he must brave the dorm, no matter what horrors await him.

Momo shows him around, and everything is pretty docile, and then they cross paths with Hana and Beni taking full advantage of the lack of a dress code (not that they follow it that closely at school!). Hana seems to be trying to impress Tenchi, while Beni has a perfectly reasonable explanation for her near-nudity: she’s going to take a bath. Thus, Tenchi’s demands that they put clothes on fall on deaf ears.

A less showy plot is also afoot: perhaps in an effort to blackmail/seduce Tenchi to their side, Yuki uses poor, shapely, innocent Rui for nefarious purposes, telling her to accidentally fall off a ladder and into Tenchi’s arms. When a real spider descends in her face, she loses it, clutching Tenchi so close to her chest he passes out. Yup; definitely a dangerous place. For him. For the girls, it’s just home.