Rin invites Nadeshiko to join her at a riverside campsite in Nanbucho within biking distance, but when the appointed day arrives, the usually hale and hearty Nadeshiko comes down with a cold and has to back out! She dramatically tells Rin to leave her body behind and go on without her…and Rin proceeds to do just that.

In the wee hours of the morning, she’s off on her trusty moped to Kamiina, having quickly arranged a solo trip the day before. It’s the first of many instances of winging it in this episode when events take unexpected turns. She’s hoping to shave 30km off her trip by using the Yashajin Pass as a shortcut.

Unfortunately, the pass is closed—not for winter, but year-round to all private motor vehicles in order to protect the environment, something her Maps app did not indicate. Had Rin more time to plan her trip, she might’ve dug deeper, but again, she was winging it, so now she has to wing it again. It’s not a total loss, as before turning around to get back on track she meets a couple of friendly mountain climbers, one of whom gives her some tea.

From there she heads to Tsuetsuki Pass south of Suwa Lake. By then, Nadeshiko is up and feeling better, and is eager to serve as a guide for Rin so it feels more like they’re camping together. Rin is up for it, and soon finds that at times Nadeshiko’s phone is commandeered by Chiaki, who came to check up on her. 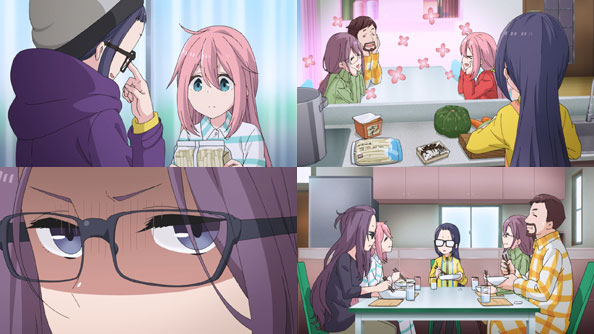 Chiaki also brought Nadeshiko a get-well gift: a pack of houtou noodles, a Yamanashi specialty. Nadeshiko asks if Chiaki, a “true Yamanashi girl”, can make it for her, being a for full authenticity, and Chiaki acquiesces. The thing is, Chiaki’s never actually made it, so she rolls up her sleeves and…wings it!

The pressure is relatively low with just Nadeshiko to feed—she doesn’t seem like the pickiest eater—but when Nadeshiko’s mom, dad, and sister all arrive in sequence the pressure really builds. Fortunately, Chiaki finds a bangin’ recipe by a pro, follows it to the letter, and it’s a big hit, even with Sakura, who despite her look of anger and/or distrust says it’s heavenly and would like the recipe.

It almost feels like the episode itself is winging it in suddenly introducing Nadeshiko and Sakura’s parents after we’d seen neither hide nor tail of them for the past eight episodes. Finally revealing them in order to compound Chiaki’s sitcom scenario was an inspired choice.

Knowing how much Rin likes doggies, Nadeshiko suggests she pop by Kouzenji, a temple that houses the grave of local canine hero Hayatarou, AKA Shippeitarou. One of the benefits of winging it, and putting yourself in the hands of others to guide you, is you never know what unexpected and fascinating things you’ll see and learn!

Rin tries to resist the temptation of the adorable (and ¥500) dog fortunes, but eventually relents, and gains a “decent” fortune…which seems about right! Then she goes to the Hayatarou Hot Springs to thaw out her frozen body. The juxtaposition of Rin sitting in the bath with the mountains in the distance makes for an idyllic, picturesque scene.

Once there, she isn’t sure she wants to go anywhere else, so when Nadeshiko and Chiaki angrily duel via texts over where Rin should eat, Rin once again simply wings it and orders a katsudon set right there at the baths. The other two can both live with the compromise meal. They also get a text from Saitou: she’s in for Christmas Camping. All who’s left to ask is Rin, which Nadeshiko resolves to do.

Rin’s road journey was so long, cold and grueling, and bath and meal so warm and relaxing, she ends up falling asleep right at the table, dreaming of Nadeshiko as the mustachioed master of the legendary Hayatarou, who steals Rin’s salad! When Rin wakes up, it’s past five in the evening and dark out. Looks like she’ll have to wing it at least once more!

I’ve got some nice variety in my Fall watchlist. Food Wars is chugging along, with Souma scoring a big win thanks to his friends; MMO Junkie our elite NEET seems to be where she wants; and in ShoBitch we’ve had a steady, happy couple since the first episode, with all the comedy coming out of their mutual inexperience with being in a relationship.

That leaves Just Because!, the Fall show I’m watching in which people seem to suffer the most without much in the way of payoff. Just take Natsume’s interactions with Souma, trying to be a good friend by helping him get closer to Morikawa, despite the fact she still harbors feelings for him.

An experienced anime watcher it’s clear Natsume is in pain, but Souma’s your typical oblivious guy, and combined with Natsume’s silence on the matter and apparent interest in helping him with Morikawa, there’s really no way for him to question her smiles, even if she’s forcing them.

As a photog, Komiya knows all about smiles…and other expressions, like the one on Izumi’s face as he’s looking at Natsume in a candid photo Komiya took of them. Even after failing her last mission with Izumi (she brought a cat instead of a dog), she says she’ll delete the embarrassing shot if Izumi tells her something he likes about Natsume.

When she says “her awkwardness”, Komiya laughs, because it’s such an earnest, unflattering answer. It is itself an awkward answer, coming from someone just as awkward as Natsume (and, like her, unable to get his feelings to reach the one he likes).

Komiya then proposes another deal with Izumi: she’ll support him in trying to go out with the (former) president, and in exchange he’ll let her submit that photo she took of him, which she believes will win her a award and keep the photo club alive.

Of the five, Komiya is the hardest to read; she comes right out and says “I like you” to Izumi, throwing him off, before finishing with “…as a person”, inviting his ire. She’s clearly there to provide a yang counterbalance to Izumi’s yin main love interest and present multiple possible routes for the various characters.

When New Years comes around and it’s time for a shrine visit, Souma and Morikawa’s friends conspire to flake out on the visit, leaving the two alone. The two have a nice time, though Souma is often at a loss for words due to his stress over the task at hand.

That stress would seem to have been justified, for no sooner does he finally get the words “I like you” out and ask if Morikawa will go out with him, Morikawa…gravely declines.

Ouch…that’s gotta be a fastball to the gut of Souma; all that preparation and anticipation, and at the end of the day, it wasn’t whether he could confess, but whether Morikawa would say yes, and she does not. Another sign Just Because! isn’t interested in doing things the easy way or taking the pressure off its characters. 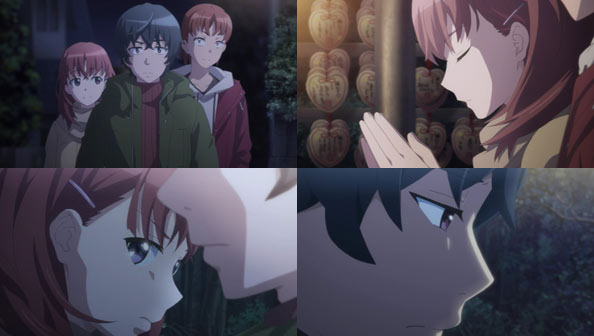 After several instances of having someone—either Natsume’s plucky older sister or Yoriko—be a third wheel, Izumi and Natsume finally find themselves alone, and they continue to circle one another warily, putting on antagonistic airs to conceal the fact both of them have basically the same problem: their first choice likes someone else.

The fact that Souma was rejected is irrelevant here. Whether he wanted her to or not, Izumi is inspired enough by Komiya’s encouragement to at least broach the subject blocking any possible move in Natsume’s direction: her crush on Souma. She brings up exams again and again, which he calls nothing but an excuse.

This may well be news to Natsume, and she’s definitely affected by the look on Izumi’s face as he passes her by to head home. Elsewhere, Souma also retreats following Morikawa’s rejection. Lots of emotions to sort through and pieces to pick up for everyone involved. 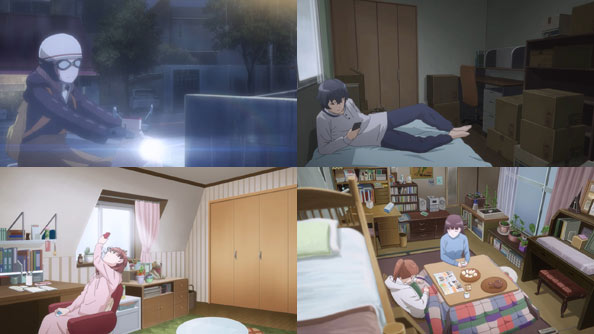 Izumi’s entanglement with Komiya Ena proves all to brief, as she’s forgotten the photo that she wants permission to submit. Showing zero consideration for Izumi, she zooms off on her moped to grab it, and it’s no surprise when she returns, in the rain, to find he’s gone.

The next day is Christmas (?), and everyone seems a bit listless, mimicking the somewhat grayish day with their moods. Izumi and Natsume type messages into LINE, but delete them without sending, seemingly hesitant to make any forward motion that will evoke a response from the other. It’s a stalemate, I tellya!

Things are dreary at Casa Morikawa too, as Morikawa confides to Yoriko that her life plan after high school doesn’t include furthering her trumpet performance, but rather college, a job, and eventually taking over the family business. It’s all said with the enthusiasm of someone inspecting turnips.

Left unsaid is any discussion of starting her own family, and as Morikawa seems almost criminally oblivious to Souma’s feelings (mostly his fault, BTW), that’s not surprising. 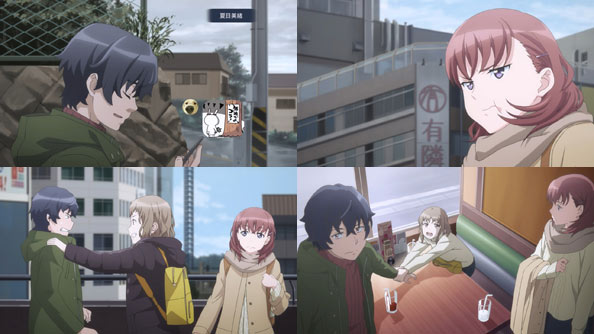 When Komiya reaches out to Natsume for info on Souma, Natsume uses it as an excuse/opportunity to message and meet up with Izumi. When they meet up, they’re still very cold and distant to one another, and the energy completely changes when Komiya spots her elusive transfer student.

Komiya’s casual nature with Izumi doubtless irks Natsume even more, since neither she not Izumi know what the heck they’re doing or what they should do. And while Komiya’s mission to get Izumi’s permission or LINE ID fails, she doesn’t seem like the type to give up easily.

Meanwhile, Souma is invited by Yoriko to join her and Morikawa for a walk, and his resulting meandering bike ride to their location is a constant source of suspense…will he ever get to them?

He does, only to freak out when Morikawa’s dog barks at him, which he thinks is a deal-breaker where dating her is concerned. Frankly, he should be more worried about, you know, telling her how he feels about her and asking her out on a proper date…but who am I?

When Souma reports the dog incident to Izumi and begs him for help getting better with dogs, Izumi tells him he has no pets, but Komiya stealthily enters the frame and offers her help…in exchange for Izumi’s LINE ID, which he gives her.

Interestingly, Komiya makes it clear she’s “over” the fact Izumi didn’t give her permission to use the photo, but with his ID, maybe she’s playing a longer game. Heck, maybe she just likes the cut of Izumi’s jib and wants to be friends…or more, which would complicate the love polygon even further.

Speaking of complications, Souma, unaware of the deal Izumi struck with Komiya, messages Natsume about helping him with dogs, since she has one too. This basically puts Natsume in the friendzone area of helping her unrequited crush get along with his own crush.

Over the most mundane circumstances, and in the absence of direct, honest, face-to-face conversation regarding how people feel about one another, the web of conflicting or one-sided romantic interests grows ever more tangled.